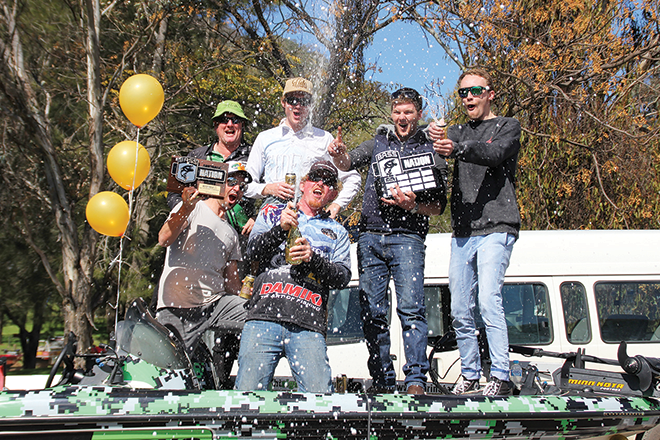 Many hours of planning, decisive time on the water and working with a group of anglers takes months and still doesn’t guarantee a win on Australian bass fishing’s biggest stage. Mitchell Cone has done all this and has an absolute tonne of natural talent mixed with a great work ethic, which is why we saw him crash through the barriers and claim the 2016 B.A.S.S. Australia Nation Atomic Championship against a star-studded field on Lake Glenbawn. An incredibly humble guy who lives and works in Tamworth, NSW as a cattle farmer, Mitchell has competed in the B.A.S.S Australia events since day one, and stepped up last year to become one of Australia’s leading anglers.

The two-day pre-fish presented a number of issues. Many anglers still need to learn how to manage their spots and work hard at figuring out a pattern without disturbing those elusive giants that get caught so many times on practice days. The weather also presented new challenges, with 60km/h wind forecast on the first day. This pushed the group to a new level and we witnessed a small group pull away from the pack after the first and second sessions. Leading after session one was Greg Beattie who put together a great bag of 2.59kg to lead a group of 12 anglers all sitting over the magic 2kg mark and well within striking distance.

The ever-consistent and amazing young angler Dane Radosevic was right behind Greg and Mitchell Cone was sitting comfortably in third place, ready to strike. Weighing in after the first session, it seemed Mitchell was pleasantly surprised with his weight and really didn’t expect to be so high on the leader board, but with only 90g separating him from Greg, he had clear water in front of him come start time in the second session.

In session two, Mitchell really made his move and put together a 2.63kg bag to shoot into the lead after catching bass in an unexpected area. The wind in the first session had left Mitchell’s electric motor batteries all but drained, and he could only fish a small window in his go-to area where he managed a small limit. This was a total blessing, as he kept his head and started using the wind to his advantage, looking for shallow flats with wind blowing across them so he could slowly drift and still remain fishing.

Straight away he hooked a giant using his go-to lure, the brand-new Fish Arrow Flash J Grub in 3” size. The colour of choice was number 114 (a motor oil/silver combination) that has a built-in foil to increase flash. It clearly worked very well on Lake Glenbawn. The tail is also turned upside down and increases the hook-up rate on the extra-strong Glenbawn bass.

Normally the final day of an event can be a struggle. The fishing can shut down, the bite slows and determination can drop. We didn’t see any of that during the Atomic Championship. It felt like more bass hit the scales in the last period and every single angler weighed a bass. Mitchell easily managed a 2kg-plus bag as the last angler to weigh in, and took the win in front of a great number of spectators and anglers.

Big cheers and celebrations started and went on for quite a while, and with some great emotional scenes we crowned the third Atomic B.A.S.S. Australia Nation Champion. The B.A.S.S. Australia Nation Co-Angler Atomic Championship title was even tighter and we had a great turn-out of anglers who travelled a long way both south and north. So many new anglers are entering the circuit and these new anglers just keep pushing the boundaries.

We often see new techniques and tackle hit the competitions through this group of competitors. It seems some people can raise the bar during big occasions, and Garry Harman took his second title in a row from Kyle Lewis in the tightest of finishes. Fishing for the last time as a Co-Angler, Garry had a great year and really challenged for the Samurai Rods Co-Angler of the Year title, saying to us he liked to peak at the right time.

After session one, Garry was sitting in fourth position, with Jill Wales weighing in the largest sack of the tournament to record a 2.72kg bag. Victorian Ben Faro was sitting in second place, with Kyle Lewis in third. Like Mitchell, the second session was when Garry made his move. At the end of day one, Garry had taken the lead, with Kyle second and Jill bumped to third.

On the final day, Kyle and Garry were the last two anglers on stage. Kyle managed a cracking bag and Garry needed to pull the scales down to 2.3kg to win the tournament, but he felt he was a little short of this weight.

However, the scales read 2.31kg in what seemed like a slow-motion moment, and Garry won in front of a cheering crowd.

Garry will also be travelling to the US to compete in the B.A.S.S. Nation Championship come November. He will be representing Australia as a co-angler in the global format tournament. This honour sees two incredible young guns heading over and practising together for days leading into the biggest tournament of their lives.

With the entire Australian bass fishing nation supporting them, we can’t wait to see what they produce on the big stage. So many people deserve thanks after this season. Obviously Atomic contributed so much over the year, and without this company’s help the tournament definitely wouldn’t be as strong. The round and association sponsors have also helped an incredible amount.

Publicity gets larger with every round and memberships just keep increasing in good quantities. Our helpful staff have been fantastic this year.
Lauren Kelly’s media is second to none when it comes to tournament photography and video and Robbie Rayner is growing into a great presenter. Thanks also to all the helpers along the way.

Until next season, this is us signing off for the Atomic Series.

We still have the Haswing and Bluefin Boats Teams Series and Sunline and Lucky Craft Barra Series to finalise, and keep an eye on our representatives travelling to the US. We wish them good luck and know they will be doing their best to challenge the top anglers in the B.A.S.S. Nation Championship.