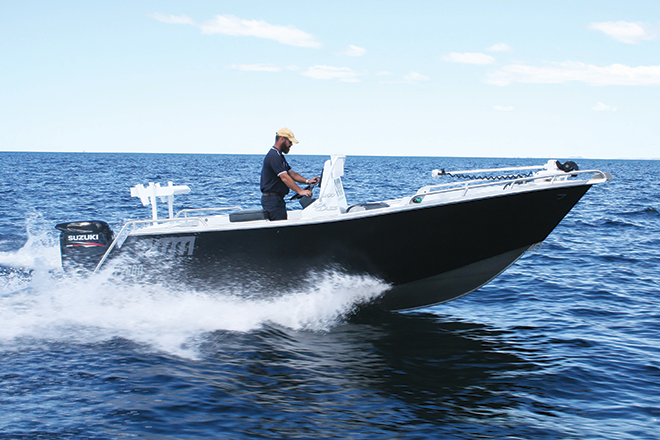 ASK any hard-core bay and estuary fisho what their ultimate boat layout is and chances are they’ll say an open boat with a centre or side console. Brendale-based plate alloy boat builder Australian Master Marine is certainly aware of this and as such recently introduced the Sea Class range of small boats.

Sea Class hulls are available in 4.5m, 4.9m, 5.2m and 5.7m sizes with numerous layouts including centre and side console, tiller steer, runabout, bow rider and centre and cuddy cabin (on certain models).

A recent test day off the Gold Coast saw a 5200 Sea Class centre console at our disposal. This particular rig is an AMM demo boat and it rocked up on a brand-spanking AMM Off Road trailer. The 5200’s matte black paint and the extra ride height of the Off Road trailer combined to give a ‘tough as nails’ impression, and I was itching to get on the water and put this weapon through its paces.

Unfortunately, the chosen test day was just beautiful, with nary a cloud in the sky, a very mild easterly swell and a 15-knot southwesterly wind blowing off the coast. Still, with an AMM 7000 Tournament also on hand, we had a decent wake to play with. Heading out through the Gold Coast Seaway, I followed the big 7000 and decided to drop straight in behind it, taking its wake almost dead on the side while travelling at about 45km/h.

For a 5.2m boat, the 5200 Sea Class sure knows how to handle itself. The sizeable wake was dealt with ably and without any drama, and once tucked in behind the big boat I applied more throttle to the Suzuki 140hp four-stroke to soon bring up 52km/h on the gigantic Furuno touchscreen. Once clear of the Seaway we pointed the bow south and I really laid into the throttle with the motor trimmed about two-thirds of the way up.

Pinning the throttle saw our speed rise to 63km/h but the nose was climbing a little too high for my liking, so I trimmed the motor down and found the ride to be more stable, with the speedo still ticking over nicely at about 61km/h. While not a traditional offshore rig, the 5200 Sea Class had no trouble handling the very mild conditions and it was just begging to punch into a metre of sloppy sea.

If there’s one thing open boats are good at, it’s getting their occupants wet, but that simply wasn’t the case in this Sea Class. Despite travelling at a variety of speeds with the wind blowing into the side of the boat, which normally sees spray peeling up and over the bow and sides, I was pleased to remain salt free. Another factor common in centre consoles in particular is a sharp or harsh ride due to their forward seating (or often standing) position and commonly lighter construction than similarly sized cabin boats.

Yet the 5200 Sea Class impressed with a forgiving ride, which is the result of several design features. First, the console is mounted almost in the centre of the boat, with the seat obviously ending up closer to the stern than the bow. In addition, the hull incorporates an aggressive 18 to 20-degree deadrise (depending on the Sea Class model) that easily carves through chop and boat wakes.

Finally, lightweight construction is far removed from the AMM design ethos, with all Sea Class boats comprising 4mm plate alloy construction and the test boat going one further and upgrading to 5mm bottom sheets. Barton from AMM pointed out that everything on an AMM boat can be customised to suit the customer’s desires.

Case in point, the test boat featured numerous options and custom touches that differed from the basic Sea Class layout. The centre console was extra wide at 900mm (available in 700-900mm widths), the massive storage area in the front cast deck had two access hatches rather than one, the port side of the boat housed a massive rod locker, and the list goes on.

The world really is your oyster when dealing with AMM. Due to the rear-biased driving position, you’ve got masses of fishing room at the bow. Two pedestal seats just in front of the console don’t impede on fishing space, though another mounting point on the raised casting deck gives you another seating option.

A super-deep anchor well has no issues swallowing a variety of anchors and hundreds of metres of rope as well as an anchor winch if you see fit. Positioned just beside the anchor well is the obligatory electric motor mount and on the test boat a Minn Kota electric. Also on the test boat was a deck wash that could be switched from salt to fresh water with a modicum of fuss.

A 40-litre freshwater tank can be refilled via the checker plate transom and another 40-litre tank is mounted in the bow to aid with weight distribution. Keeping your livies fresh isn’t an issue thanks to a generous plumbed live bait tank and stripping your baits is made easy by a large bait board mounted at just the right height.

The standard self-draining deck spills onto the full-width checker plate transom pod, to which access is gained via a rear door and boarding ladder.

One of the coolest features on the AMM 5200 Sea Class was a pair of LED headlights recess-mounted in the bow that provide up to 500m of usable light: perfect for night-time docking or spotting those hungry saltwater crocodiles in northern rivers and creeks.

That’s really where I can imagine this boat being most at home – in a Cape York creek on the hunt for barramundi and mangrove jack. The masses of fishing room and super-stable platform make the 5200 Sea Class centre console an ideal bay and creek fishing rig that is also perfectly happy to go offshore. And when paired with the new AMM Off Road trailer, this is a boat and trailer package that can go absolutely anywhere.

If you can see yourself in a boat that rules on the water and off the beaten track, call Australian Master Marine today on 07 3889 7380 or visit australianmastermarine.com.au

Daniel is BNB's subeditor and occasional fish-wrangler. If you've got a great story or at least an idea for one, flick Dan an email at editorial@bnbfishing.com.au
Previous Fishers fined $7000 for 798 red claw tails
Next Summer species fire at Bundaberg