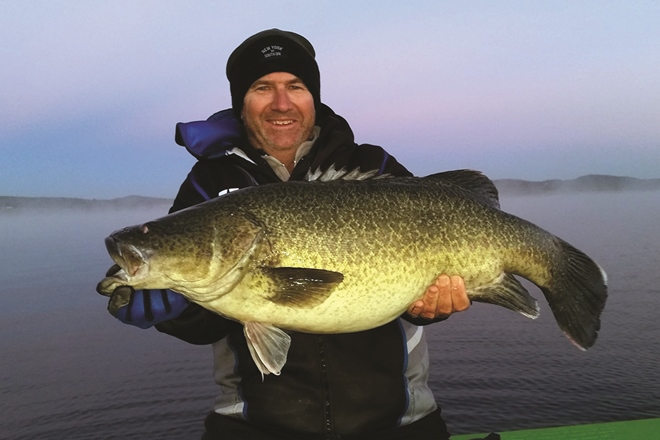 I USUALLY fish salt water but lately I’ve decided to see if I can catch some of the species that inhabit our freshwater dams, one of these being Murray cod.

Part of my inspiration came from Clint, one of the rod builders at Wilson Fishing, who recently went chasing Murray cod in a surface lure-only competition and said it was a lot of fun. Clint recently asked me to head to Copeton Dam in northern NSW with him and his son Tane, and seeing as the weather went a little pear-shaped for my usual charters that week, I accepted his invite and was not disappointed.

So where is Copeton Dam? Well you head to Inverell, and then about 40 minutes out of town you’ll come across a rather large dam that I never knew existed. It’s quite spectacular, with fantastic scenery and a well-stocked Murray cod population. The dam’s caravan park has a great kiosk where you can get all sorts of food and a good range of lures suitable for the area. Accommodation options include on-site cabins, caravan and camper trailer sites and basic campsites next to the water so you can park your boat right in front. You’ve got plenty of options, and considering Copeton Dam is quite big, if you’re there during non-peak times you could probably have a camping area all to yourself.

Now to the fishing. It was pretty simple – we were targeting Murray cod on lures. To tell you the truth, I had no idea what I was in for or what I was doing. Because Clint had been down there on a previous trip, he had a bit of a game plan, while Tane and I were happy to follow his lead. We had an advantage because we were surrounded by a lot of knowledge in the form of Stephen Booth from Wilson Fishing, who has caught plenty of Murray cod, and Josh Usher who is a Murray cod guru. It was great to be able to have a chat with these fellas and glean some knowledge and ideas on where and how to target them and with what sort of lures. They also helped with the techniques to use at certain parts of the day.

For example, of an early morning I was told to fish the shallows and use topwater lures, while in the middle of the day we headed out a bit deeper to find the bait and then in the late afternoon and night headed back to the shallows. With all the great advisors around, if I didn’t catch a Murray cod I would only have myself to blame. After a quick chat with the lads, it seemed the bite periods were very short. We saw a small bite period early in the morning from sun-up to roughly 8am and then another bite period late in the afternoon from 4.30pm until about 8.30pm.

So working with that time frame, we were going to get two early morning and two late afternoon/night bite periods before we had to head home from Copeton. We were also told catching them on surface lures would be quite difficult because most of the fish in preceding days had come on subsurface lures fished in the shallows of an early morning or late afternoon. The lures of choice were mumblers and chatterbaits. Believe me, the names of lures the freshwater guys are using are like a whole new language and I will need to learn it if I’m going to keep fishing the fresh.

Having sound knowledge of an area you’re going to fish is very important, so even if you don’t know anybody there, maybe slip into the local tackle shop, buy a few lures and ask for a bit of information.


This type of information can make the difference between catching and not catching fish. A very important bit of information Josh gave us was to ensure that in the peak bite time from 6.30-8am we were actually fishing, not driving around looking for where to fish. So armed with newfound knowledge and a Wilson Venom 6kg baitcaster rigged with a chatterbait loaned to me by Steve Booth, we headed out for our first session.

I don’t really know what the air temperature was but when we arrived at the water’s edge steam was coming off the water and I reckon it was around 3C. Clint, Tane and I jumped in our boat while Boothy and Josh took another boat and told us to follow them to a spot where they’d been getting a few cod. About halfway across the dam we ran into really thick fog and lost Boothy, which meant poor Clint had to pick his way slowly across the dam. Luckily it was only a patch and as the fog lifted we could make out the tree line and Boothy just ahead.

Upon arrival, we cast surface and subsurface lures at the tree line and underwater structure for a couple of hours with no luck. But with scenery as good as this and great mates on the boat, catching fish would only have been a bonus. After the early session was over, we headed back in for breakfast. Later that day, we headed back out onto the dam to capitalise on the evening peak bite period. We found great-looking areas with lots of bait but we fished right into the night with still no luck. So at about 8.30pm we admitted defeat and headed in for a hot dinner and warm shower.

After a quick chat with the boys over dinner it was decided we would use subsurface lures the next morning and try to roll them along as slowly as we could. The next morning we were up nice and early and out onto the fog-covered dam for another cool start. We found an area with plenty of bait and started casting at the shoreline. Tane and Clint started with surface lures while I stuck with a subsurface chatterbait.

I was trying to do what the boys said and roll it as slowly as possible without getting it stuck on the bottom, and instead of casting at the shoreline I cast along the drop-off in 2-3m of water. We worked the area pretty well, putting in plenty of casts as the sun came up. A fair bit of bait was sitting on the 3m drop-off, so I made a nice long cast and was concentrating on rolling the chatterbait as slowly as I could when all of a sudden, thump, I was on to my first-ever Murray cod. It pulled a bit of 30lb string to start with and then as it got closer to the boat it did some funny things including death rolls, going straight down and coming back up and rolling over the line.

It fought quite well. Eventually the fish sat quietly on the surface and Tane slipped my first cod into the net. We all gave a bit of a cheer and I must admit when you get up close to Murray cod they are spectacular-looking fish. I had only ever seen them on TV, so it was pretty cool to see one up close. It wasn’t a metre-long cod but I was pretty happy with the 74cm fish. It was a fat little fish too. After a few quick pics it was straight back over the side for a speedy release.

Believe me, when you turn up somewhere new and catch the fish you came to target, all those casts become worthwhile. Now it was time for Clint and Tane to get a couple. My fish was caught at 7.15am and the peak bite time was starting to sneak away from us. Tane said it was time to make a change, so he tied on a great big paddle tail soft plastic. He started casting it along the drop-off into the bait while Clint persevered with the surface lure because he really wanted to catch one using this technique.

The sun was up by this stage and after another 45 minutes of casting Tane and I were having a bit of a chat as he was slow rolling his paddle tail back to the boat. Right under the boat, crunch, Tane’s rod buckled over on his first-ever Murray cod. The fish gave a pretty good account of itself, taking some string and going straight back under the boat. Before we knew it, Tane had the fish under control and Clint had it in the net. A big cheer went up and Tane had a huge smile on his face. After a few pics, Tane’s fat 80cm cod was released to fight another day.

We fished on and I had one more hit and miss but at 9am we headed back for a big breakfast and got all our gear sorted for the next assault in the afternoon. For Tane and I, it really didn’t matter what happened after that because we had both landed fish, but Clint still had to get one, so we headed out with one priority: getting Clint a fish. We went back to the same area and proceeded to cast at the bank. I was still using my subsurface chatterbait and Clint surface lures. We worked that area until just before dark and I think I got another hit but other than that we didn’t see much action.

Clint finally admitted defeat and decided to take the surface lure off and give a subsurface chatterbait a go. He only made a few casts at the bank before he was on at last. It was a solid fish and Clint manoeuvred it through the light timber around the edge of the dam. Before we knew it, Tane had Clint’s very nice 78cm cod in the net. Yahoo, we all got one! That fish definitely brought a smile to Clint’s face.

Boy he put in a lot of casts but, like all of us, he said it was worth the effort. After a few more casts in the dark we decided to call it quits and head in. That was it for me because I had to head home early in the morning and back to Brisbane. As far as I’m concerned, the trip was a definite success. If I was going to give any advice to newcomers it would be to get as much information on the area as possible. I understand the habits of these fish change with the seasons, so there may be different peak bite times depending on when you’re fishing and where the bait is sitting.

I’m definitely no expert as I’ve only caught one cod but I was lucky enough to be fishing with two guys who had a lot of experience in catching these fish. I think if they hadn’t taken the time to give me advice on how to catch Murray cod, the outcome would’ve been completely different. In addition to local info, you will need a collection of subsurface lures such as chatterbaits and mumblers as well as trolling and surface lures.

A couple of other things before you hit the road to Copeton Dam: it’s roughly a 1000km return trip from southern Brisbane, so make sure your trailer is in good condition and your bearings are up to scratch. Also, make sure you know exactly what the safety equipment regulations are for your boat in NSW as they can vary between states. And if you want to get a cabin, make sure your book prior to heading to the dam. Finally, to all the guys present, thank you very much for making my first trip a success.