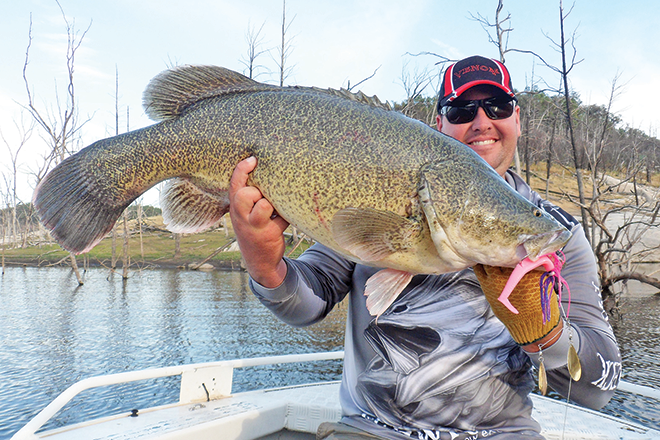 WINTER is here and Murray cod are well and truly on the chew. It’s been metreys all round on the impoundment scene as the Copeton Dam cod continue to show their green and gold colours.

Anglers are flocking from far and wide to chance their hand at that elusive metre-plus Murray cod. Some have caught their PB, others have cracked the metre for the first time and numerous lucky anglers have landed their first cod.

While for a long time it has held the title of Australia’s premier Murray cod impoundment, Copeton’s reputation has grown massively over the past two years as social media has been flooded with these big green machines. A recent trip to Copeton saw the Wilson Fishing crew hit the dam for five days.

The crew consisting of Stephen Booth (marketing manager), Scott Fleming (sales rep) and Shane Banks (sales rep) wasted no time getting into a few good fish and smashing some previous PBs to make it a very memorable trip. Boothy nabbed a 125cm horse off the top while Scotty boated a 117cm fish on a mumbler and a 120cm cod on surface.

A great effort for the team and especially Boothy who kicked a big goal by not only breaking that mighty metre mark, but smashing it by 25cm.
This was a great workout for the range of Venom rods by Wilson Fishing and they did it with ease. Plenty of other fish from 70-85cm were taken over the weekend, both on surface and by trolling big Bassman Spinnerbaits.

With the dam level dropping due to various water releases, it’s opened up a lot more fishable water with plenty of structure while shrinking the bays closer to the edge of the main basin, right where the big fish love to feed. We expect to see Copeton get better and better as the frosts get thicker and the high-pressure systems become plentiful.

As we mentioned last month, we will be detailing one feature of our new MotorGuide Xi5 trolling motor in every edition of BNB to let you know just how great these motors are.

The Jog feature on the Xi5 unit allows you to jog (move) up to 1.5m at a time while still under the Pinpoint GPS lock on the Anchor feature. It’s a very useful tool when you need to make those little adjustments to put you on the fish. It is as simple as using your steer buttons to jog you left and right and the increase/decrease speed buttons to jog you forwards and back.


You can jog as many times as you like until you have found that sweet spot. It’s perfect for sitting on top of a patch of fish or trying to line up the boat with pockets in the weed. Our MotorGuide electric trolling motors and all accessories are supplied through Whitsunday Outboard Centre, Cannonvale.

For all your MotorGuide needs, get in contact with Mark McNally today on 07 4946 7286. Be sure to check out some of Mark’s great deals on the Wells Brothers Fishing – Official and Whitsunday Outboard Centre Facebook pages. Mention us when ordering your Xi5 for the best deals in Australia.