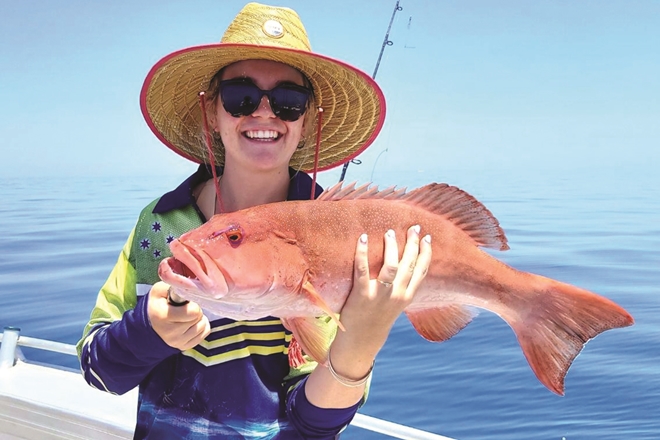 Emma showed the boys how it’s done with a nice coral trout.

Cracking close to the fishing year at Hinchinbrook

FIRST, a big g’day to everyone and I hope this finds you well.

Another fishing year is almost done and dusted. We’ve had better fishing as the year has come to an end, with good catches both inshore and offshore. It seems the heat has brought out the fish and the going is tough when you’re out on the water and the wind dies off to nothing. It sure gets hot!

I reckon we’ll be asking Santa for a new canopy for the boat because some shade would be greatly appreciated out there. Fingers crossed!

It’s been a roller coaster year and a big learning curve for us trying to find out just what makes this place tick and where the fish like to hang out through the different seasons. We think we’ve done OK considering the rain and wind thrown at us this year.  Hopefully it’s a more consistent year in 2020.

Let’s get into it with the inshore reports. Some XL grunter have been showing up of late and falling to half a pilchard or flesh bait presented on a 6/0 running sinker rig. The trick is leaving the bait out long enough so you wonder whether bait is still on it. A short wait is not uncommon before the rod loads up and you’re connected. Unfortunately, a number of the fish haven’t released very well, with some fish swimming off to the depths only to resurface a few minutes later, while others simply sat motionless on the surface.

Instead, they made an appearance on the table and were very nice chewing. Fingermark have been inconsistent inshore but they’re still turning up on the odd occasion. Mangrove jack have made their presence known and are biting well, hitting lures such as the Z-Man DieZel MinnowZ and Atomic 4” Prong Radioactive Rooster with gusto. Nice estuary cod are also falling for these lures, as well as strip baits and livies when offered.

We are hoping to try some night trips down the Hinchinbrook Channel when we have time, just to see what’s lurking, so we will let you know how that goes in future editions. All in all, inshore has been OK this year but hopefully we see a bit more action in the new one. Offshore has seen more consistent catches of coral trout and redthroat as we wind down, and the mackerel are going off as we speak.

Unfortunately, this seems to have brought in even more sharks, so it’s been a fight to get your catch past them. You can play a remora to the top for 10 minutes without so much as a sideways glance from the taxman, but hook a nice coral trout, nannygai or redthroat and you’ve got about 10 seconds to get them clear of the water.

Some nice longtail tuna are about, as are golden trevally, turrum and red emperor, all falling to baits and metal jigs. As mentioned, heavy gear and a quick retrieve will see you looking at a whole fish, usually.

The wind hasn’t been too bad of late. An hour of travel in a bit of chop will see you at the reef. Pillies, squid and strip baits have all been producing, along with metal jigs in the 60-80g range. Colour hasn’t seemed to matter much, but I prefer anything with orange or bronze through it. Fluorescent strips never go astray.

A big hello to Darren and Michael – it was great fishing with you crazy pair. We haven’t laughed so hard in a long time and look forward to your company again soon. We still have spaces left for both inshore and offshore charters, so feel free to give Judith a call with any inquiries about your next trip; she’ll look after you.

We hope you all have a cracker Christmas and great New Year. Take care and stay smiling. ‘Til next time, may the winds stay low and the fish count high.