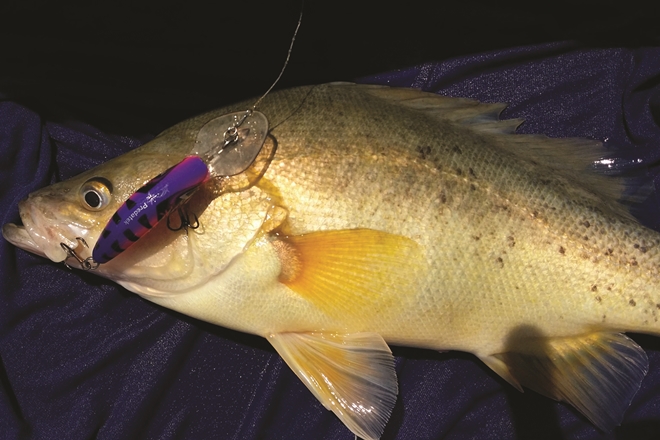 The first and smallest golden perch for the day was this handsomely coloured specimen.

An unusual day at the ‘office’

FOLLOWING several weeks of the air at home being thick with smoke from local fires around the compass, a day with clear air provided an unusual opportunity for a little R&R without stinging eyes and an asthma puffer.

By the light of the first sunrise in weeks not tinted red, I slipped the boat into my local stomping grounds of more than 30 years, Lake Wivenhoe. I elected to fish a little shallower than the depths at which bass schools had been holding during previous months, just to see what the day would bring. My fishing excursions long ago evolved from ‘bust a gut’ fishing hard for high numbers of fish into recreational, relaxing plunges into nature’s environs to recharge psychological batteries.

Pure enjoyment being the objective of the day, a casual dip into the tackle box saw a pair of B65D Boomerangs clipped onto trolling lines. One lure was in my eldest granddaughter’s favourite colour Purple Thing, which is actually mostly shocking pink. For contrast, the other colour choice was Mulga Frog, a subtle pattern in natural hues.

During the first hours of the morning under low light and on mirror-calm water, I was enthralled by close encounters with huge lungfish surfacing beside the boat, a plethora of waterbirds and even a platypus. My immersion into the natural world going about its morning rituals as the sun rose was disturbed every 20 minutes or so by a rod buckling to yield line to one of the lake’s less-popular species, blue catfish, usually on the frog-coloured lure.

Catfish are part of the ecosystem that has evolved in Wivenhoe, booming in number from the original sparse riverine population that existed before the construction of the dam. They can be eaten and are quite acceptably flavoured, though their flesh is much tougher than our scale-bearing native species (a characteristic that makes them ideal in a curry). I don’t take them for the table, but usually keep a couple of catfish to feed to a resident pair of white-bellied sea eagles, especially when they have chicks in the nest.

A few hours into the day, the sounder screen showed the arches of a school of fish holding in about 8m of water. The traces were so promising that I spun the boat around to take the lures back through the gathered fish. Several distinct hits were had without being converted, which had me guessing that perhaps I was bumping the lures into large bony bream.

Another 180-degree turn and on the third pass a hook-up was achieved, followed by resistance from a decent fish that had taken the pink Boomerang. Light line allowed enough pressure to be applied to turn the fish and as it emerged from the emerald depths, I couldn’t help uttering my surprise aloud. During half a lifetime of fishing stocked lakes in Queensland, this was only the second of this unusual species I’ve caught on a lure – it was a 40cm tilapia!

I’d lost contact with the school, so continued along the shoreline to a rocky section that looked promising. Anticipation was justified and the pink lure was once again hooked up to a hard-hitting, as-yet-unseen beasty. Surges could be felt through the line as powerful tail beats propelled the fish towards the lakebed against a firm drag. A smile broadened my old bewhiskered face as a colourful golden perch slid into the giant landing net that is always on board for cod and barramundi encounters.

One quick happy snap for posterity and the bewildered golden was soon paddling its way back to the depths of the lake. All the strikes were now coming on the pink lure, so I removed the frog pattern and replaced it with a purple Boomerang. Within minutes of commencing the trolling run, the new lure was taken by a fish that put up dogged resistance with none of the characteristic figure-eight manoeuvres of a catfish.

This fish too turned out to be a golden perch, though a bigger more stoutly built female without the bright colouration of the previous specimen. To ensure the fish was released in perfect health, I left it in the big net over the side and released it without lifting it from the water. Time ticked by while I alternated between staring at the sounder, birdwatching and winding in a fairly steady procession of fish, with catfish outnumbering goldens by about four to one.

Easily distracted by sightings of special avifauna including a black falcon, shoveler ducks, white-bellied eagles and so on saw me wandering off course into deep water occasionally. While accelerating to get back into the workable depth, I took a hit with lures running about 4m down in 20m of water. Long spirited runs at speed had me assuming I was connected to one of the large bass that call the lake home.