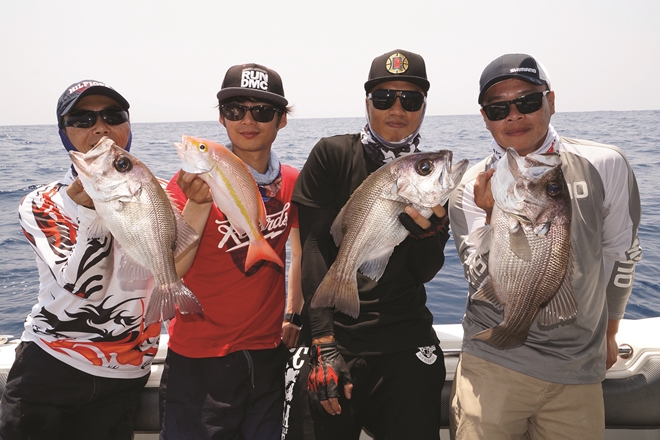 Four-way hook-ups are not uncommon on the 37s.

Guide to fishing the 37 fathoms and South Passage Bar update

WELL it’s that time of year again where it is the holiday edition and rather than reflect on the year that was, let’s be more proactive because a lot of frustrated fishers will be out there looking to wet a line after the big run of northerly wind we have had.

When looking to fish the bottom for reef fish at this time of year, one of the most overlooked locations is the 37-fathom line seaward of Moreton Island. Not frequently spoken about, it doesn’t tend to fire for much of the year, but is a personal favourite at the end of the season when the weather heats up and the fishing pressure on the reef reduces. It is home to a broad mix of species and certainly has its productive days if you are prepared to invest the time.

Many will ask where the 37s are. Well a good starting point is to keep an eagle eye out for an oval-shaped outline of reef line when heading northeast towards Square Patch after you have crossed the top end of the 35s and its associated back ledges.

That will put you somewhere around -27.15000; 153.36000. That reef line is quite extensive, running some kilometres to the north and south and flattens out more when you move along past the central high region. It is a good place to explore and floatline for a big late-season snapper around the steeper drop-offs. You can also live bait for kingfish and amberjack in the vicinity of the bait aggregations hanging around the random pinnacles you find by idling around, and it’s certainly home to cracking pearl perch and parrotfish as well as schools of hussar.

Teraglin are an option towards the northernmost sections and when you are landing blackspot pigfish and/or maori cod, you know that area hasn’t been fished much of late. To successfully fish the 37s at this time of year, you just need to hit it on a day when the current isn’t running too fast. If you think you can beat the current by anchoring and fishing heavy sinkers, it just isn’t worth the effort.

When the current makes a gurgling noise as it passes the transom after you have anchored, you will need a minimum of a kilogram of lead to stay somewhere near the fish and they are hard work winding in against all that current. On the light current days, you can either work long drifts or anchor on the better pieces of fish-holding structure. Moving away from the reef line east or west and working up and down while sounding at speed will yield a number of isolated pinnacles and drop-offs that can be accurately saved on a sounder/GPS combo as you travel, then come back and work them over to see what they are holding on the day.

This is not the reef system for full bag limit catches, but if you’d like the opportunity to find your own piece of reef that holds good-quality fish, then the 37s is a fun place. Sometimes early in the season the southern sections hold good schools of pearl perch and while not usually big fish, they are consistently there around April and May. The middle sections at that time of year often have big aggregations of baitfish and I can recall one particular occasion when it was a club fishing day and we hooked multiple small black marlin while floatlining for snapper under the baitfish.

The little blacks were on top of the bait hammering away and we cut them off because they were not a species for weigh-in back in those days. What I am saying is, expect the unexpected while working around locations like this.

Jigging can work very well on the 37s for amberjack, kings and pearl perch. I recently took a group of friends to the 37s on a very light wind/light current day and we had a ball just working our way around zig-zagging a 2km-plus stretch of reef. I have come to know these guys well over the years of working Reel Affair. On this trip, there were occasions where three and four of us were hooked up simultaneously, sometimes on jigs and sometimes with big baits.

The kings and amberjack liked the jigs and it was nice to see some kingies in the catch because they have really been hammered around Square Patch. It was fun until some sharks moved in and became costly enough with jig losses for us to want to move on and work baits and flutter jigs on flatter sections of the reef and the more isolated pinnacles. The flutter jigs that had a sprinkling of luminescence mixed in went well initially with that lift and drop action pearl perch seem to be a sucker for.

But as the wind started to come in from the north, making the drift faster, it was harder to get the jigs into the right zone for long enough. Then a couple of much bigger pearlies came up on baits, so of course everyone wanted to switch to baits. Funny thing, we got as many pearlies on one particular pinnacle that day as I have seen pulled off it in total over the past few years. The unpredictability and curiosity factor of that reef system draws me back there. Find the right day and have a good play.

At this time of year I usually provide a South Passage Bar update because a lot of people want to fish out of there during holiday season. At the time of writing, two fun little channels are quite usable on a small swell day to the north of Short Point on Moreton Island. They are useful if heading north for the day and are popular on the run-out tide because that long run up the ‘shingles’ inside the bar is smooth while the tide ebbs.

In the middle of the bar, the safest water when there is a swell to be respectful of is north of the big sand island, slap bang in the middle. Usually by this time of year the northerlies have built up loads of sand around it so it sticks out of the water as an obvious sand island at high tide. Not so this year.

The sand island is covered by a big expanse of shallow white water at high tide and quickly becomes obvious as the tide ebbs. Expect to see plenty of migratory birds resting there around the lower sections of the tide and you will need to hug it tightly as you work past it on the western side to find the deepest water and ditto as you reach its northwest corner and immediately start heading seaward. Stick to the deep water without straying too far northeast.

South of the sand island is the false middle channel. It starts off in very deep water and quickly funnels into shallower water, with big shallow banks immediately out the front where a charter boat rolled over a couple of years ago. A solid flick of the helm to starboard after passing the initial white water when outbound should get you into safer water, providing the swell is tiny, or during the top of the tide if there is a nice swell.

Not as safe an option as the area to the north of the sand island, it is favoured by the deeper-draft boats and trawlers because they are less likely to bottom out. The southern channel around from Amity Point is interesting. It is the shallowest channel on the bar, but the one most skippers tend to use due to its proximity to the fishing grounds, and it carries the greatest level of risk. Even on a small swell day you need to be careful navigating that region because of the shallow sandbanks.

I shudder when I see skippers heading straight out the front, not following the deeper water on a high tide of a morning and wonder if they actually know their way around and what they will be thinking if trying to head home across the same area at low tide. Do the homework and stick to the deeper water on this southern channel and remember at the lower end of the tide it can and will be very different to how it looks at high tide.

I did a recent day offshore in Reel Affair with its new owner showing him how to squeeze the most out of the sounders and other electronic systems as well as tune the boat for the best ride out of the old girl. It also allowed me to check out the bar for this South Passage Bar update. We went through the southern channel in about 15 knots of northerly wind on the top of the tide. It was pleasant heading out and plenty of shallow high spots with white water were visible.

When we came back later, the spring tide was ebbing strongly and despite less than a metre of northerly wind slop, the inside of the bar had deteriorated considerably and the width of the available channel had markedly decreased. A lot of sand has been deposited on the inside of the southern channel by the incessant northerlies. This is a normal part of the annual cycle around the bar, but be wary if you haven’t been through there for a while and extra wary if the swell is out of the east.

A log on with the volunteer groups prior to and after crossing would be very prudent, as would donning a lifejacket before making the crossing. We often get big swells around Christmas/New Year, so do some careful trip planning if heading offshore. On a brighter note, those big early season swells tend to gouge a lot of sand out of the inside sections of the bar and regularise the shape of the channels, so that will be a good thing after it happens.

Bill has been spearfishing, fishing and surfing for all his adult life and now runs a business specialising in teaching people how to cross coastal bars and fish offshore. He also runs charters for people who fish for the right reasons and whose company Bill thinks he will enjoy. He’s been running his bar crossing business successfully since 1996 and hopes to continue doing so for years to come as he grows old disgracefully.
Previous An unusual day at the ‘office’
Next Shimano launches the biggest catch yet