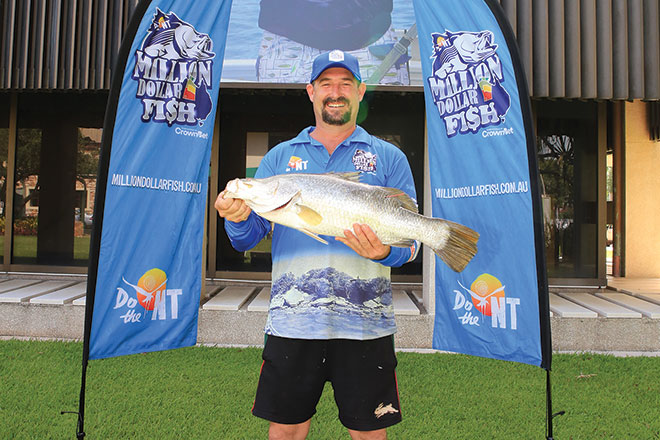 ANOTHER Northern Territorian is thousands of dollars richer after catching a tagged barramundi in the NT Government’s second season of the Million Dollar Fish competition.

The 72cm barra was hooked on the Daly River by Howard Springs man Craig ‘Curly’ Saxelby. Mr Saxelby used live bait to hook the winner, which was the eighth prize-tagged fish and the fifth from land-based fishing to be caught this season. Department of Tourism and Culture CEO Alastair Shields said, “A big congratulations to Craig on his prized catch – what a way to start the new year.”

“This win should encourage more anglers to have a go. “There are still several weeks left in this year’s competition and plenty of tagged fish waiting to be caught, including the million dollar barra. “Tagged fish were released across the Top End of the Northern Territory, from Arnhem Land to the Katherine region, Tiwi Islands, Kakadu and Darwin.”

The lucky fisherman said he and his mates Christian Ehling and Dazza Nelson made a pact on the way down to the Daly River. “We agreed if one of us caught a tagged fish the catcher would get $8000 and the two others a grand each,” Mr Saxelby said. “The boys were on one side of the river and I was on the other, then with a big boof the barra smashed out of the water and I yelled that I had got a red tag.

“We were high fiving, cuddling and kissing. “We couldn’t fish for the rest of the day, we were so excited. “The Daly River is really pumping at the moment.  “We were in the middle of the floodplain on the culvert near the river, with water as far as you can see, and just happened to be in the right place at the right time.”

The men said their prizemoney would go towards more fishing adventures. CrownBet Strategic Partnership manager Brad Fanning said, “It looks like the barra are back on the bite.” “CrownBet is extremely excited about Craig’s catch.
“Make sure you all get in and register and try your luck.

“There is still over $1.9 million worth of red tags swimming around the NT waterways and waiting to be caught.” In season two of Million Dollar Fish, 101 barramundi were tagged and released across the Territory, with 100 carrying $10,000 cash prize tags.

This recent win means 92 $10,000 barra are still lurking and the prized million dollar fish is yet to be caught. The Million Dollar Fish competition runs until February 28, 2017. Participants must register online at million dollarfish.com.au