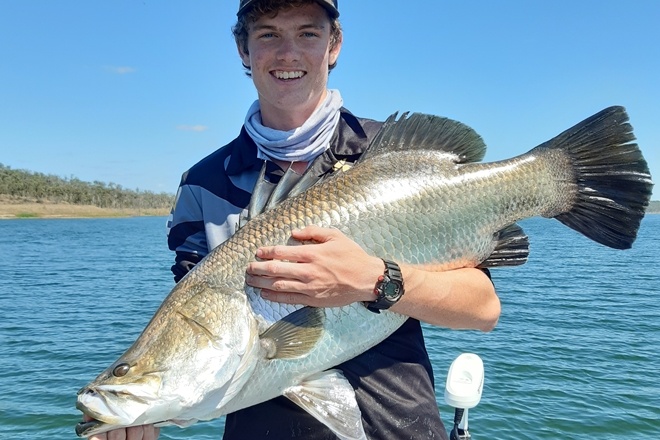 Matthew Smith with the 99cm barra he caught last week.

Early assaults will pay off

With the winds up this weekend around the Bundaberg area, getting out early to chase a few schoolie mackerel or even to troll for spanish mackerel, while searching for the schools of schoolies will be the best option to get a feed of fish. Have ready any type of Flasha lure or metal slug while trolling around.  Once the school is found, cast into them and let the lure sink for about 10 seconds.  Then use a fast retrieve and hang on.  Always remember, before heading out check the local weather forecast.

Before heading for a fish, put the crab pots out for a few hours as good reports of some muddies are coming in. With the warmer weather starting there is plenty of bait around which in turn, is bringing the predatory fish through the river system.

Flathead are starting to show up in bigger numbers. Casting a 3” to a 5” soft plastic drifting over the flats has been producing the goods. Flathead will take plenty of different baits like prawns, sprat, mullet strips or even pilchards to name a few.

Grunter will also take the same baits and lures if they are in the same area. This warmer weather has certainly got the mangrove jack stirred up. Casting surface lures early morning around rock bars and tight into mangroves has been the standout technique. Fishing in the same area, sprat, mullet strips or even big fresh prawns will get you a good feed.

These two rivers fish very similar to each other as the weather warms up, with plenty of mangrove jack caught around rock bars and in snags. Both rivers have been producing their fair share of grunter also. Using sprat, prawns and mullet strips will catch both species.

Good reports of whiting are also coming in.  Pumping yabbies on the low tide and fishing the incoming tides will produce a feed of the best eating fish in the sea.

Monduran is a place you will need to fish at the right time in the right area. As a lot of fishermen have found out, it is the dam of a thousand casts or what some would call Lake Misery.

A lot of local fishermen have worked out certain areas to fish on certain wind directions, moon phases or even tide times which can also be a bite period. Having this sort of knowledge can improve your fishing and catch rate from no fish in a session to maybe half a dozen. Knowledge can give you power!  There have been good reports of barramundi and plenty of them in the past week.  Casting soft plastics and Jackall squirrels has been catching the most fish.

This week, fishing has been a bit tougher. Like I said, it could be a moon phase or inconsistent wind direction, only the barra know.