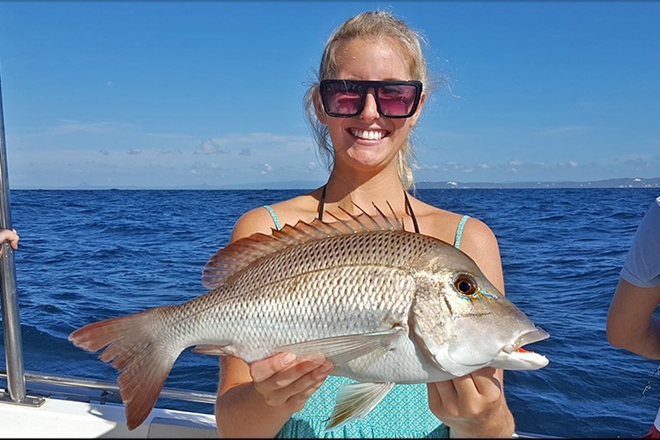 Shannon from Victoria pictured with a quality grass sweetlip which she boated there on Sunday's Wild Thing 2 charter. Photo: www.fishingnoosa.com.au

Easter weather perfect for a fish

What a wonderful weekend of Easter weather we had for the break, with families not only enjoying what the Easter bunny brought but some outstanding fishing as well. Flathead have been in great numbers throughout the lower reaches of the river, Zman Opening night and Motor Oil in 3 inch minnows have been working well. White bait have been deadly taking the majority of fish, make sure that you fish your whitebait on small gang hooks this will increase your hook up rate dramatically. There have been good reports of diamond, Kale Kale, big eye and Giant trevally on the high tides around the river mouth, Tewantin and the first Ski Run. These fish have been responding very well to surface lures like Strada Virals, Storm Chug Bugs and River2Sea Baby Bells. Fishing at dawn or dusk with a high tide you will give you greater chance of hooking up to a big one. Whiting have been in good numbers through the whole system with Weyba creek, the Frying Pan and the Bar area producing good numbers of fish. Worms have been the best bait but peeled prawns and live yabbies are claiming their fair share of the bounty. Mangrove Jack are still being caught in the system with the deeper holes and heavy structure accounted for most of the captures. However some outstanding fish have been caught up on the sand flats at night. Live baits are always the best bait for these cranky red critters. If you can’t get access to live bait fresh strip baits of mullet or bonito will have the jacks feeding.

On the Offshore scene: Sunshine reef has been fishing well for grass sweetlip, Venus tusk fish, squire and Coral trout. Some thumping great trout have been caught on live baits, with tusk fish and sweetlip being taken on pilchards and squid. Long tail tuna are still about in good numbers. The fish Inc. winglet and flanker stick baits are working well. There are still a few Mackerel hanging around they are taking large trolled baits like whole bonito and Mack tuna. Halco Laser Pros have been the stand out lure for catching these fish. North Reef has produced good catches of mori cod, tusk fish, sweetlip and a few nice size pearl perch out on the wider grounds. Blue marlin have been in great numbers off the shelf with some boats raising over ten fish in the day. These outstanding sports fish fight like no other with blistering runs that can see line disappear off reels at unimaginable rates. The full range of Entice lures are working well with bright colours like pink, green yellow and silver being most popular.

In the freshwater; Bass have been caught in good numbers below the Lake MacDonald spillway. Borumba Dam has had some good reports of saratoga in the upper sections of the Kingham and Yabba arms. Yellow belly have been caught in the deeper sections of Borumba. Try your hand at a few red claw before it cools down too much. You can catch these tasty crustaceans with a simple opera house trap.