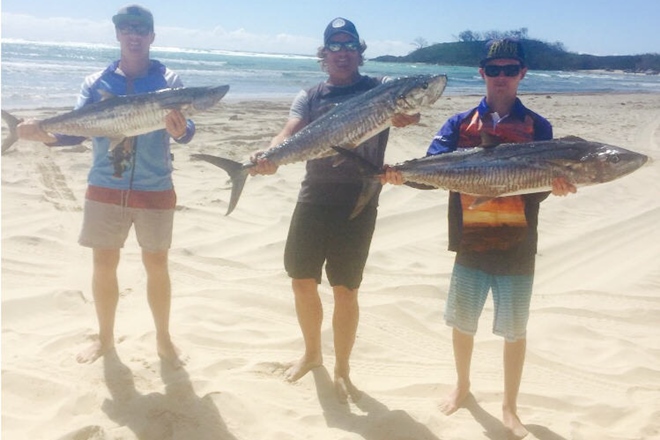 Mitch Beyer, Ben Grunske and Mitch Veurman with the solid spanish mackerel they caught over Easter.

I hope everyone enjoyed a little time off over the Easter break. By now, I’m guessing there aren’t too many Easter eggs left in the basket.

Once again, we were fortunate to receive some pretty good weather around the Bundaberg area over this period and by all reports, a lot of anglers made the most of the good conditions either enjoying fantastic fishing or crabbing.

The Burnett River is still feeling the effects of the fresh water inflow. The better fishing has been towards the mouth and I did see some fantastic summer whiting and some nice grunter being caught, mainly with fresh yabbies, prawns and mullet fillets doing the damage.

Miara Caravan Park is always an awesome place to set up camp over the Easter holidays. The guys who put in a little effort fishing managed to land some nice whiting, flathead, grunter, mangrove jack and the odd barramundi. It was also well worth setting a few crab pots as there were quite a few muddies caught over the school holidays.

Fraser Island was another popular destination for the Easter break. A group of keen young local Bundy lads had a fantastic time on the island. By all reports the spanish mackerel were in good numbers just off the coast and heaps of dart, whiting and bream were along the beaches.

With the first hint of cooler weather, the winter whiting are starting to be caught in better numbers around Hervey Bay, Woodgate, Coonarr and off the coast from Burnett heads. This should only improve over the next few months.

Lake Monduran Holiday Park was a hive of activity last weekend. The grounds are looking fantastic after the rain and all reports indicate the barra were on the chew in Lake Monduran. The water has levelled out and is just trickling over the spillway. April/May has always been a prime time to target Monduran’s barra as they feed up in the shallows before the cooler weather hits.