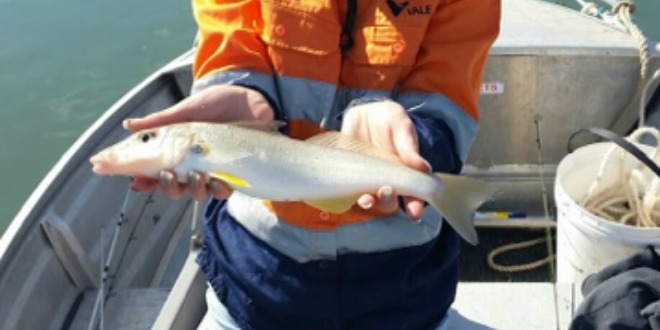 Alix Giles with a whiting that was caught in the Elliott River recently.

The offshore fishing around Bundaberg will be limited this weekend, due to the weather conditions and also the first of the Coral Reef Fin Fish closures, which will be in place from the 10th to the 14th of October.

Thankfully, the local estuary fishing has been fantastic lately.  The mouth of the Burnett River and around the leads have been producing plenty of pelagic action.  Good numbers of school mackerel, mac tuna and even a few queenfish have been caught during this past week.

The Burnett is alive with three-tooth jew, with some nice fish being caught between the Port and Rubyanna Creek.  There is no legal size or bag limit on these fish, but keep only what you need.

Another species being caught in the same area are some good quality northern whiting which are classed the same as summer whiting, with a minimum length of 23cm and a bag limit of 30.

Some other species that are really firing right throughout the river have been bream, flathead, snub-nosed perch, good grunter and a few mangrove jack round Toft Rocks and Splitters Creek.

A few local keen young anglers have been having a ball in both the Kolan and Elliott Rivers recently.


We’ve heard of quite a few nice barramundi caught in both systems last weekend on soft plastics and suspending hard body lures.  There was also reports of heaps of estuary cod and flathead, which were a welcome bycatch.

The Win Television Monduran Family Fishing Classic will be held on 17th and 18th of October this year.  This is always a fantastic competition with heaps of lucky draw prizes as well as prize money to be won.  Lake Monduran is just under 95% capacity at the moment, so there will be heaps of room for all competitors on the water all weekend.

Barramundi to 97cm have been caught this past week, with the Jackall Squirrel still being one of the most efficient lures.  Most of the Tackle World Bundaberg team will be attending the weekend, so feel free to grab any of us for any information, tips or tricks and let’s enjoy one of the best run freshwater fishing comps held in Queensland.