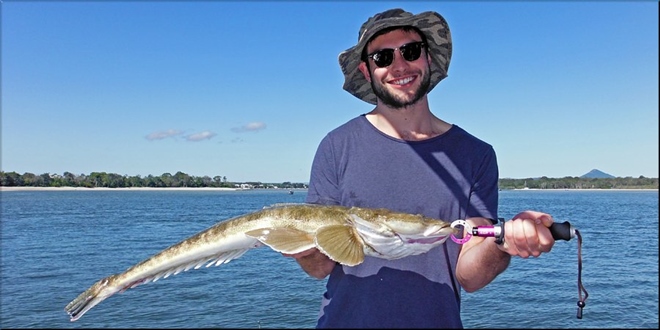 Scott Ennever from Sydney caught and released this 90cm+ flathead at the river mouth on a dead herring bait.

Spring has Sprung in Noosa

Quality numbers of whiting have been biting around the Noosa River mouth area for those using small surface lures like the Zipbait Skinny pops and Bassday Sugar Pens. Baits have also been proving success using live and cured worms, prawns, yabbies and pipis. We are still getting reports of flathead and bream being caught around the river mouth and Woods Bay drifting live baits like herring. The Fuze Prawn Head soft plastics have also been working well in the same area. The prawn head is very realistic and is designed with small thin curved leg that pulse with the slightest movement.

Trevally have been on the chew around the back of the sound and in both Woods Bays, trolled hardbodies like the new Zerek Tango Shads and the Jackson pintails have worked well the deeper stretches. Weyba Creek  has also been produced some lovely bream, whiting and flathead, again on small trolled hardbodies like the Strada Villians and baits like live worms and peeled prawns.

Fishing the Tewantin stretch of the river has also seen some good results, golden and giant trevally being caught during the day and jacks, tarpon and trevally during the low light hours. The ski run has been producing some good jew up to 80cm as well as some stonker flathead.

Offshore: with the winds still a little unpredictable the offshore scene has been hard to fish, but those that picked the good days were well rewarded. The close in reefs like sunshine have seen some quality trout, sweetlip and venus tusk fish while those that did head a little further afield where well rewarded; Double island produced moses perch, hussar, venus tusk fish, pearl perch, grass sweetlip, squire, coral bream, frying pan sized snapper and quality cobia, another crew headed towards the Hards and also scored some quality reefies including bigger snapper cobia, pearl perch and mowong. Reports from North Reef has included some big sweetlip and the odd jew fish. Tuna have also been on the radar for most reefs, pilchard floaters and slugs have been working well.

Up North we are starting to see the odd school mackerel this usually means that the spotted and the smaller spanish mackerel are not too far away, now is the time to stock up on those trolling lures, Davo’s are stocking the new Zerek Range of Bluewater Craft Limited trolling lures that look and swim sensationally, they come in a couple of sizes and a great range of colours and dive to 6m and can be trolled at up to 10 knots.