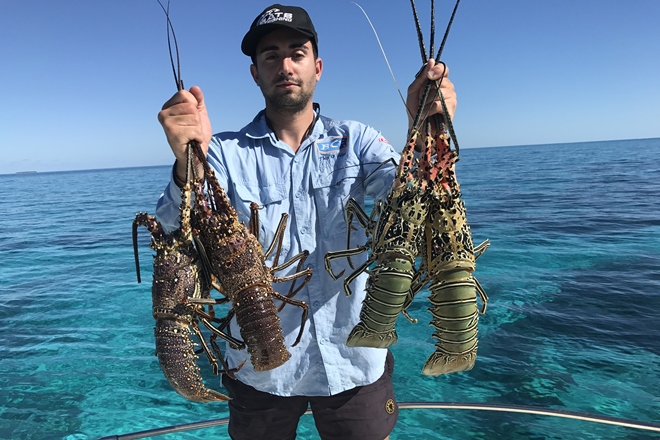 The author held a few crayfish that came out of the shallows of Broomfield Reef.

FOR most southern Queensland fishos, the Bunker Group is otherwise known as paradise.

It’s a place where the fishing is almost unbeatable, the water crystal clear and the scenery nothing but amazing. The Bunker Group is made up of a group of islands/reef systems at the southern end of the Great Barrier Reef. The Bunker Group name came about after being discovered in 1803 by captain Eber Bunker of the whaling ship Albion.

Planning a trip off the Group can be quite frustrating in terms of knowing what to take, who to take and when to go fishing.  One of the most important things to consider before heading out is feeling confident in your vessel. Although you can hope the weather is perfect, the fish are biting and the boat is running perfectly, you need to prepare for the worst-case scenario.

For us, most cases fishing off the Bunker Group result in an overnight stay on the reef because we are based on Brisbane’s southside. Our trips consist of six and a half hours of driving to 1770 by car, then roughly one and a half hours of driving in the boat out to the reef, depending on the weather. It is important before fishing the Bunker Group that you have familiarised yourself with the marine national park zoning maps, which can be found at gbrmpa.gov.au/zoning-permits-and-plans/zoning/zoning-maps

Ensuring all your safety equipment is up to date is another vital aspect of planning any trip, and choosing the right crew can be just as important. Fishing healthy reef systems can sometimes be a problem if you’re only wishing to target certain species. We sometimes dedicate whole trips to chasing red emperor and will pack the boat accordingly. Many people get caught up and fill the boat with trolling gear, bottom gear, diving gear, topwater gear and so on.

In most cases, not everyone has a big enough boat to pack so much gear and it can become quite unsafe if the boat becomes overloaded. We try to pack no more than two rods per person and the tackle required for the species we are targeting. Most anglers have a preferred reef/island to fish off the Bunker Group, and for us it has to be Sykes Reef. Sykes is located 80km northeast of 1770 and is home to a large number of reef species. Whether it be big red emperor on the deeper edges of the reef system or trout in the shallows, this is a place we call paradise and covers almost anything an offshore angler could ask for.

A lot of people head out to the reefs with a couple of GPS co-ordinates their mates have given them, thinking that’s all they need to catch fish. Like everyone, we start somewhere. Whether it be a mark someone has given us or a contour line on the GPS that shows good ground, it is important to run quality marine electronics. We recently had a Furuno upgrade in our boat and could not be happier. From sounder readings to understanding how the units operate, the Furuno gear has certainly played a big role in our fishing and has made isolating little rocks for red emperor even easier.

If your sounder is not showing accurate readings while travelling or even at rest, it’s going to make your life a lot harder. In many cases we find the fish feeding away from structure. As a matter of fact, all our larger reds have come a fair way off our GPS marks. It’s not about finding the rock/ledge and turning the motor off right above it. Yes, that works at times, but nine out of 10 times the larger trophy fish will be lingering around the outskirts of the structure, and having the right sounder setup to find these larger fish is hugely beneficial.

Another amazing form of fishing on offer around the Bunker Group is spearfishing. The clear water makes for phenomenal visibility. Although I am no expert diver, I dive with someone who is and who has a great understanding of the ocean. Diving around the shallow edges can lead to rewarding catches and benefits when the fish have gone off the bite. Experiencing the feeling of being in the water with the fish teaches you to respect the fishery that little bit more.


It is important to remember when entering the water that you are entering the fish’s world. You are the unexpected guest, not them. A lot of people fear what can be found in our Queensland waters and it is only normal in the beginning, especially being a fisher and knowing that about 20 percent of fish caught in the shallows get sharked. If you chose to dive off the Bunker Group, I strongly advise diving with a buddy.

Everyone has their favourite form of fishing and no one is right and no one wrong. At the end of the day, if what you’re doing is working and you’re following the law safely, that’s all that matters. We are so fortunate to have such a beautiful place on offer in the state we live in and it’s up to us as anglers to ensure this fishery remains sustainable for our children and grandchildren in the years to come.