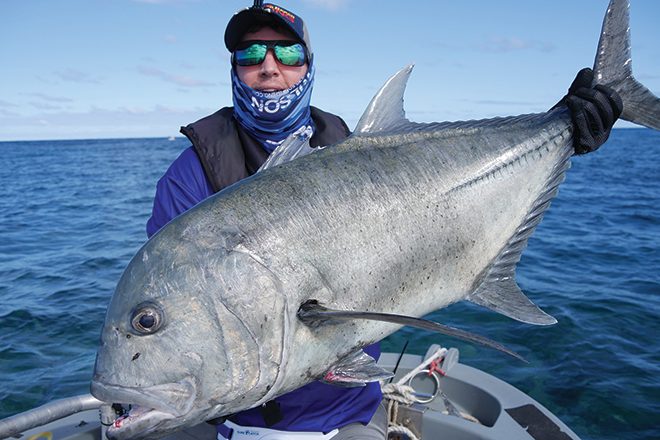 The author landed a GT on a Zerek Zappelin lure and a Venom GT PE8 rod.

A FISHING trip to Swain Reefs had been on my bucket list for many years and was continually reinforced each time I read a BNB scribe’s epic trip report.

As mentioned in last month’s editorial, I got the call up to accompany a select crew put together by Wilson Fishing including Troy (Dicko) Dixon, Clint Fannin, a number of tackle shop owners and managers including Tim, Jay, Dave, Shaun, Danny, Liquor Legend himself John (JC) Carmody and Angove Wines man Shaun, as well as YouTube sensation Sammy Hitzke (he’ll love that).

In addition, Mark Berg, his guest (who I won’t reveal because the show is still to be aired) and two camera crew (Lofty and Will) rounded out the motley bunch who would spend the next 10 days aboard Big Cat Reality Charters.

To keep us in line and put us onto the fish was skipper James ‘Jimmy’ McVeigh who has a wealth of knowledge and has spent years on the water. His awesome crew consisted of Paul, Gary, Aaron and Jeff the chef, who my wife was not very happy with upon my return as I had gained about 4kg through good living and copious amounts of food.

In the weeks and days leading up to the trip, I had a spring in my step and kept in close contact with Dicko to make sure everything was good to go. One of the pictures Dicko sent me the night before we were scheduled to depart was the fully loaded Wilson Fishing van packed to the brim with gear.

Despite having seen the pic, I was still overwhelmed by how much fishing tackle had actually been brought aboard Big Cat and littered the top deck and bottom rigging table. We boarded the Big Cat and as Dicko and skipper James chatted, throwing ideas around about where we should go on this exploratory trip, the team started to get to know each other while rigging rods, reels and lures for the battles that would begin the following morning when we reached our first fishing destination.

I was like a kid in a lolly shop. When it comes to being on the water, I absolutely love it and ‘touch wood’, have never been seasick, though I did pack a couple of packets of Kwells for this adventure, just in case.
While everyone got their sea legs, there was an aura of excitement as we motored through the night and anticipation became reality.

Dicko partnered me with Sean, also known as ‘Tiny’ or ‘Trots’ in Grey Ghost, which was a 4.3m Smartwave fitted with a 50hp Mercury four-stroke outboard and decked out to tackle a mix of fishing styles. While this boat wasn’t overly big, it was basically our daytime home on the water for the next eight days.

Thankfully the weather gods were smiling on us as the only bit of wind forecast was for the initial run up and then on the last day or so on the way back. You could not have scripted better weather, which made this adventure even more unreal.

In each boat were eight or nine rod holders, which allowed each angler four rods. Despite having more rods to choose from than most tackle shops, I managed to whittle down my selection to the allowed number. My weapons of choice consisted of a Venom Popper 7’11” PE8 matched with a Shimano Stella 10000 (which was replaced with an ATC 10000 after a few days, but I’ll talk about that a little later); a Venom 7’ Spin 15-50lb rod and ATC 8000 reel; Venom Overhead 7’ 20-50lb and Talica reel; and a Wilson Live Fibre Overhead 7’ 15-24kg paired with a Tyrnos 20.

As for line, all reels were spooled with SureCatch Energy Braid, with the Stella and ATC 10000s carrying 80lb and the other three 50lb. Some may think 80lb too light, especially when chasing big GTs, but this braid seemed a lot stronger than the label indicated, and some horse fish were pulled out of precarious spots. That said, not all fish hooked were boated!

As you’d expect, the Venom PE8 was used to chase GTs and for this trip that predominantly involved casting stickbaits. Sitting in the middle of the Venom range, I found this rod pretty versatile and easy to use. Now when I say easy to use, I don’t mean you don’t have to do any work to pull these monsters to the boat, you sure do, but its light weight for casting and slower taper for fighting a fish made it that much easier.

The PE8 has a recommended cast weight of 85-175g, though I think it would easily handle up to 200g, so you are in no way under-gunned when it comes to cast weight. However, the beauty of this rod is it’s a little more user-friendly than the PE10 and the big boy of the range the PE12.

Obviously, it depends where you are fishing and what you are fishing for, but I felt the PE8 more than did the job it was asked to do. And this job consisted of taking on brute GTs making violent runs back to the reef with a locked drag as the boat reversed away from the edge of the bommies trying to pull the fish into deeper water.

I also feel the 7’11” length is just about right because you have plenty of length for long casts and enough rod to fight these fish around the boat. The Venom and Live Fibre overhead rods, both 7’, were used for trolling and also doubled as bait fishing rods with the old paternoster rig.

I actually own a Venom overhead, so it performed how I thought it would. However, I was interested to see how the new Live Fibre would go because it is a new and improved design with better construction. Yes, Live Fibres are now made overseas, but so is basically any other rod you buy.

The advantage is you now have a higher-spec rod that costs less. If you are in market for an affordable offshore rod, make sure you check these out at your local tackle shop because I think you will be impressed. I have a couple of the old red ones but will be adding some new ones to my offshore fishing stable.

While the make-up of the new Live Fibre was a little different to the old one, it was very comfortable to use, even when hooked up to large sharks. It also landed a number of trout and other reef species, but the sharks and a chinaman fish gave it the best test.

My final choice was the Venom 7’ Spin in 15-50lb. I admit when I first picked it up I had to double check the line class because I thought I had misread it, but no, that is correct. This rod was matched with an ATC reel and made for an awesome light setup to use for a mix of throwing surface lures and jigging plastics off the bottom.

When I say light, I am referring to the tip, because it was soft enough to cast lightly weighted lures and plastics. However, when push came to shove, it was impressive how much hurt you could put on a fish, ensuring it did not get back to the reef.

I guess that is where the 50lb line rating comes in, because you could really load this road up. Overall, this is a beast of a spin rod and is also on my ‘to-buy’ list.

The adventure to the Swain Reefs continues next month with a run-down on the pick of the lures, other gear used, fishing techniques, Big Cat Reality Charters and a bit of Karma, so stay tuned.
For more information on all the Wilson Fishing gear, head to wilsonfishing.com