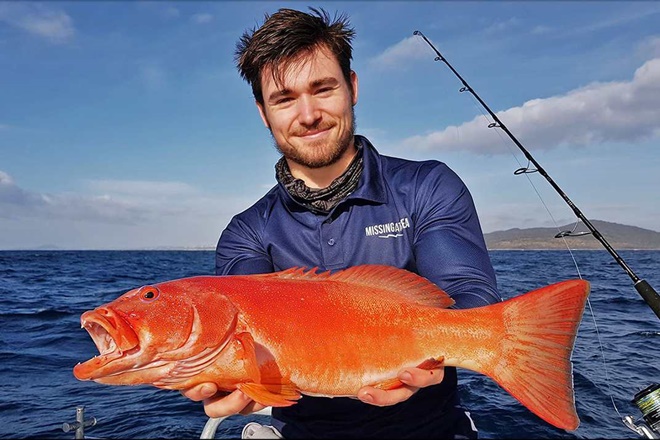 Ben Newland went out for an early snapper bite on Friday morning but to no avail. He then decided to jig up some livies in hopes for a winter trout and first drop managed this nice fella. Photo: fishingnoosa.com.au

Fishing far and wide off Noosa only getting better

Well that was July and what a turn in the weather we have had. Finally the winter weather gods smiled and gave us light winds, low swell and mid 20 degree temps to help forget the cold mornings. Pretty much anyone with a rod managed to get out there and enjoy what is on offer.

The fishing far and wide is only getting better with Double Island providing anglers with scarlet sea perch, big reds in the form of emperor and snapper as well as amberjack, sweetlip, various cod and cobia. The Barwon Banks has produced some solid snapper along with cobia and pearl perch. Reports of anglers getting blown away are becoming more popular so PE3 gear is a great starting point especially when jigging. This is the land of big AJ’s so you may get dusted no matter how heavy you go so hold on.

In closer North reef has become popular with anglers wanting to chase snapper, pearl perch, tusk fish, cobia and even longtail tuna but not in big numbers. Jewfish have also come from this area so big slab baits or deep dropped live baits work well here. Slow jigging is another great method to target a jewie with the turn in the tide a better time to hook up. Take a look at the new range of jigs from the guys at CAST as there are slow and fast options available in a multitude of weights.

Sunshine reef proves ever popular for smaller craft and those chasing a feed of smaller snapper, pearlies and sweetlip. This area always provides anglers the option to fish multiple styles and catch a variety of fish. Soft plastic fishing works very well here and with the lead up to the new moon we should start to see the early morning bite pick up. If you are looking to try soft plastics then a lighter 4-7kg spin rod with 20lb braid and 20lb leader is enough to get you going. Be sure to pick up a few styles of plastics in the 3-5 inch range along with some scent and jig heads from 1/4oz to 3/8th oz. With the lack of rain the inshore fishing is best approached with lighter gear as water clarity only increases. Lastly don’t forget to drop off any spanner crab dillies as it is the time of year for them and good catches have been reported along the coast.

The local surf fishing has seen the tailor start to show up with smaller fish reported along the coast. After the rainbow beach classic is usually an indicator for the tailor to show up so get lines out over the next few evenings. Jewfish will also be running and following the tailor so bigger gang hook slab baits, strip baits and even live baits will be the go as we near the new moon. For those fishing light take some beach worm and fish the inshore gutters for bream, dart and whiting.

The Noosa River has seen good shows of trevally, flathead and smaller jewies throughout the system. The lack of rainfall has seen the river clear up so fishing lighter than usual will see you get the bite. For the lure anglers, dropping down to 6lb and 4lb fluorocarbon leaders will tempt the bigger line shy trevally and bream. This is the time of year where slow rolling soft plastics with slightly heavier jigheads will entice a bite from a big flathead. This kicks up the bottom and creates interest. Having scent really helps with slower retrieves as fish will follow the lure and pick up on the scent trail. Fishing around the mouth of Lake Cooroibah, on the opposite side of Gympie Terrace toward the frying pan and the current line are some prime spots.  Trevally and tailor will be schooling up around woods bay and are hitting surface lures at the end of the day with Woods Bay a popular spot. Ecogear PX45 and Zip”n”Ziggy are two great options. You can take these lures anywhere and catch great fish.

The freshwater has seen the temperature stabilise so the bass and toga are still feeding. The lead up to the new moon should see a strong bite especially with the light winds and lack of rainfall. Take a look at Rapala Swimming mullet and Westin Swim for two great subsurface slow retrieve baitfish profile lures. Working the weed edges while the sun is overhead will get the fish during the hottest part of the day and toward the end of the day is a great options for lure anglers. Spinnerbaits have been successful when all else fails. Take a look at the new hot bite midget assist lures with a twin assist off the back for securing reaction bites from fish. Don’t forget to purchase your SIPS permit for fishing Lake MacDonald and Borumba which can be done online in a matter of minutes.