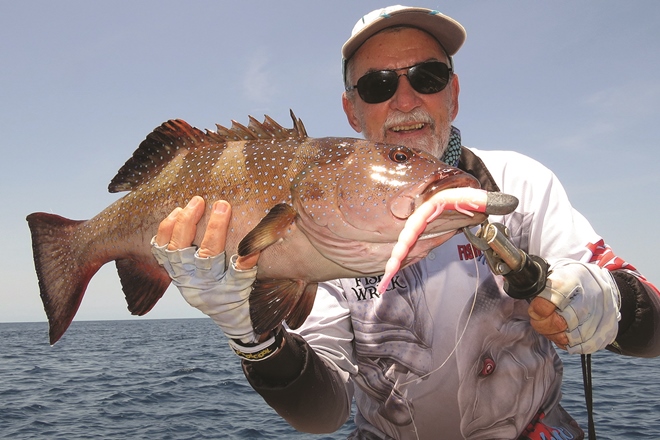 The author with a typical east coast coral trout. This one was taken on a Halco Madeyes Paddle Prawn, a personal favourite for this style of fishing.

I BET a host of Queenslanders don’t realise our state actually has a west coast – and it stretches along a coastline equivalent to the distance from the Gold Coast to the Whitsundays!

That coastline has only three towns along its length – Karumba, Weipa and the five communities that make up the Northern Peninsula Area, as well as three indigenous settlements at Kowanyama, Pormpuraaw and Aurukun – all up housing fewer voters than the average Brisvegas suburb. That’s probably the reason why permanent residents up this way often have the feeling they’ve been largely forgotten on the political front!

But there’s a similar stretch on Cape York’s east coast that is even less populated. North of Cooktown (and Hopevale) an almost equivalent length of coastline to the Gulf of Carpentaria side contains only a single small indigenous community: Lockhart River. The airstrip here was once part of a large military base during World War II where US and Australian bombers flew hundreds of missions to New Guinea and the Pacific Islands, their actions contributing considerably to the turning back of Japanese forces at that critical stage of the fighting.

That original airbase was established using an existing jetty at nearby Portland Roads via a road through what is now the rainforest of the Iron Range National Park. These port facilities were established in the early part of the 20th century to serve the productive Wenlock Goldfield, whose shafts were flooded during the hiatus that occurred during the War and were subsequently abandoned.

Unfortunately, the remains of that jetty were demolished in the 1990s. These days, a small settlement at Portland Roads sits on the only freehold land along the entire Cape York east coast. It’s a steep, well protected little bay that overlooks the waters of the Coral Sea and the Great Dividing Range to the north. A couple of accommodation venues are available here but they are almost always heavily booked.

A short distance south, limited camping sites are offered within the national park at nearby Chilli Beach. Chilli is a popular destination with Cape travellers during the tourist season but its beachfront is wide open to the trade winds that blow during the dry season. You’ve probably heard about wind strong enough to ‘blow a dog off its chain’. Well, that describes conditions at Chilli perfectly for most of the months between June and October each year. It’s the foulest of fishing conditions you can possibly experience. Luckily, some very well-protected camping sites lie among the coconut trees and rainforest.

All that changes when the visitors have disappeared south and the build-up to the wet season arrives. Known as the ‘doldrums’, the wind drops, the sea glasses out and the water clears – perfect fishing conditions. But there’s a downside! The humidity goes through the roof, making it very bloody hot and oppressive, a sure sign the storms that herald the wet are not too far away. Of course, if the storms get too heavy or the wet sets in, road travel can be very, very treacherous indeed.

However, the physical discomfort and need to drive for four to five hours over mostly unsealed roads is, for many of Weipa’s keen fishers, a small price to pay for the opportunity to fish the almost pristine waters of the nearby Great Barrier Reef.  The Chilli Beach campsites tend to become a ‘little Weipa’ enclave on Cape York’s east coast during November, chock full of dusty tinnies and four-wheel-drives as soon as the forecast mentions ‘light winds’.

On a good day, in the average 4-5m craft, the outer edge of the Great Barrier Reef is just over an hour from the Portland Roads boat ramp. The ramp is a fairly rudimentary affair, accessible only from half tide up. Some campers opt to launch their vessel and bring it around to Chilli Beach where it can be moored overnight as long as the weather holds. The state of the tide here must also be taken into consideration because wading or swimming can offer exposure to box jellyfish and crocodiles, both hazards the Weipa locals consider an acceptable part of their outback lifestyle.

I’ve managed to line up two trips to the ‘east coast’ in the past couple of years and they’ve been memorable experiences. Quite a few years back, I decided to exclude bait from all my reef fishing ventures, preferring to use soft plastics and various jigs instead. That approach might not get the number of bites good bait generally produces but when a fish does come along, it’s commonly of decent size.

Fishing soft plastics requires a change in mindset to get good results. If you remember that the lure generally has an action even with the slightest rod movement or current flow, then factor that into your fishing technique and the results will flow. Most softies require nothing more than a slow lift of the rod tip or a slight jiggling action to make them appealing to a predator. They do not need to be jerked madly or quickly like a metal lure.

If you’re drifting under the influence of a light wind or current, then the typical soft plastic will be moving enough to get a bite, even when holding the rod stationary. I’ve hooked quite a few inquirers with the rod in a holder while helping a hooked-up companion land a fish. Treat a soft plastic ‘almost like a bait’ and the results will come. When a touch is felt, resist the urge to strike straight away.

Instead, drop the rod tip slowly towards the fish and wait for weight to come on the line – that usually only takes a couple of seconds, at most. When that weight is felt, lift the rod firmly to set the hook and be ready for the surge that follows. Those first 20 seconds of a fight are really critical if it’s a decent fish and you must use maximum pressure to steer it away from the reef. Bites don’t happen like that all the time, sometimes the rod just smashes down and you’re on.

As far as hardware is concerned, jig heads from 1-2oz fitted with heavy hooks will generally handle the necessary water depth and current where fish are located. Soft plastics such as the Halco Madeyes Paddle Prawns in 5” and 7” and Berkley Gulp Jerk Shads and Nemesis in similar sizes are a couple of favourites. My favourite reef outfit consists of a Banax Kingpin 5000 reel loaded with 50lb Platypus braid mounted on an LJ Custom Xyoga short-stroker jig rod. Leader is 80lb Platypus Hard Alloy mono.

The majority of the Barrier reefs open to fishing have been worked over by the live trout boats, including those off Portland Roads. However, these commercial fishers are only interested in smaller just-legal coral trout for live fish exports, not the larger models that generally live in deeper water. This means 4-5kg coral trout of several varieties are still very abundant along the wider reefs in this area.

Along with the trout, you can encounter plenty of the other reef regulars off Cape York’s east coast including sweetlip, tuskfish, cod, red bass, jobfish and trevally as well as nannygai and red emperor in the really deep stuff. Mackerel and barracuda also haunt the reef edges, while yellowfin tuna, wahoo and dogtooth tuna can be found a little wider. The water clarity over the shallow reefs is generally exceptional, so it’s difficult not to want to get in the water and have a look around via mask, snorkel and flippers.

Many boats carry spear guns in the hope of coming face to face with a big trout or similar. It’s important to wear a stingersuit or wetsuit before jumping over the side because medical help is a long way away if an Irukandji spoils the party. The east coast reefs off Lockhart River are a long way from anywhere but they are definitely worth the trip when the weather comes good.

It’s a tiny haven in a very remote coastline that few get to experience – and long may it remain that way on the Cape York east coast!

To read about more of this area’s great fishing options, click here!