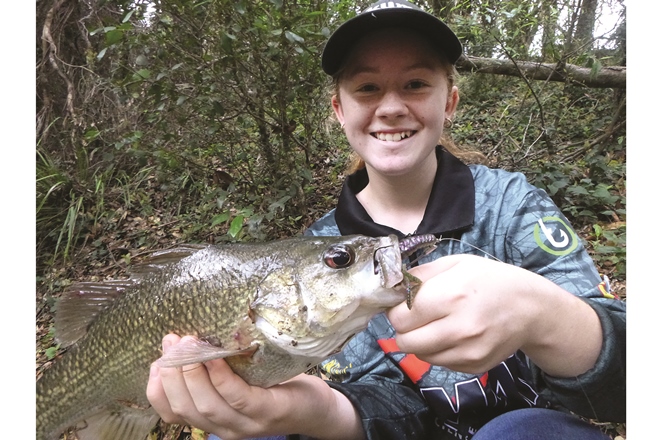 Kailtin’s first bass is going to be hard to beat.

Bass fishing for the first time in years

AFTER some thought, I had two opportunities to fish over a long weekend: early Saturday morning while on the way to see my family and again on Monday morning for a sneaky bay session.

Because different family members live all the way along between Gympie and Tin Can Bay, I had plenty of options as to where I could wet a line. A number of years back I lived in Gympie and while there was introduced to the wonderful world of bass fishing. In particular, chasing them on the surface.

Back then, my first-ever bass fishing trip consisted of us walking down a goat track in the middle of the night to the river’s edge. In complete darkness we started throwing poppers and surface crawlers. Being an avid saltwater angler, I have to be honest, I was sceptical.

That was until I heard my mate’s lure get inhaled at his feet, which resulted in a mid-40cm bass being landed. This was the turning point for me and over the next few years I made it a mission to chase big bass off the surface.

Fast forward a good 10-plus years and I’ve only fished the Mary River once since moving away. Now I had an opportunity over the long weekend, I was keen to hit some old spots and do some bass fishing. Kaitlin, my middle daughter, is a mad-keen fisho and over the years has developed a passion for fishing, particularly notching up new species. This would double as Kaitlin’s first session targeting bass.

The mighty Mary River is a huge expanse of water with dozens of access points. Google Maps, along with a little research, will go a long way if you’re keen to tangle with some hard-fighting bass in this system. We chose a little tributary running off the main body of the river, which in years gone by has produced quality bass fishing.

It is a relatively small stretch of water loaded with structure and deeper holes. Accessing some of the areas can be a little tricky and even when at the water’s edge, finding a good spot to cast from can be difficult. Arriving at the creek’s edge just as the pre-dawn glow burst through the trees, we started working our first area. We chose to buzz Z-Man FrogZ and poppers across the surface.

The humidity was oppressive, and with a few bugs around, along with an occasional boof, I was convinced we’d get a strike. But as is the case with fishing trips, sometimes things just don’t fire. For nearly an hour we worked hard to get one strike each and watched one fish follow the lure to our feet. So frustrating.

As some of you are aware, around Australia Day southeast Queensland got a lot of rain and it was good to see the Mary starting to get some flow back. This had me thinking that even though the outside air temperature was good for surface lures, maybe the water temp and flow was shutting the bass fishing down.

At this point, Kaitlin and I opted to switch to lightly weighted, weedless-rigged Z-Man 4” Turbo CrawZ and 2.75” TRD BugZ. Once rigged, the plan was to flick these presentations hard into the snags and let them sink slowly with an occasional shake and hop. We moved on to more untouched water which was a little more difficult to access.

Sliding down embankments and getting covered in mud added to the adventure and soon Kaitlin perched herself on the only bit of flat ground and started working the three awesome-looking snags in front of her. I was hoping this next section would produce fish because the snags were sitting in deeper water and covered by a lot of overhanging trees.

I landed my first cast into the snag only to hear Kaitlin’s drag screaming. She was locked onto a solid fish and it wasn’t going to come quietly. It tore into all three snags trying to bust her off, but with really good line management and rod handling skills, she managed to lead her first-ever bass into the net. It measured in at 47cm.

It’s going to take a long time to wipe the smile off her face (as soon as we got home it was quickly added to her brag mat, where her records are kept). As with all ‘first fish of the trip’ moments, the monkey was off our backs and it was time for me to get onto one. We pushed a little further down into more snags and my first cast got me a rattle, then on my second the BugZ was smashed.

Once again the creek was filled with the sound of a screaming drag. I love bass fishing in tight, hard-fought country because they soon let you know if your skills are a little rusty… and to be honest, mine were. The fish had me bricked straight up, however after backing off the tension for a minute it swam back out from the snag and boom, the fight was on again.

This time I was able to keep it from getting back into the remaining snags and landed a slightly smaller fish than Kaitlin’s, probably about 42cm in length.

For the remaining hour of fishing we pushed into other areas of the creek, casting tight into structure and were rewarded with quite a few awesome strikes but weren’t able to convert because they had the snag advantage.

Apart from the fishing, which was awesome, we also spotted a platypus up close, just chilling on the surface as we were casting around. We agreed that along with the fishing, this was a highlight and not something you see every day.

If you haven’t had the opportunity to chase bass in tough, hard-fought country before, it’s definitely something you need to try. There is something very rewarding about standing in precarious areas on the edge of a river and attempting to get the perfect cast that results in a quality bass.

A couple of things to take with you on this sort of trip include good-quality footwear, long pants and a long-sleeve shirt because there is a very real chance you’re going to encounter snakes and swarms of mosquitos. A small first-aid kit would also be advisable, especially when going on a longer trek. And of course don’t forget the basics like food and water.

Tackle-wise, take some of your favourite surface presentations. Mine are crawlers, poppers of 60-80mm and of course Z-Man FrogZ. Like on our adventure, don’t forget to take some subsurface stuff as well. On this occasion the Z-Man 4” Turbo CrawZ and 2.75” TRD BugZ rigged on TT Lures ChinlockZ jig heads scored the bites.