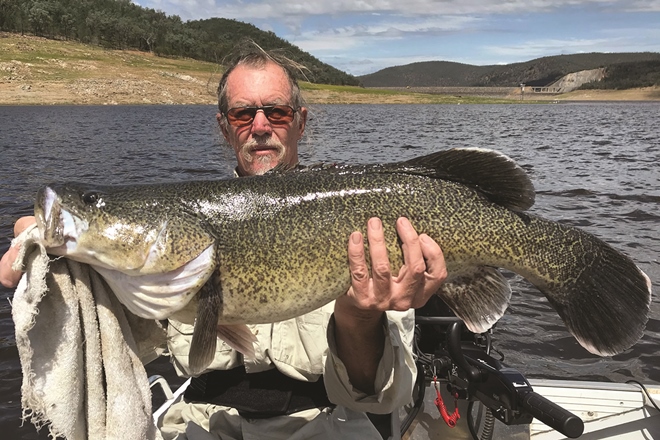 Glenlyon Dam on the rise

AS pen goes to paper, I look up and see the glint of water through the trees at the Glenlyon Dam kiosk.

The level in Glenlyon is just on 14 percent capacity, and we’re hopeful of steady rainfall increasing this between now and May. Though for now, with a little care we can access as far as the cod run.

Fritz White said it’s as low as 600mm at the old bridge at Glenlyon Station. So as I said, with care you can travel some distance up the dam. For those who use bait, the creeks and rivers are at last running. The water is a little brown still, but shrimp can be caught.

Although the stocking group were able to release some 15,000 cod, due to lack of water for the private hatcheries to breed silver perch and yellowbelly, no stocking of these species took place in our rivers and dams this season. With some luck, both yellowbelly and silver perch will be able to breed upstream in Pike Creek and have the small fry swim back into Glenlyon.

The water temperature of about 20C is suitable for a breeding run and the natural return of fish. Years ago, when we first asked anglers to help release fingerling, Ron Green and Steve Bradford came back from letting some go. Ron said it took seven cod fingerling to bait his set line.

I went white with shock. Everyone helping with the release burst out laughing.

Steve Bradford said he was going to say, “Can’t stop my boat, I’ve got too many small fish on board”, if Fisheries went to pull him over. Most boats would have up to five or seven buckets, holding over 1000 fingerling to be released, and they would return to let more go. Yellowbelly remain the main species eaten by anglers fishing the storages, followed by silver perch, catfish and cod.

In the late 1990s, fish creek surveys found over 90,000 yellowbelly were kept to be eaten over a nine month period. No doubt, this is still true of most dams where yellowbelly is the predominant species. As for catching them, shrimp is the best bait, with lures next in line.

We have seen photos of yellowbelly up to 5-7kg caught on lures or spinnerbaits. You either cast lures along rock ledges and over weed bed edges or use the trolling method of upstream and back using 75m length.

With the rising dam levels, good fishing can be had by working banks where rainfall run-off meets water in the dam. Yellowbelly come up the banks and inlets to feed on new grass-covered areas taking moths and other insects as well as small fish also feeding from the rising water.

Early morning and late afternoon is a good time to fish Glenlyon Dam, and is also a good time for the kids to practise casting. Not many branches or trees to get tangled on with a rising dam, and all you can hear when fish bite is, “Hey, Mum, Dad, help me!”

The photos show what’s been caught since the rise of the dam took place.