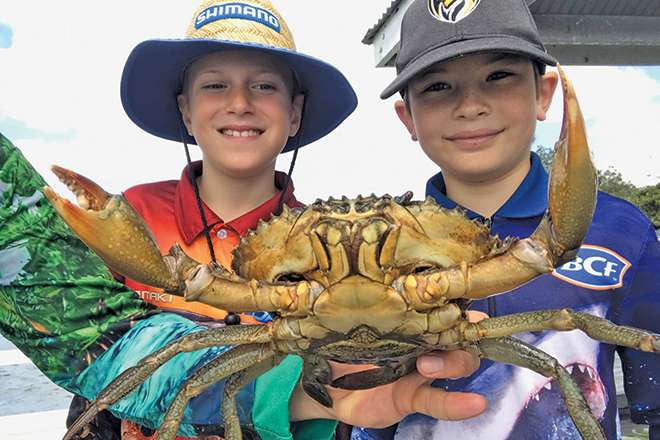 Guy and Flynn with a cracker mud crab.

It is February already! I hope that this isn’t a sign of how fast this year is going to go by. I want to jump back to December 2021 and share with you a story and act of kindness from one of our customers. Fantastic February fishing

Robert, a regular customer whom we know very well, had a fairly crappy 2021 – as it was for many people, he had a lot of ups and downs and many stressful moments. Fantastic February fishing

However, towards the end of 2021, Robert’s outlook became less overwhelmed and he started to see the proverbial light at the end of the tunnel. Fantastic February fishing

Robert decided to share his good feeling with others, and he purchased 85 packets of prawns so they could be handed out to random people who may have appreciated the gesture.

So, from before Christmas through into the new year we distributed them, and the results were heart-warming.

From kids going fishing for the first time to 80-year-old brothers who had been separated for years because of COVID-19 now able to catch up for a fish – I think we covered a huge range of people.

This was the first time we had been asked to facilitate something of this nature and I must say we were humbled when we saw a dad explaining what ‘pay it forward’ was all about.

Robert thank you for your awesome effort in paying it forward and for sharing with the community and people you don’t know.

Paddy was one of many who received a packet of Robert’s prawns and as you can see on the next page, he had a great day out fishing with his dad.

There have been some cracker catches out there, even with all the rain and wind.

Maverick had an awesome day with his dad when they tag teamed each other to land a cracking mangrove jack.

Working together they netted one from among the snags and took home dinner for a couple of nights!

Guy and Flynn hit the water around Cabbage Tree Creek during a period of mega tides and they absolutely cleaned up with bream.

They also had the opportunity to do a bit of crabbing and that too turned out to be fruitful with a couple of cracker mud crabs.

Well done, I hope you continue to land those big bream and keep up the great work.

Another regular to the area is Steve.

He seems to be out on the water whenever he gets a chance.

From the Pine River to Cabbage Tree Creek, he lands some awesome fish while relaxing.

Steve returned the other day with a nice flathead, and while he dropped a few more than he caught, he managed to walk away with dinner.

Well done Steve, it was well worth push starting the van to get out fishing.

It goes to show that with the heavy rain, not only do the dams have the opportunity to fill and help the stock in them survive, but it also gives our river systems a good flush.

I like to think that nature looks after its own and what’s better, it stirs everything up!

Not long after a good flush, Oscar ventured down to his local creek and had a ball.