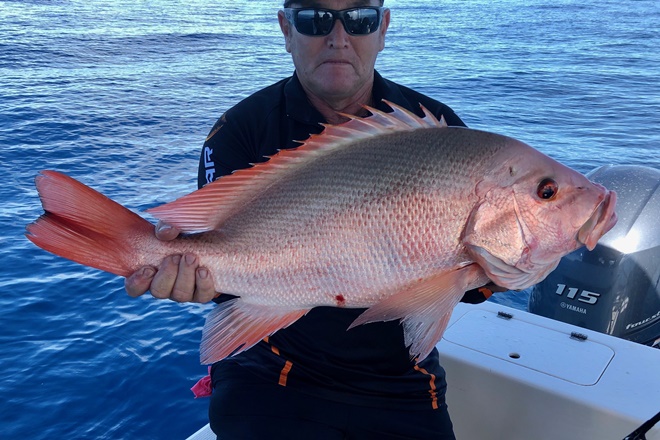 Kevin Sergiacomi with a nannygai he caught off Bundaberg last weekend.

How good was it to have some fantastic weather around the Bundaberg area during this past week?  With the Burnett Heads boat ramp overflowing with boat trailers, most people had the same idea – to head offshore.  By all reports there were some trophy-sized fish caught.  Good numbers of coral trout, red emperor, parrot, grass sweetlip, cod and red throat emperor kept anglers busy.  The wrecks like the Barjon and the Althea were both holding good numbers of spanish mackerel and cobia.  Floating lines or unweighted pilchards on the new Elkat Gang Hooks was a deadly technique.

A mate and I went offshore on Sunday morning and as we headed out there were schools of tuna and mackerel smashing baitfish right along the coastline.  Trolling lures that dive to around three metres and floating both pilchards and gar unweighted are the techniques that have been working well.  It shouldn’t be long before the winter whiting show up as well.  We have heard some good reports of quality whiting caught further south around Woodgate and Hervey Bay.

The blue salmon have worked their way back up into the Town Reach of the Burnett River and should be better with the bigger tides this weekend.  Samaki Vibes have been the go-to lures to chase these salmon.  At this time of the year flathead seem to be everywhere and good numbers of bream have also been thick on most rocky structures.

Plenty of anglers ventured up the Baffle and the Kolan, and with the magic weather there has been good numbers of whiting, bream and flathead caught.  My favourite soft plastic to chase the fathead is the 4” Gulp Nemesis and the 4” Gulp Swimming Mullet.  Some nice muddies have also been caught recently and it will be a good option this weekend.

This awesome little impoundment is fishing fantastic.  Most of the Australian bass are schooled up in the centre of the dam.  Bass up to 45cm have been caught on many different types of lures from Blades to Chatterbaits, Soft Plastics and Spinnerbaits.  The bass have been easy to locate with quality electronics and are awesome fun to catch on light gear.  Just bear in mind that the water levels are down a little, but I had no drama getting my boat in and out when I fished the lake recently.