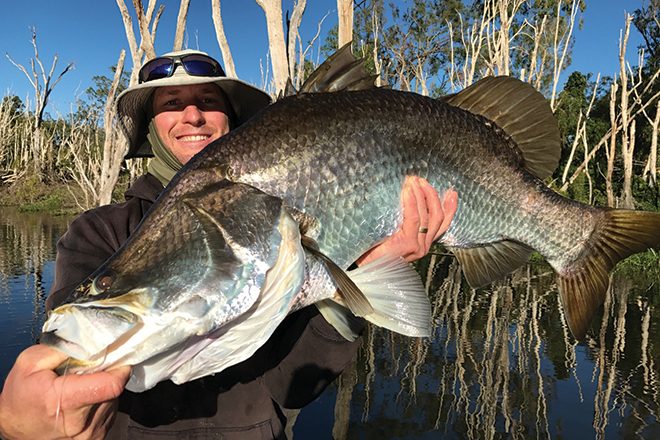 A darker, weed-dwelling barra for Sean. 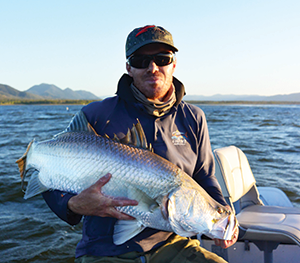 THERE is something addictive about broadening your fishing knowledge.

Trying new techniques, chasing different species of fish and travelling to new areas allows you to become a better all-round angler. I’m lucky enough to call Lucinda in north Queensland my home and it offers an endless array of fishy options. Pretty much any tropical fish you can think of calls these waters home.

I spend every opportunity up creeks, walking rainforest streams or out on the reef. We’re very spoilt here.

I had always wanted to chase impoundment barramundi but just hadn’t got around to it. Something about going fishing for barra that average the metre mark sure sounds good, but the chance of tangling with horse size fish that may have you buying a longer brag mat is simply way too good to not experience.

So a plan was hatched, and what follows is a recount of our first trip to the mighty Peter Faust Dam. We experienced all the highs and lows in search of the mighty barramundi. Cruising down the highway, we played the usual game of discussing what we might have forgotten. It seemed we had everything we needed, as we both had rods, reels and tackle bags.

Things like clothes, food and other important parts of life always sort themselves out after a few casts. It amazes me how non-stop chatting makes a car trip pass so quickly, and I can report very little silence as we cruised down the highway. We had a strict time schedule due to work commitments, so a plan was hatched for every part of the next day and night.

I must also add at this point that we had both finished six straight days of work and were relying on adrenalin and Red Bull to keep us focused. One of the best things about fishing is anticipation. Those shaky hands while tying knots and the heart beating a little faster; I can assure you we both had this big time!

After six hours of non-stop chat we arrived and it was a great feeling stretching our legs on the boat ramp. For the next 15 minutes all you would have seen was two head torches flashing around as we readied the boat and rigged rods in silence. I had studied the map of the dam a hundred times in the preceding few weeks but then realised we would be arriving at 2am.

It was clear we both really needed to cast. Sean was clutching his rod the entire ride, and if I hadn’t stopped he probably would have exploded. The electric motor was deployed and we both started punching out casts into the blackness. That first cast felt so good! We knew the dam was filled with loads of barra, and people caught them all the time.

But it isn’t until you get that first hit or see a fish that those stories become reality. There is a reason people call this place the ‘lake of a thousand casts’ and we were prepared to make double that if need be. Our first encounter came within the first five minutes of fishing. A loud boof right beside the boat saw us both cast and in turn get tangled, which was really, really disappointing.

About two casts later I saw a massive bow wave behind my surface frog that had my heart in my mouth. I swear both Sean and I didn’t breathe for the entire retrieve, but the fish wouldn’t eat. Over the next few hours we spooked several fish, with each one crushing our spirits. They would move out of the shallows and the waves would rock the boat, so we knew they were big fish, but we couldn’t get a hit.

But at least we had seen fish, so knew they were there. We fished this bank until sunrise and then decided we needed to try something different. We were both very keen to enter the timber and fish the weed beds and tree lines. This style of fishing felt more natural to us because it’s how we fish our local waters, and we both wanted to fight a big fish in all that structure!

The problem was the sheer number of fishy areas, weed beds, flats, snags, drop-offs and shallow bays. It was a case of keeping casting until we worked out some kind of pattern and being prepared for fancy work on the electric motor. It was now about four hours since we had seen any sign of a fish.
You know that feeling when you are just casting and retrieving in a sort of daydream and then… bang!

I had just watched my plastic land and drift perfectly down the side of a weedy tree stump, thinking how could there not be a barra waiting in there? There was, and the hit was hard and sudden, with that unmistakable barra thud, but it didn’t find the hook. This miss hurt badly, as we both wanted a fish in the boat, but it was clear sleep deprivation was starting to kick in badly.

Both being stubborn and crazy, chances were neither of us would give in to sleep until we fell over. I remember the first hook-up perfectly. We thought we had spooked a barra, which proceeded to swim under the boat and out into the depths in front of me. Lobbing a small cast roughly towards where I thought it headed, I got nailed on the drop.

With a solid hook set the fish leapt out of the water, showing off its size. My heart was beating at a rate of knots as it pulled braid off in powerful runs. The trees were everywhere and it was a case of going hard when I could. The moment it slid into the net, we lost it and there were some loud noises and several high fives.

We were stoked! The sheer bulk of this fish was amazing and the golden colouration across its shoulders was spectacular. A lot is said about how freshwater barra don’t fight well, but I can assure you this isn’t the case at all. This fish made lots of powerful runs and several head-shaking jumps.
After posing for a few pictures it was quickly swum beside the boat and swam away strongly.

The weight was lifted off our shoulders. We had succeeded but it had now woken us up and we wanted more. Over the next few hours I had several follows and subtle hits that didn’t hook up. Sean on the other had been casting in silence for hours and hadn’t had any hits or follows from fish. I could tell it was starting to get to him and when I hooked up to my second fish I swear he hesitated on the netting duties.

This fish was around the 95cm mark and fought insanely, taking long powerful runs with big jumps and head shakes. The girth of this fish was ridiculous and we couldn’t believe it didn’t stretch past a metre. Sean’s first fish was a memorable moment. Somehow he managed to make a cast that went over the top of an old tree, which meant as he was trying to wind his plastic back it was skipping on the surface.

I will add he was less than impressed with himself at this point, and anyone around would have heard this. Just as his plastic left the water on its climb up the tree, a big barra nearly leapt from the water and had a go at it. I quickly held off the tree with the electric and put my rod down so I didn’t cast.
Problem was Sean had his plastic caught at the top of the tree and was very, very unhappy with himself.

Luckily it somehow came unstuck and with a deep breath he made another cast out past the tree. The plastic barely had time to sink before his rod buckled as over a metre of barra stuck its head out of the water and tried its best to dislodge the hook. What followed was a great battle among the trees with quick rod work, and following the fish with the electric we were able to stay tight and out of danger.

The relief was clear when it swam straight into the net. I am certain anyone on the opposite end of the dam would have heard our celebrations. With a few fish in the boat, we decided to get some sleep, so we found a tucked-away bay, tied off to a tree and attempted to get comfortable. No sooner had I closed my eyes than the alarm went off and the sun was getting low in the sky.

We each had a quick sandwich washed down with another Red Bull as we motored to our chosen spot. Dropping the anchor, we rigged several rods and prepared to cast our arms off, which we did for about five hours before our first bump. I had been watching the sounder constantly all evening and not much was going on.

The odd fish cruised by to keep us interested but at about 10pm this changed. Schools of fish were constantly coming through and they seemed to be active. I was slow rolling a big soft plastic and it got bumped twice, both times nearly giving me a heart attack. Quickly casting again, the plastic got hit on the drop and I was on big time, with a fish ripping drag and leaping in the moonlight.

We ended up with two fish each that night, all on slow-rolled plastics, and interestingly they were all caught an hour before everything seemed to shut down again. It was such an awesome session and it was very difficult to try to sleep for the last morning session before going home. Unfortunately a problem with electrics forced us back to the ramp early.

But with seven fish landed, we were stoked. It is very possible for seven or more fish to be caught in single sessions by lucky anglers and I know the freshwater barra guns can double or even triple that tally, but we both hoped for at least one fish each on the way in, so were over the moon with our results. The drive home was spent planning the next trip to the dam for as soon as possible. We had caught the impoundment barra bug and caught it badly.