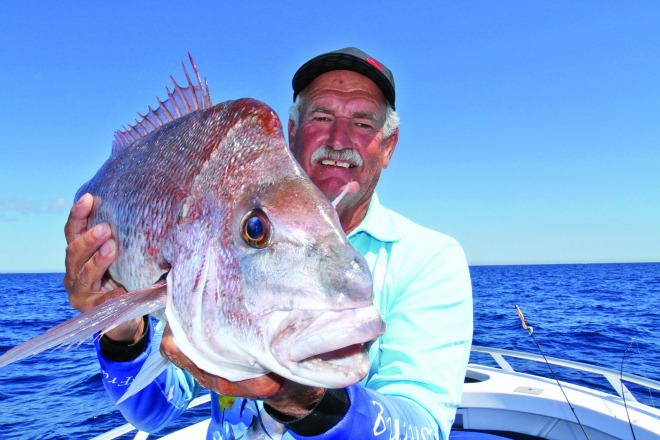 First Trip in the New Stessl

I HAVE been lucky enough to own about 10 boats over the past 30 years, and although I have enjoyed most of them, there were always a few things I would have liked to change or modify to create the perfect boat.

So when I had the recent opportunity to buy my new Stessl, I really wanted to include all the features to finally make this into my perfect boat.

Most of my boats have been half cabins but because the majority of my fishing trips were during the day, I only ever used the cabins for storage. It was also quite difficult to access my fishing gear from inside the cabin and was even harder to chase a big fish without either clambering around the cabin with the risk of falling in or having someone else constantly manoeuvre the boat into position.

My little Stacer was a fantastic boat because it had almost all the features I needed. First, it was extremely stable and three people could stand on one side without fear of tipping over. In fact, we could walk on the wide gunwales with complete confidence. I could fish all round, so no matter where the fish went, I was always in contact with it.

The casting deck also provided an adequate amount of storage, even though the only storage room was the live well. The Stacer was a magnificent boat but it was far too small to take out into the ocean.

On a flat sea I could reach speeds of 60km/h but as soon as we encountered a small chop the maximum speed was reduced to 20km/h and the relatively small 60hp motor was not powerful enough to safely negotiate the larger swells. I also noticed a small amount of scalloping on the bottom sheets as a result of the constant pounding over the waves. My new boat was going to be the perfect solution for my style of fishing.

The first feature I needed was to ensure it weighed less than two tonnes because my HiLux was restricted in its towing capacity. Though my previous Cruise Craft was a magnificent boat, my 100 Series petrol V8 LandCruiser used to guzzle 27 litres per 100km while towing the three tonne load.

While my dear wife Sheila does come out with me on occasion, there was definitely not going to be any sign of a cabin on the new Stessl. I needed a boat that would accommodate all-round unhindered fishing without having to hang on for fear of falling in as I negotiated the narrow gunwales or walk-around facilities I have experienced on some half cabins.

Maybe I am getting too old to fish offshore but if I am going to head out on the ocean, I want to do so in maximum comfort. 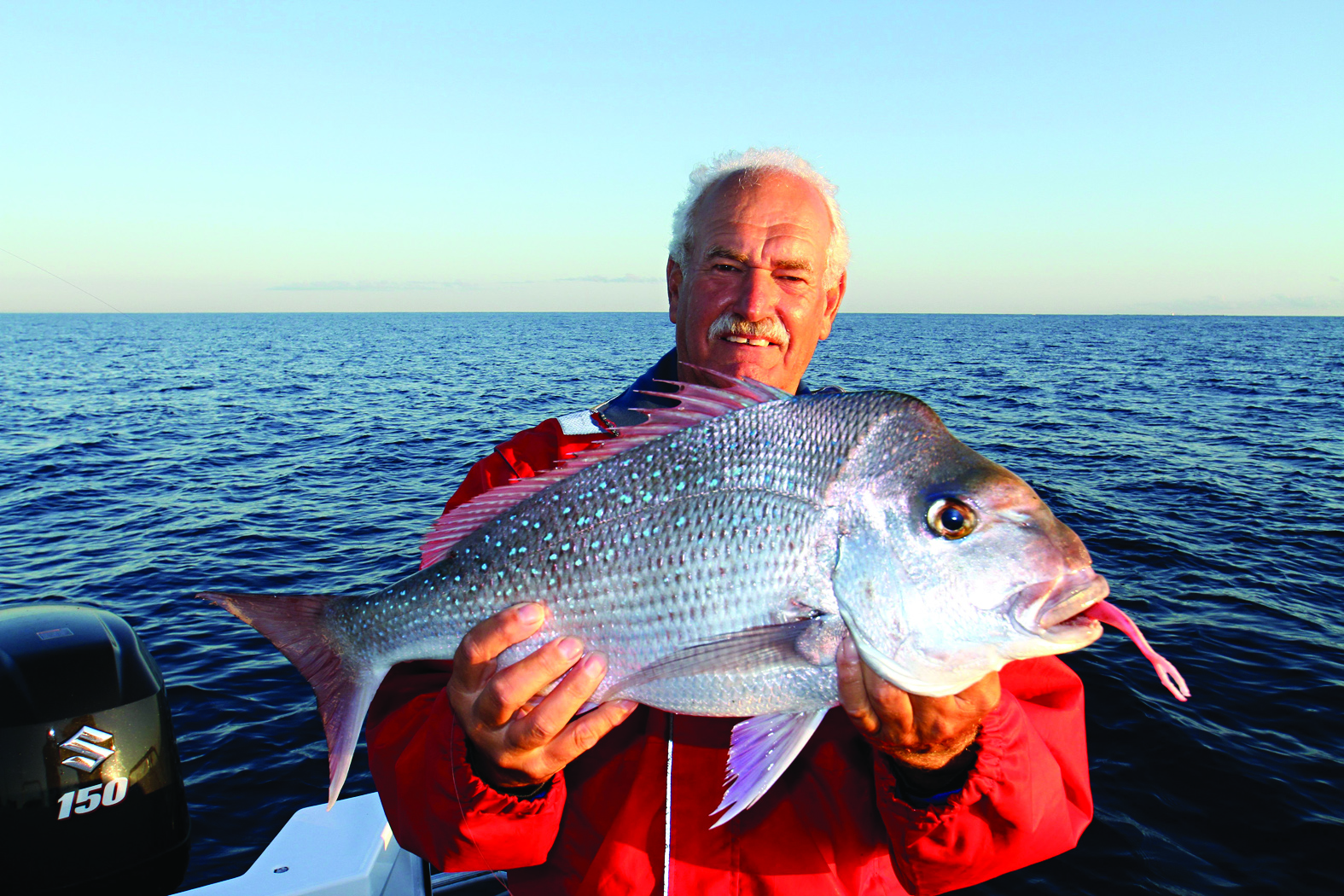 You may have noticed the vast majority of smart passengers will fight for the seat at the very rear of the boat because this is where the ride is smoothest. So when it came to configuration, I made it very clear I needed a big side console. The seating position on a centre console is still forward, which makes for a harsh ride, especially if the centre console happens to be in an aluminium boat.

In fact, you may have noticed that most people who travel in a centre console normally stand so the majority of the shock can be absorbed by their knees. Storage was another important feature and I needed to make sure all my gear stayed dry. And although necessary, all those life jackets can be a real pain. I could see this was going to be a major problem with the side console but I really didn’t want to compromise. It was time to talk to the boat people.

I mentioned I loved my little Stacer, so that was my first port of call. I must admit I was quite disappointed when I found out that none of the major aluminium boat brands manufactured a 6m side console and the possibility of customising the boat was next to impossible.

Cost was also a major factor and even though Quintrex, Stacer, Savage and Yellowfin now produce an aluminium plate boat, the cost was well out of my price range.

I was becoming quite disheartened until one of my mates suggested I have a look at Stessl. So I rang Stessl and to my amazement Rod Sloane (the owner) answered the phone.

I asked if I could make an appointment to have a look at some of the boats and inspect the quality of workmanship as well as the materials. Rod was only too happy to accommodate me but mentioned I would have to order the boat through one of his agents.

Well, all that is history and I have mentioned my findings in previous articles, but it is well worthwhile mentioning that while Stessl does like to maintain a standard configuration of each boat, the builders are quite open to customising some of the internals as long as it doesn’t mean changing the main structure of the boat.

It has now been two months since I collected my perfect Stessl, and having clocked up almost 100 hours, I feel I can accurately compare my experiences against my expectations. During quite an exciting visit to Coastal Powerboats, I hitched the boat to my Toyota HiLux and found that everything fitted with the exception of the safety chain, which was too short. After adding another heavy-duty D shackle we were on our way to Bribie Island. The Dunbier boat trailer tracked straight and true and towing the whole setup seemed to be an easy feat for the HiLux.

The trip to Bribie Island was uneventful and we averaged 9.87 litres per 100km. We launched the boat on the same day, but first filled the tank with 150 litres of premium petrol. This is when I first realised my boat was not absolutely perfect.

The 150hp Suzuki four-stroke motor roared into life as soon as I turned the key. The SeaStar hydraulic steering allowed me to manoeuvre the boat with my fingertips as we idled into Pumicestone Passage. With the motor tilted down, I slowly pushed the throttle forward and found it difficult to see over the front of the boat.

This was the first time I realised how long the boat really was. When I stood up I discovered I could easily see over the front of the boat and continued to increase the throttle. It didn’t take long for the boat to come onto the plane and it was happy to sit there at just over 3300rpm. If you apply the power more quickly the big 150hp Suzuki brings the boat onto the plane in two or three seconds, so visibility is not really a problem.

We passed under the Bribie Island Bridge and were heading towards Moreton Bay when I saw an air sea rescue boat coming back into port and trailing a 1m-high wake. This was a great opportunity to see how the Stessl handled the chop.

I kept the boat on the plane and was surprised when we hardly felt the wave passing under us. I was excited so I turned the boat around, increased my speed to about 50km/h and crossed the wake again. This was amazing. We hardly knew we had crossed the waves and there was no noise. The boat was absolutely quiet.

It was hard to refrain from fully opening the throttle, but with less than one hour on the clock I had to behave. I was having a ball trying to find a wave and ended up having to create my own. It is unbelievable how the weather is always perfect when you are not going fishing.

My initial trip on the water was quite short but at least I was comfortable in knowing the boat was going to be predictable over a choppy sea. I arrived home and over the next few days installed my new Garmin GPSMAP 7410 and TMQ autopilot. Garmin has produced a new single transducer that allows you to use all three views: down view, side view and traditional view. The 10” screen is large enough to accommodate both the chart and sounder without the need for a magnifying glass and the TMQ autopilot was great value. It was relatively easy to install, however I spent a few hours trying to manufacture a bracket for the feedback unit. I haven’t been able to interface the autopilot to the Garmin yet, but I only wanted the autopilot to hold the boat on course while trolling and fighting fish.

I was now ready to go fishing.

If there is one thing that Frank Oostenbroek (FrankO) is passionate about, it's fishing with soft plastics. Whether it is in fresh water, estuaries or out chasing marlin, FrankO has proven his ability to continually to catch the big fish. FrankO offers a variety of services including a fishing school, photography and electrical fit-outs on boats.
Previous Kicking Goals at Lake Kinchant
Next Free Horsepower Upgrades on Mercury FourStroke 80-150hp 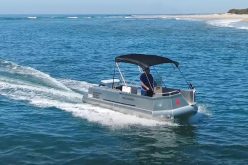 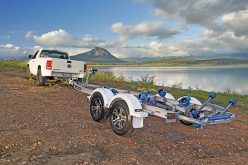 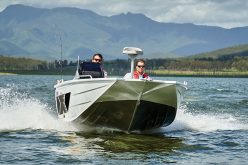 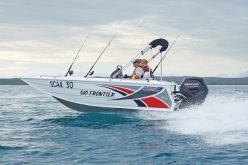 Telwater and Mercury create the ultimate in turnkey packages

Sophistication is often found in simplicity, particularly when it comes to the best boating experience. …