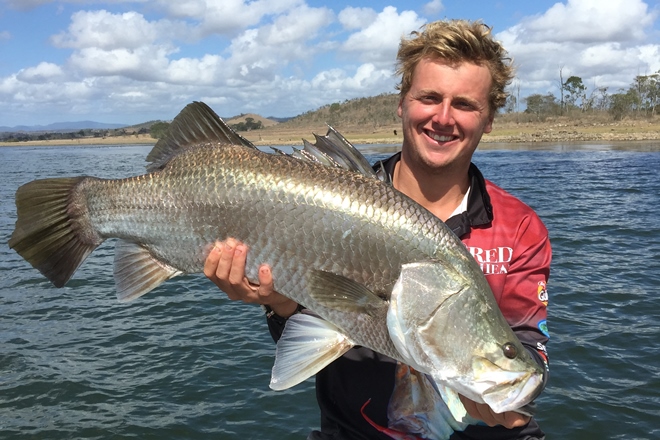 I hadn’t been fishing in a long time due to work and other commitments but I had finally organised 10 days off from my job at Noosa Jet Ski Hire to travel north to Lake Kinchant, inland of Mackay, to chase big barra. Two of my best mates Izaiah Sherwin and Matty Hoffman were pumped for an awesome barra holiday. The boys and I left about 2am on a Friday and the 11-hour drive was fairly good with only the one drama of a flat tyre on the boat trailer just south of Rockhampton. We arrived at Kinchant Dam about 1pm, set up camp and were keen to get straight into it.

The wind was howling with at least a 30-knot southeasterly blowing, but we still got around and checked out the dam and found good ground just west of the lower dam wall. We spotted plenty of decent barra on the sounder but we only fished for a couple of hours before heading back to camp to get some sleep.

The next morning we were up at 6am and headed back to the spot where we had found barra on the sounder the previous day. We fished there for about an hour but had no luck, so we decided to head into the back of a bay. Unfortunately we ended up hitting a tree with the electric motor and the whole electric was nearly ripped right off the bow. What a drama – barra fishing isn’t the best without an electric. I gave my mate Benny Durkin a call as he lives fairly close to Kinchant. Thankfully, he said he would give me a hand to fix it up later that arvo.

In the meantime we decided to anchor on a small rocky point to get out of the wind and try our luck. We were casting a mixture of plastic Berkley PowerBait Rib Shads, old Berkley Hollow Bellies and Squidgy Slick Rigs. The fishing was very slow so I decided to put Spike-It Chartreuse scent on my lures. This seemed to make a huge difference and on the second cast I hooked and landed a cracking 96cm barra. I was stoked to have landed the first fish of the trip and my first barra for a long time, and it was a beauty at only 4cm shy of the magic metre mark.

I ended up hooking another big barra five minutes later that went 95cm. Izaiah then put some Spike-It scent on his lures and only 20 minutes later hooked and boated his first Kinchant barra. It was a very solid barra, coming in at 98cm, and we were stoked. With the wind picking up even more we decided to head back to camp to sort out the electric motor. I drove straight to Benny’s place and he helped me fix it. Thanks again Benny!

While there we chatted about some good areas to fish, with the upshot being that Ben decided to come out the next day to take Izaiah and I out for a fish and test drive his new boat, a Haines Pro Strike bass boat. It was awesome to get local knowledge about the dam, especially from a champion barra fisherman. Ben won the 2014 ABT Barra tour, so I knew we were in the right hands.

We motored around for most of the arvo, checking out a number of different areas and ended up fishing a weedy point where the fish were visible on the Humminbird 1198 SI sounder. We saw a group of six barra come through on the right-hand side, so I cast my Pearl White Berkley Rib Shad out and on the very first crank of the handle I nailed an 86cm barra. These side-imaging sounders are a must-have for any fisho. To be able to see where the fish are is fairly amazing and to be able to cast to them and get a hook-up straight away is gold.

After this the fishing slowed and we didn’t catch another barra until right on dark. That’s often when the fish really come on the chew. Ben nailed a couple of decent fish around the metre mark and Izaiah hooked a cracking barra that nearly spooled him. We ended up landing the barra but found out why it went so hard; Izaiah had actually hooked the fish in the tail. The bite period again slowed so we decided to call it a night.

It was great to have a fish with Benny and for him to show us plenty of new tricks and areas to try. Over the next few days we hooked several decent barra well over the metre mark but unfortunately dropped them when they became airborne and threw the hooks. Overall it was a fantastic trip and between the three of us we managed to land 26 barra, which we felt was a pretty good effort. Thanks for a great trip guys, I can’t wait to get back there again soon.

Callum first went fishing with his dad when he was about four years old, and he’s been hooked ever since. He got into freshwater tournament fishing when he was roughly 13 years old and has competed in bass and barra tournaments since then. His biggest achievement on the competition circuit came when he was 16, becoming the youngest person to win a Bass Pro. He eventually became the number-one ranked angler in the Australian Bass Tournament Series and is also part of the Purefishing Pro Team. Callum recently obtained his coxswain’s licence and is in the process of getting his bass boat in survey. When this is done he intends on setting up a charter business, running salt and freshwater charters on the Sunshine Coast.
Previous Usual Suspects Biting at Tin Can Bay
Next First Trip in the New Stessl