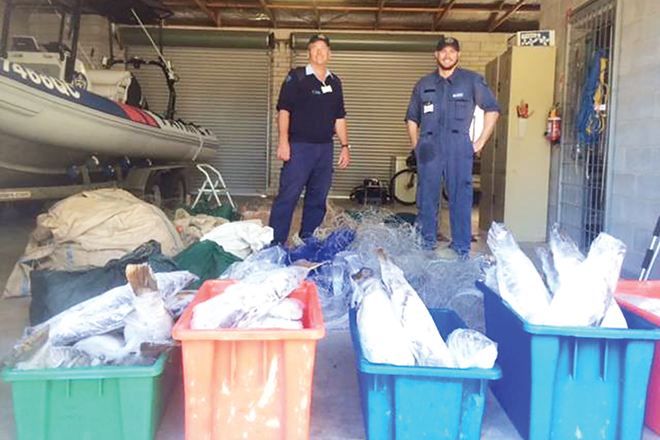 QBFP officers from Hervey Bay with the seized fish and nets. Photos: Department of Agriculture and Fisheries

QBFP district manager Greg Bowness said three men from one family had been prosecuted as a result of the fisheries operation, resulting in fines of $28,500 and the forfeiture of a large number of seized items. “This is the culmination of a QBFP operation across Central Queensland to target a family syndicate of recreational fishers intent on profiting from unlawful activities,” Mr Bowness said.

“In the latest court appearance, a Fraser Coast man pleaded guilty to six charges of possessing commercial fishing nets and possessing excess and regulated fish and was fined $13,000.” Mr Bowness said the prosecutions are the direct result of intelligence-based patrol work and collaboration between QBFP officers.

If anyone suspects illegal fishing, they should report it to the Fishwatch hotline on 1800 017 116 so it can be investigated. For more information on Queensland’s fishing rules, visit www.fisheries.qld.gov.au or call 13 25 23. You can follow Fisheries Queensland on Facebook and Twitter (@FisheriesQld).