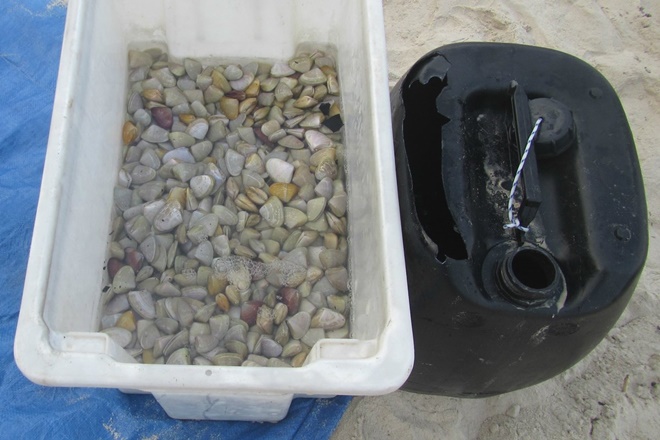 Fisheries Minister Mark Furner said the two fishers were caught on Teewah Beach with a total of 3591 pipis in June 2017.

“The possession limit for pipis in Queensland is 50 per person, so the two fishers had in their possession 3491 more pipis than is legally permissible,” Mr Furner said. “Queensland Boating and Fisheries Patrol officers found the pipis, with an estimated value of $900, in two black drums during an inspection of the fishers’ vehicle and returned all pipis to the water. The large number of pipis found suggests they were taken for sale on the black market.”

“To address the black marketing of seafood, it is proposed to amend the Fisheries Act 1994 to strengthen the enforcement powers of Fisheries inspectors and the penalties for serious offences,” he said. “There was overwhelming support for these changes through consultation, with more than 90 percent of people supporting strong compliance powers and heavier penalties to address black marketing.”

Queensland Boating and Fisheries Patrol Noosa district officer Matthew Albiez said taking such a large number of pipis was a very serious offence. “Despite signs being present at the site, the fishers either ignored them or failed to make themselves aware of the limits that apply to recreational fishers,” Mr Albiez said. “Possession limits exist to conserve and enhance the community’s fisheries resources and fish habitats to promote ecologically sustainable development. The very large number of pipis possessed by the fishers shows a lack of consideration for the potential consequences to fisheries stock in the future.”

“From July 1, 2017 to July 1, 2018, 32 Fisheries Infringement Notices were issued and another 24 people were cautioned by QBFP in relation to these types of offences,” Mr Albiez said. “These offences are difficult to detect but our valuable fisheries resources require protection if future generations are to enjoy them. Fishers have a responsibility to ensure they understand and are up to date with Queensland’s fishing rules.”

For more information on Queensland fishing rules, visit www.fisheries.qld.gov.au, call 13 25 23 or download the free Qld Fishing app from Apple and Google app stores. If you suspect illegal fishing, report it to the Fishwatch hotline on 1800 017 116.