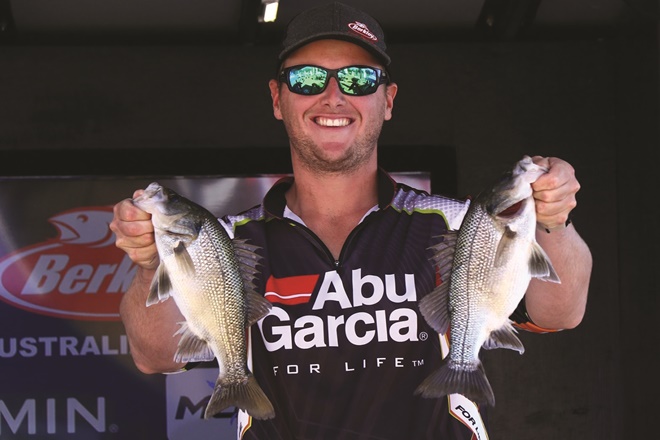 The author filled his bag during the final session.

LAST month I wrote about my pre-fish for the B.A.S.S. Australia Nation round to be held at Lake Boondooma.

The pre-fish certainly paid off because I ended up in third place, which I was absolutely pumped about. So in this article I’m going to run you through how I went about the tournament. On the official pre-fish day I headed straight back to the spots where I had found fish two weeks prior. I found the fish still holding in the same areas and didn’t fish at all for the first four hours, instead just drove around to locate any new areas that might hold fish.

To be honest, I was very nervous about the first session. I knew it was going to be tough fishing. Heading to the Junction for the first two hours, I went into the timber and sounded up a few fish but had no luck, so headed back to the weigh station pretty disappointed.

I was more confident heading into the second session because I knew the bite was better in the afternoon. I went straight back to the Junction and within the first hour had two fish in the well, as did my non-boater on board. We managed three double hook-ups for the session and boated at least 20 fish. I was absolutely stoked.  Heading back to the weigh-in with two fish of about 1.7kg, I hoped they would keep me up there in a tough bite.

Talking to my dad overnight, I was concerned about what I was going to do in the final morning session. Dad reckoned the bite time would be 7am judging by the moon phase, so I thought I’d hit the Junction for the first 15 minutes and if I had no luck would have to make the tough decision to head into the timber to try to make something happen. That is exactly what happened.

Having the leading non-boater John Kennedy in the boat with me, I knew I’d have to perform to keep him up there. After fishing the Junction for 15 minutes, I told JK we’d have to do something different because if the fish were going to bite, we would have caught one by now. I also knew the bite period would end soon, so I headed into the timber to where I’d caught heaps of decent bass in my pre-fish.

When we arrived, I started sounding for about 100m and looking around isolated trees and boulders for small wolf packs of bass. Within five minutes I had located them. Using an Abu Garcia KR-X 2-6kg 721ML rod matched to an Abu Garcia Revo MGX 2000, I’d vertically jig a 1/4oz blade on 6lb Berkley FireLine Ultra 8 braid and 10lb Vanish leader. My sounder allowed me to really zone in on the fish and after a few minutes I’d caught two decent fish and was pumped.

JK also caught a cracker fish that ended up weighing 1.6kg. The fishing then went quiet until about 10am when they came back on the chew for 20 minutes. We didn’t land any in this bite time, instead losing two quality fish. John hooked a big bass that ended up snapping his rod in half, and the worst part was losing the fish.

I was absolutely pumped with my decision to head from the Basin to the timber in the last session and it ultimately saw me jump from 12th to third place. Another great weekend!

In other news, Borumba Dam has been fishing amazingly. If you’re heading out to the dam and would like to learn how to catch big Borumba bass, book a five or nine-hour Untapped Fishing Expedition with me. Give me a call on 0412 887 651 or jump over to untappedfishing.com.au

Callum first went fishing with his dad when he was about four years old, and he’s been hooked ever since. He got into freshwater tournament fishing when he was roughly 13 years old and has competed in bass and barra tournaments since then. His biggest achievement on the competition circuit came when he was 16, becoming the youngest person to win a Bass Pro. He eventually became the number-one ranked angler in the Australian Bass Tournament Series and is also part of the Purefishing Pro Team. Callum recently obtained his coxswain’s licence and is in the process of getting his bass boat in survey. When this is done he intends on setting up a charter business, running salt and freshwater charters on the Sunshine Coast.
Previous Fishers’ pockets pipped $8000 after excessive pipi take
Next New mulloway rules in NSW