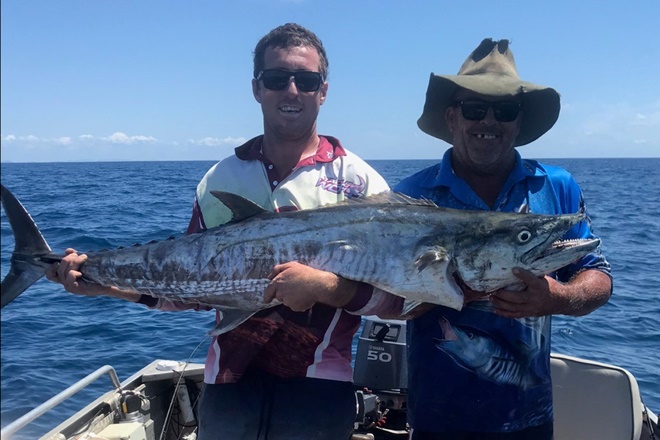 Ben and Hunter Cole with the big Spanish mackerel they caught while fishing inshore last weekend.

The offshore reefs around the Bundaberg area have been fishing amazing over the past week!  Plenty of trophy-sized red emperor and coral trout have been caught.  Plenty of the big bar cheek trouts have been caught around the Fifteen Mile area.  Fresh flesh bait and live baits have been the standout baits to chase them.  Make sure you don’t go out there without bait jigs because livies can change your day when the fishing is slow.  There’s also been heaps of cobia getting around.  I always have a rod combo with a 5” soft plastic rigged up and ready for the cobia that like to come up to the surface to check out your boat.  Hopefully the weather plays the game for us this weekend.  The small tides will be in our favour while fishing the deep.

The inshore reefs have fired up over the last couple week, with Spanish mackerel and one metre plus queenfish being the prize captures.  Most of the Spanish are being caught on live baits and floated gar while anchored.  The queenfish have mostly been caught on surface lures.  The Halco Rooster poppers have been a standout popper.  The schoolie mackerel have also shown up in really good numbers.  Getting your bag limit in under an hour has been easy to do.  Floating pilchards and fast retrieving 50g flasher spoons have been the deadly techniques.

The Burnett has been producing some very nice fish over the past week.  Some very nice sized grunter and bream have been caught.  Most of the grunter have been caught on Gulp soft plastics and soft vibing lures. The bream have taken a liking to small Zman Grubz slowly twitched off shallow rock bars.  There’s also been some cracker sized mangrove jack caught over the 50cm mark.  Most of these fish are being caught on paddle tail soft plastics slowly rolled off rock bars and jetties.  Don’t forget to take your cast net with you because there’s still some real nice sized prawns getting around.

The Baffle and the Kolan have been fishing unreal for flatties and jacks.  Most of these fish have been caught on the smaller profile soft plastics such as the 3” Zman Minnowz.  The start of the out-going tide early in the mornings this weekend will be the ideal time to target them.  There’s also some trophy-sized barra roaming around the deeper holes so don’t forget to throw some 20g Samaki Vibes or some big livies down to try your luck.  Don’t forget to throw your crab pots in because there’s been reports of some cracker muddies being caught.

Lake Monduran again fished very well over the weekend.  Of course, the early mornings and late afternoons are the hot bite times.  Jackal Squirrels and 4” soft plastics have been the standout lures to get the bite.  Also, if you want to mix it up and do some surface fishing the Zman Pop Shads are ideal for the job.  It’s hard to beat a surface strike to start your morning off!