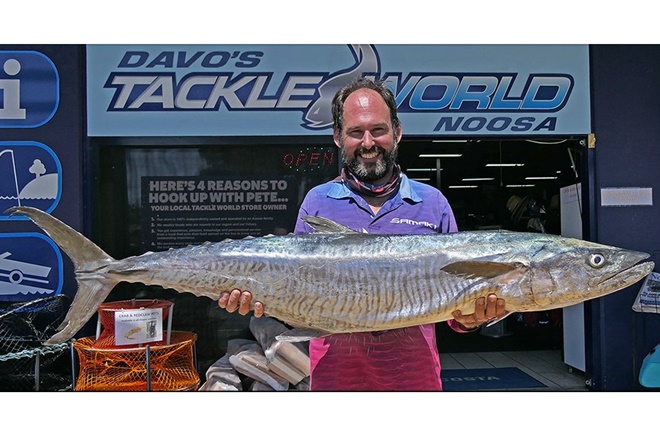 Yak angler Warren Norup from Woombye put in heaps of time and paddled a lot of kilometres on Sunshine Reef on Sunday morning and was finally rewarded for his efforts when this 17.5kg Spanish mackerel jumped his trolled bull bonito bait. Photo: www.fishingnoosa.com.au

No complaints from Sunshine Coast anglers

This week’s weather has been a pearler, allowing boats big and small to make the trek to their local reef. There have been no complaints coming from Double Island with anglers landing large red emperor as well as scarlet sea peach and nice gold band snapper. For anglers targeting these fish on bait you cannot go wrong with a nice slab bait of hussar or mullet. With the warmer weather still persisting the colder water fish have been hiding in the depths of the Hards and north Barwon banks. Fish including snapper up to 6kg and big pearlies have been boated on paternoster rigged pilchards and squid. In closer, Chardons Reef and Jew shoal have been producing nice Spanish and wahoo on slowly trolled dead baits and livies on stinger rigs. For anglers chasing the reef dwellers, there have been plenty of grassy sweetlip and spangled emperor taken on fresh mullet and pilchard baits. With the moon being at its fullest these fish have been feeding into the night with persistence paying off big time after dawn. Sunshine reef has seen multiple anglers boat the elusive coral trout on squid and pilchard cocktails as well as live yakkas. These fish will give their all to take your bait into the nearest coral structure and would highly recommend a leader upgrade to 60lb fluorocarbon if anglers chose to chase such fish. For pelagic fisherman the tuna have shown up in numbers with some big fish in the mix. Although these fish may be thick, at the moment they are eating tiny transparent bait fish. This will require a small presentation to trigger one of their infamous spool dumping runs. Keep lines light and leaders as light too.

This week’s weather has granted beach fisherman with pleasurable swell and great catches. Along Peregian has been the hot spot for whiting, bream and the occasional flathead. For whiting and bream, anglers have seen success on beach worms and peeled prawn. For tailor and flathead, smaller fish presentations such as pilchards, hardy heads and white bait have been the producing methods. Flathead are subtle hunters and will go for baits within 1 metre of where they are laying. Using smaller sinkers that let your baits move with the onshore drift allows baits to cover more ground and find more flathead. The Jew fish have been active over the last few days with the full moon stimulating them to hunt actively across the gutters of Sunshine and Peregian beach on the high tide. These fish are somewhat lazy and will eat predominantly on the slack of the tide. Be sure to chase these fish with live mullet or strip baits during this period to optimise your chances of catching them

The lower estuary has been the main focus this week with a variety of trevally on the catch list. Golden trevally have been taking prawn imitation plastics and Keitech easy shiner soft plastics. While the water is clear it is necessary to step leaders down to as low as 4lb with 6lb main line braid as they can become very line shy. The new Tasline 12lb has a PE rating of 0.6 so it’s very fine for such a strong braid. Other fish include whiting and flathead especially around the dog beach and the drop offs around the frying pan and along the current line toward woods bays. These fish will happily take a range of flesh baits including mullet and bonito as well as soft plastics like the entice bungy bait grubby in red glimmer colour. Further up toward the mouth of Cooroibah there have been a few school sized jewies caught on hardbodies like the Zerek Tango shad and of course the Jackall squirrel. These fish will also take live baits and 4 inch paddle style soft plastics loaded with scent too.

In the run up to the full moon the saratoga were chewing pretty hard at Borumba on a wide range of surface lures and top water weedless presentations. Small poppers like the river2sea bubble pop and Zerek poparazzi have raised a lot of interest. Weedless rigged Keitech 3 inch plastics slow rolled out from heavy cover has also been working well. As the sun rises then hardbodies that suspend also work well at getting a strike from those fish sitting under the snags. Take a look at the OSP Dunk and Power dunk lures when in deeper water along with OSP bent minnows in the 86mm size when the bite is tough. These lures have an action that no other lure has and is often all you need to entice a big toga or bass into striking hard.