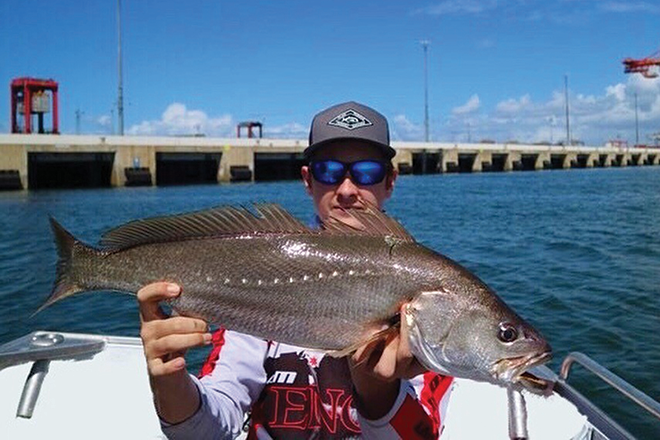 The author held a school jew pulled from the Brisbane River.

Back fishing Brissie River and the bay

APOLOGIES for not contributing an article in last month’s edition of Bush ‘n Beach.

School and work got in the way of fishing, and I didn’t wet a line for five weeks. I’m happy to say I’m back in the saddle now and knocking over a few fish. I have been focusing on fishing the Brissie River and Moreton Bay chasing snapper, jewfish, dart, cobia and the odd tailor.

May is an excellent time to be on the water, and while you may need to don a jumper for those early morning starts, the temperature is generally pretty good throughout the month. As the weather cools, the fishing gets hotter, and a multitude of options are available for keen anglers willing to put in the time and effort.
I get very excited at this time of year as the offshore snapper season starts to get into full swing.

There is nothing quite like floating a lightly presented plastic or bait and getting slammed on the drop. I plan to do a lot more fishing this season, and having a boat licence will definitely help me get out there more regularly. The imminent winter also means estuary fishing will heat up. An enjoyable option is to chase mulloway, threadfin salmon and flathead in the southern waterways such as Jumpinpin and the Logan and Brisbane systems.

All these species respond well to lure and bait techniques, but I have a lot of success fishing soft vibes and plastics. The Zerek Fish Trap is quickly becoming renowned as an all-round estuary lure and works on everything from barra to flathead, so I’d definitely make sure a few are in your tackle box. The Brissie River has become my second home of late.

I’ve been spending lots of hours on the Brissie trying to further figure out the system because fish are becoming a little harder to catch.

I have managed to nail a couple of good fish including jewfish, snapper, cod and my mate even managed one cracking bream at 44.5cm. Every one of these fish has come on 95mm Zerek Fish Trap vibes.

Another interesting thing I’ve learnt is running a good-quality, abrasion-resistant braid is very beneficial. My mate Liam learnt this very quickly as he got blown away on four occasions, whereas my only issue was when I hooked an unstoppable creature that had me behind a pylon before I had a turn on the reel.
Zerek Hy-Braid in the 30lb and 40lb strengths has been my braid of choice and I’m more than impressed with it. I highly recommend you get yourself a spool or two.

I’ve found that depending on what species you’re targeting, your success rate will rely on the stages of the tide. When targeting threadfin and mulloway, I believe they chew on the turn of the tide and at the start of the run-in. Smaller tides definitely make for easier fishing, but these fish will eat on bigger tides as well.

For snapper and flathead, I don’t mind a bit of run, and the last of the outgoing tide has produced a couple of fish for me lately. Time on the water will improve your understanding of a system, and the Brissie River is no different, so get down there and have a crack! Please remember to be considerate when fishing this system because it cops lots of pressure recreationally and commercially, and if you don’t plan on keeping a feed then bring a release weight and venting tool. Using these two items will greatly increase a fish’s chances of survival upon release.

I have been venturing into Moreton Bay chasing longtail tuna of late. I had a session during the second week of the school holidays with my close mate Mitch Reed where we spent the day driving for hours upon end to find a patch of fish that stayed up long enough for us to get a cast in. Unfortunately for me, I was the one on the wheel and not the rod, so Mitch got to have all the fun, landing two tuna right on a metre in length.

The first one Mitch caught was sadly thrown back into the mouth of a massive bull shark lurking under the boat. It was a little scary because the shark came out of nowhere and swallowed the tuna whole. The very next cast, Mitch was onto another fish, which he made short work of, and this one was safely released after a quick photo.

It’s very rewarding when one of these often-frustrating fish hits the deck, and you really appreciate how much time and effort went into catching it. I have to thank my mate and fellow BNB scribe Joe Cormack for answering my call and pointing me in the right direction. Sharks have been a real problem lately, as even heavy stickbait gear is not enough to win the fight on some occasions.

During another trip, we were teasing a pack of six bull sharks with our stickbaits, which was both scary and amazing at the same time. It just so happened that a school of tuna popped up within casting range at the same time. I plugged a brand-new Zerek Zappelin 160 into the mayhem and got crunched straight away, with a longtail leaping into the air and crash tackling it in a spectacular display.

I locked the drag and hung on as Joe drove 300m away from the sharks. With the powerful Venom Stickbait rod buckling, there was hurt at both ends.When you’re locked up on 60lb braid, something is bound to give, and this time it was the fish. I finally got another look at what I was fighting and to my dismay I saw a 3.5m bull shark hungry for an afternoon snack chasing a beautiful big Moreton Bay longtail.

I opened the bail arm, trying to give the fish a chance to outrun the shark but to no avail. The fish headed straight down and got eaten, which was really disheartening to see. But that’s fishing.

At this time of year in the bay you can also tangle with an abundance of species commonly thought of as beach dwellers such as tailor and dart. Most tailor have been 40-45cm in length, and these fish will put up a decent fight on lighter gear. I have found they are sitting on shallow banks in the bay following bait around for an easy feed.

While a more traditional method of catching tailor is a pillie on a set of gangs, I have been targeting mine with lures, in particular the new Bone Dash 90S sinking pencil/vibe. This lure is new to the market and is available through Wilson Fishing. It is a great multi-purpose lure to have in your tackle box. The dart have been of reasonable size as well, and at about 40cm they can give you an awesome fight on 4-6lb braid and leader.

I have been casting small 3” plastics rigged on size 2 TT jig heads in the same area I have been finding tailor. Again, time on the water will help you succeed in all your fishing ventures. This time of year has the potential for awesome all-round fishing options, so get into your local tackle shop, grab some gear and get out on the water to experience what southeast Queensland has to offer.

I’m currently preparing to head to Gladstone for a few days fishing the estuaries, so stay tuned for the write-up in next month’s edition of Bush ‘n Beach.
Tight lines and smoking drags.