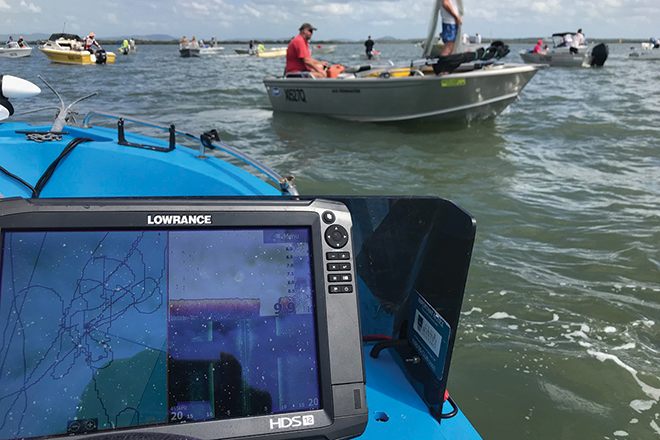 TODAY’S sounders and GPS units have benefitted from recent advancements in technology. It wasn’t too long ago a depth sounder was simply that; a device to tell you the depth so you didn’t run aground.

Now, the units are jammed with features such as CHIRP, StructureScan, DownScan, SideScan, SonarHub, Broadband Sonar and the list goes on. While each of these features has a specific use, the main take away is the end user now has a device that provides exceptional-quality images from all around the boat, which has to be a good thing.

Another advantage of these technological advancements is you don’t need to be an electrical engineer to make them work, with basic plug-and-play operations the norm for most units. One brand that continues to push the boundaries to provide an easy-to-use fishfinder and GPS is Lowrance, in particular the HDS range of sounders and GPS units.

I previously had a HDS-12 Gen2 Touch fitted to my 4.5m Polycraft, which at the time blew my mind with how easy it was to use and the detail it provided compared to units I had used previously. Initially the 12” screen looked more like something I should be watching movies on (which you can) than a sonar and chartplotter.

However, these days it is almost the norm for a 7”, 9” or 12” device to be located at the helm, with dedicated sportfishing boats often running an additional unit at the bow to be used when fishing and driving the electric motor.

And while a 16” model would probably just squeeze in the dash on the Polycraft, I’m more than content with the images on the 12”.

I guess the crux of it is you will usually try to get the biggest unit you can afford that fits on your dash because it will make it easier to see and identify the different images on the screen. Time is a precious commodity these days, and you need to maximise your time on the water because there is no point fishing where there aren’t any fish or bait.

This is where sounders such as the new Lowrance HDS Carbon definitely aid in fishing and ultimately catching and as such I’ve recently upgraded to a Lowrance HDS-12 Carbon on the Poly. To run through some technical terminology, the latest Lowrance HDS Carbon unit features ultra-clear SolarMax HD multi-touch displays with high-bright LED back lighting and an advanced anti-reflective coating to provide wider viewing angles suitable for any lighting conditions.

In layman’s terms, the HDS Carbon features an ultra-clear display that is easy to see from anywhere in the boat, and this has been evident when I have used it. Another noticeable difference to the older model is it responds much faster when switching displays or using different features. The Carbon also features an integrated wireless system and Bluetooth, which is unreal and means the unit will notify you when a software upgrade is available and will do it wirelessly.

You can’t get much simpler than that. No more having to remove a memory card and download an update – just follow the prompts and you are away. I found the new unit very easy to install because it fitted into the existing Gen2 bracket and I could use the transducers already fitted. If you aren’t upgrading from an existing HDS and are simply buying a new sounder, it is possible to fit the TotalScan transducer, which is an all-in-one TotalScan Skimmer transducer for Broadband and CHIRP sonar, as well as StructureScan HD with SideScan and DownScan Imaging. In terms of functionality and ease of use, the HDS Carbon ticks a number of boxes. Turning the unit on is simple and you can easily adjust the screen brightness. You can also customise your view and save a few different settings.

For example, if you want to run SideScan, sonar and chartplotter, it would be advantageous to run the SideScan across the entire bottom of the screen with the sonar and chartplotter sharing the top section equally. This way you can get the most out of your Side-Scan and still see the other displays. While not a new feature, I like the fact you can scroll back on the screen and mark exactly where structure, bait and fish are.

As soon as you move the curser to the spot and mark it, an overlay appears on the map and shows you exactly where that spot is. From there you can decide whether to make it a GPS mark in a few simple steps or go back to your current sonar screen. One visual change from the Gen2 to the Carbon is the addition of buttons down the side of the unit.

The display is still a touchscreen, which is awesome, but the buttons make it even easier to use, especially when under way. Overall, I am pleased with the changes and upgrades over the older HDS-12, especially the display, which makes finding bait and fish much easier, and that is the name of the game. I’m still playing with and learning about some of the features, so will give you an update in a few months on how I’m going and run through some other features of the unit.