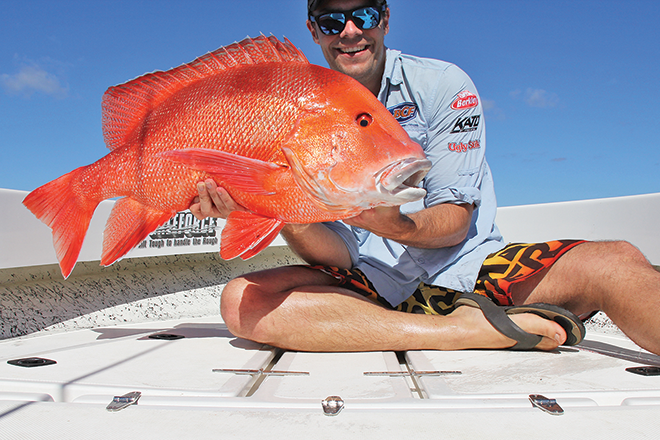 The author’s solo attempt at a photo.

FIRST things first, nothing is better than heading out with a few mates for an epic session of fishing, banter and general good times offshore.

However, getting a crew together is easier said than done, particularly given the timing of offshore missions is largely dictated by weather patterns, fish seasons and work commitments. On my last trip to Fraser Island, I found myself in a bit of a predicament. It was just prior to our big family Christmas on the island.

My in-laws are lucky enough to own a beach house at Orchid Beach, right next to their best family friends’ place, so every second Christmas we have a crew of 30 or 40 celebrating what is an awesome time of year. Knowing I’d be on the island over the festive period, I left my 5.5m Galeforce centre console there after our September trip.

In an attempt to beat the traffic, my wife Kate, our 10-month-old daughter and I drove up the island a day before Christmas Eve. Most of our crew remained in Brisbane, finishing their last day of work. It was only the three of us and Kate’s parents who made it up the island early. The forecast for Christmas Eve, everyone’s transit day, was absolutely glamorous – five to 10 knots of easterly breeze, tending northeast in the afternoon.

For anyone not sure what that means, it means go fishing offshore if you’re at Fraser Island. I was pumped when I asked my father-in-law to join me offshore the next day but was surprised when he declined as he had a heap of work to do to get the house in order for all his guests. So I was in a predicament.

As a younger man, I’d often fished up the creeks and estuaries on my own in my tinnie and loved every minute of it.

Those situations were very different to the prospect of beach launching, venturing out through the surf and fishing offshore of Fraser Island solo. Although within radio range of VMR Hervey Bay, the offshore waters east of Fraser Island are fairly remote in that you’re a fair way from help if something goes wrong.

A lot of factors were going through my head before I decided to grab the personal EPIRB, put it in my pocket and go fishing solo early on Christmas Eve morning. My father-in-law found half an hour to help me beach launch the boat and within a few minutes I’d navigated the surf and was keenly looking at options on my GPS. The nerves and anxiety I’d felt the night before about fishing solo suddenly subsided.

The ocean was no different to when I had others in the boat, the boat was the same, the conditions were good and hey, I was on Christmas holidays, in my boat at my favourite fishing destination! In fact, I was really positive about the day. I had no one else to worry about and could fish where I wanted, for as long as I wanted and when I wanted.

So I decided to chase the Holy Grail, heading to a few of my red emperor spots to see if they were home. Sure, it was about a 35km run, but the conditions were great and I was well rested and keen to catch a few. About an hour later, my eyes were glued to the sounder, hoping it would light up like the Christmas tree my father-in-law was no doubt assembling at about the same time.

To be honest, the areas I wanted to fish weren’t looking as promising as I’d hoped. There wasn’t a lot of bait present, but that isn’t unusual for the warmer months.
Big shows of fish were scarce as well, but I did manage to locate what looked to be a few nice fish sitting hard against a little rock ledge in around 55m of water.
It was about the best I could find, so I positioned the boat for a drift and deployed a big flesh bait.

As soon as it reached the bottom, it was hit hard by what seemed like a nice fish but not a monster, though I suspected it to be the right species. It was in fact two of the right species, a double of just-undersized red emperor, one hooked on each super-sharp snelled BKK 10/0 hook. A promising start. I retraced my steps and set up another drift, this time tinkering with my bait to hopefully entice a bigger fish. It worked!

Straight away I was connected to a solid red emperor that inhaled my bait and made a beeline for the reef. I managed to turn it and get it coming my way, which is half the battle with reds. After a couple of minutes of hard yakka, I had a beautiful red of about 10kg boatside and that’s when it got tricky.

I hadn’t really thought of how I’d get a good fish in the boat solo, given someone would normally be beside me sliding a net underneath any fish of reasonable size. I grabbed my hand gaff, backed off the drag and managed to pin the fish in the mouth. In one motion I put the rod in the holder with one hand and lifted the fish in with the gaff in the other.

Job done and what a feeling of satisfaction! The biggest disappointment was there was no one to high five and no one to take a photo! Just me, my red emperor and a whole lot of silence.

I carefully unhooked the fish, placed it in the Esky and got organised for another drift. The whole process was a lot slower on my own, particularly given I took the utmost care as a hook in my foot or a gaff incident wasn’t going to be pretty to deal with solo. It was at least 10 minutes before I was dropping another bait down and experiencing an almost instant replay.
Whack!

It was another good fish, and certainly another red emperor. This time the gaff was right by my side as a slightly bigger model hit the surface. ‘How good is this’ I thought to myself in silence as I managed to get this fish on board as well. I just sat on the Esky and stared at another red emperor heavier than 11kg.
These are fish I’ve chased for so long, and I’d caught two crackers in two drops on my own. I had to try to take a photo.

I set up my camera on my front console seat, set the timer and crouched down on the casting deck with my nice big red emperor. Then in the Esky it went.
The photo wasn’t great but I had to get back and do another drift. The next three drifts were carbon copies of the first three, with another three reds hooked and two of them landed.

If it wasn’t for a fairly large, greedy shark, I would have bagged out on red emperor within an hour. Bagged out on red emperor! Sorry, I’m just not sure if you realise how cool that sentence is. The night before, I’d been really close to pulling the pin on the trip. It was all just going to be too hard and too dangerous on my own.

Would the fish even bite? Would the weather be as good as it was meant to be? Would the current be slow enough to fish my red emperor spots? Yes, yes and yes were the answers but I wouldn’t have ever known if I’d stayed on the island. That’s probably the moral of the story here.

If you can go fishing, go fishing! Sure, there are always elements out of your control that will impact your day, but when it’s all said and done, y ou won’t catch anything from home. To be honest, this solo trip was probably the best offshore trip I’d ever done.

I’d only caught about eight fish in total but four of them were legal size models of the species I crave the most and I’d done it on my own, with no assistance.
Safety has to come first when you’re fishing solo, but if you take your time and think through what you’re doing there is actually very little pressure because you can fish the way you want to, following a plan with no one else to impact it.

A cracking day, and one I’ll never forget. I just wish I had better photos to remember it by!
Catch ya.

Chris grew up in southeast Queensland and chases everything from whiting and flathead to red emperor and snapper. Over the past few years Chris’s keenness for offshore reef fishing has grown into a passion. You might also catch Chris gracing your TV screens as a regular on Channel Seven’s Creek to Coast program.
Previous Lowrance HDS-12 Carbon sets new standard
Next Minn Kota Ultrex now available in Australia