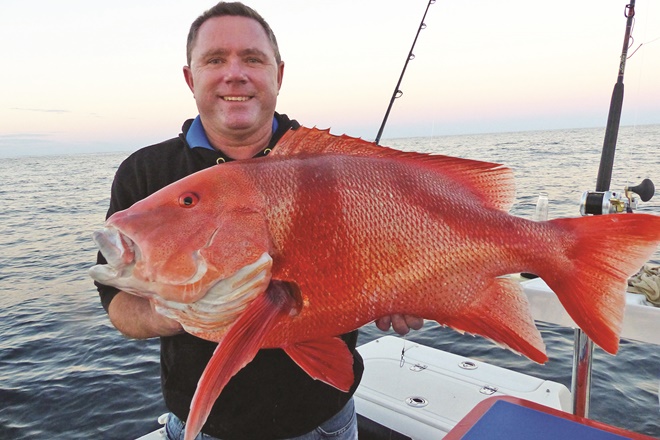 Dean with the first red of the trip.

AFTER a few trips off the Gold Coast with only a few snapper caught, the weather gods looked down on us with very good days.

We were watching for a decent weather window to head north out of Wide Bay Bar and hit the red emperor grounds off Fraser Island. As the weekend approached, we saw a run of light wind days for the Sunshine Coast and decided if it stayed settled we would give it a bash. Crawling through the traffic with a heap of other Gold Coast commuters that week, we could anticipate a good trip coming on, it just had that feel to it.

When the day finally came, we pulled into the Tin Can Bay boat ramp and could see it was already pretty busy on the water, with the carpark well over half full. It was the first run up north in my mate Dean’s Mustang powered by a newly acquired Honda 250hp. The boat was heavy, loaded up with three hefty blokes, 400 litres of fuel, 60 litres of water, ice, bait and food, but the smooth conditions made for a very easy exit of the bar as we headed 80km north off Fraser Island. The plan was to follow the lead of Greg Lamprecht and hit isolated pinnacles looking for the fish.

It was about 3pm when we arrived at the grounds and it didn’t take long to find great pinnacles with a fair show on them. We had jagged a lucky current, being slow enough to easily hit the bottom with a 12oz snapper lead. After landing a couple of parrotfish and a pearl perch, Dean got three or four bumps and pulled up solid on a good fish. Those tell-tale big bumps had us calling it for a red and we weren’t disappointed as the first red came over the side. We quickly reset our drift, hoping for a few more fish but got nothing, so moved on.

As the sun went down behind Fraser and the moon started to rise, we found the fishing heated up as more good size parrot came over the side but no more reds. That was until we hit a nice pinnacle, and as we drifted right over the top of it I could feel that tell-tale hit of a red starting to move away with the bait. As I lifted into the fish, the rod buckled over and those hellish head shakes again gave it away as a big red. Sharks were now our biggest enemy in the dark, but luckily a quality red popped up on the surface and was scooped safely into the net. A host of high fives among the crew was a given.

As the night wore on, we didn’t hook another red and only lost one fish to a shark. Anchoring for the night, I got to see the real advantage of having an anchor winch. We didn’t quite get the position right on the first set, and it was a simple task of pressing a button to lift the anchor and reset it. The Lonestar anchor winch worked flawlessly the whole trip and I reckon it won’t be long before Aquaholic finds one on it. As we settled into the night, we landed a few more parrot and called it quits about 11pm.

We woke to a bit of a sloppy sea that quickly settled down to an oil slick day, which was absolutely magnificent. The fishing was very slow, with only a few hussar coming over the side until around midday when Glenn hooked up big. This fish just didn’t want to give in, but after pumping and winding and hoping the taxman didn’t show up, a solid 13kg red was slipped into the net and hauled in the boat. There were celebrations all round and we hoped we would pick up another as we continued our drift.

But even after restarting over the same show, that would be the last red we would get for the trip. Nonetheless, we were very happy. We worked hard through the afternoon for more parrot and some bludger trevally that attracted two of the biggest sharks I’ve seen off Fraser, so we quickly moved to get away from them. We were discussing the trip so far when Glenn’s rod again buckled and he was on to another good fish. Initially we called it for a red but it gave a really good account of itself and I began thinking maybe even a mackerel by the way it was fighting. Soon enough, a big green jobfish came over the side of the boat, much to Glen’s delight as it was his first jobby and one more fish ticked off his bucket list.

As the moon started to rise, the pickers moved in and we managed a few more parrot but the wind started to pick up early so we set anchor and hit the sack around 9pm. It was a fairly rock and roll night as the northerly picked up to around 15 knots. As morning broke, we saw we had moved a bit off our mark. We reset the anchor and while having some brekky my rod doubled over on a good fish. I managed to turn its head just as the line went limp.

On inspection, I must have got a nick in my braid just above the swivel. After a quick rerig I was on again and called it for a red. As I got colour I was still thinking red emperor, and while it was red, it was instead a solid snapper that came over the side. As we hopped from rock to rock heading south to the bar, we continued to pick up a mixed bag of parrot and redthroat emperor. Crossing back in was as easy as heading out, with a flat bar.

A log off with Coast Guard Tin Can Bay and a quick shower saw us on our way home. It was a great trip and although we are still novices at red fishing, we plan to nail it in the not-too-distant future and load the boat with reds. Dean was suitably impressed with the fuel economy of the Honda 250hp over his previous Honda 225hp. When Silver Service Marine fitted the engine, the team told Dean he’d get good fuel economy, but we didn’t expect to get under 1:1 considering the weight we were carrying. In the end, we were pleasantly surprised to have used 285 litres for the 330km travelled.

‘Til next month, smoking drags to you all.

Heath has been fishing since the age of three and grew up fishing the mighty Georges and Hawkesbury rivers.
Previous Lockout stopped: NSW Government drops plans for fishing lockouts
Next Bowen Family Fishing Classic this weekend!