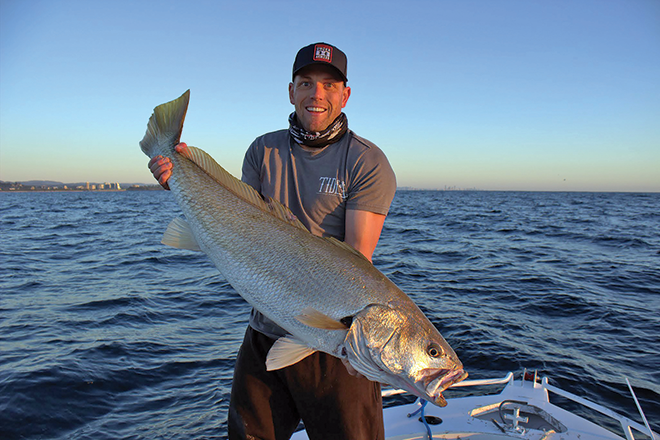 JEWFISH, or mulloway as they are commonly known, are special fish to tick off the bucket list.

Many of us spend countless hours and evenings chasing the elusive silver ghosts, often failing miserably in the beginning (or maybe it was just me?). I hope in this article I can give you a head start to help you land your first jewfish.

I will never forget my first. Several years ago, I was jigging for flathead in the Gold Coast Seaway with a 4” shad-style soft plastic in the eddy of the north wall. I hooked up on the light baitcast gear, not expecting the powerful runs and sheer speed I encountered.

With my thumb on the spool, I managed to drag the fish away from the rocks and it turned out to be my first jewfish – a 5kg schoolie. It was a modest fish as far as jewfish go, however the silver gleam and impressive sight coming up from the bottom cannot be forgotten.

Since then, I’ve always enjoyed catching jewfish. The powerful runs and violent headshakes of bigger fish are very addictive, especially if you manage to get them on lighter gear.

Let’s start with how to target jewfish inshore, remembering that the Queensland minimum size is 75cm with a limit of two in possession. It is quite common to catch jewies under this limit, so remember to lay them on a brag mat before putting them in the icebox.

Jewfish like to hold up in deeper areas, so you want to be targeting spots such as the pipeline that runs across the Seaway, the hole on the north wall, the mouth of Jumpinpin Bar, river bends with deep holes, highway bridges with depths of 6m-plus and other deep back-eddies in the rivers.

The second key is bait. If you find these deep areas holding bait, the jewfish will not be far away. They won’t waste energy chasing prey, so you will either have to target them on the tide changes or in an eddy. The best times to chase jewies are always the tide changes, or the start of the run-out tide, especially if the tide change coincides with dawn or dusk.

Jewfish are suckers for live baits and large flesh baits. When fishing inshore, live yellowtail scad, poddy mullet, big herring and even live whiting (legal of course) are ideal baits. A good tip is to duck outside to the close bait reefs and load up on yakkas before fishing the seaway entrance.

Using the larger baits helps keep the pickers at bay, ensuring you only catch quality fish. Jewfish have big lateral lines that run down the side of their body, which really helps them zero in on prey in the low-light periods. Jewies will almost always be on the bottom, so there is no point trying to use the lightest possible rig when bait fishing.

The only exception is when they are chasing sea mullet schools on the surface after they come into the estuary in winter. I suggest a heavier sinker would be better than lighter because you want to drop that live or flesh bait to the bottom and have it stay there. I often just bring it up a metre from the bottom and anchor it there. fishing gold coast

The heavier sinker will ensure your live bait doesn’t run rings around the boat, causing foul-ups with other lines. For inshore tackle, a medium spin or heavy baitcast reel with a rod in the 8-20lb range will cover most inshore bait fishing for jew.

There are occasions in winter where big jew can be caught inshore, so if you are at anchor I’d suggest heavier gear to avoid bust-offs. Just make sure your drag is smooth because the fish will be sure to test it out.

Offshore jewfish are one of my favourite fish to chase, mostly because I’m lazy and can anchor on a good spot, drop out large live baits and sit back waiting for the fish to come to me. I’ve had a lot of success catching jew while snapper fishing and drifting with a live bait or octopus-style jig in the rod holder at the back of the boat just up off the bottom.

It can be a nice bonus while snapper fishing to pick up a 10kg jew without a lot of extra effort.  Just remember to work out how many winds of line on your reel equates to how many metres, and that way you can know how far off the bottom the jig or live bait is.

There is nothing worse than drifting over the pinnacle and snagging onto it, losing your gear and wasting fishing time. To target jewfish offshore, I would suggest fishing late afternoon into night with live baits. Find good structure that is holding bait and anchor with a mixture of live bait and big strip baits of mullet or tuna and wait it out.

Off the Gold Coast, often as soon as it gets dark you will find live baits are mauled by smaller trag jew, which can be a real pain. The only solution here is to put a small trag out as bait, or get your hands on bigger baits such as large live tailor to keep the trag at bay.

My favourite baits offshore are pike, slimy mackerel, tailor and yellowtail, in that order. I don’t know what it is, but there is always something exciting about deploying a live pike… you just know it’s going to get hammered! For a live offshore bait rig, I like to run two snelled Gamakatsu Octopus 6/0 hooks on 60lb mono with a running ball sinker to the top hook and rolling ball swivel to the main line.

If I’m using an octopus-style jig and I intend to put it in the rod holder I will use a 200g jig to make sure it is reasonably vertical below the boat, letting the boat action from the swell impart action on the lure. It is important to get offshore as early as possible and beat the rush on the close reefs for the first few drifts.

Often if you get out in the dark you can get two or three drifts on close reefs and nail a good fish before all the boats turn up. Boat traffic doesn’t necessarily spook jew but it can make it hard to get a nice drift line when a horde of boats is around. fishing gold coast

Jewfish are quite nice fish to eat, and I would rate them above teraglin but below snapper. However, it can be a case of too small and they are not much good and too big and they can contain worms, which are not harmful but not very pleasant to know you’re eating. I often season and barbecue fillets, sometimes marinating them in olive oil, soy sauce and honey.

July and August are perfect times for targeting jewies. The bigger models will move into the rivers chasing mullet and when it’s too windy offshore it can be a great opportunity to look for jewfish in the river mouths during a late afternoon/night session. Pack the rods, load some coffee and don the Ugg Boots for great winter action! fishing gold coast fishing gold coast

For more tips on jew and other trophy targets on the Gold Coast, click here!

Jason is an experienced Gold Coast-based fisho who loves nothing more than sneaking offshore to chase trophy snapper or getting into the estuaries to target jacks and more from his kayak.
Previous New Bigfish Gear BFMaxflow REPEL Boar
Next Tips for kayak safety in winter