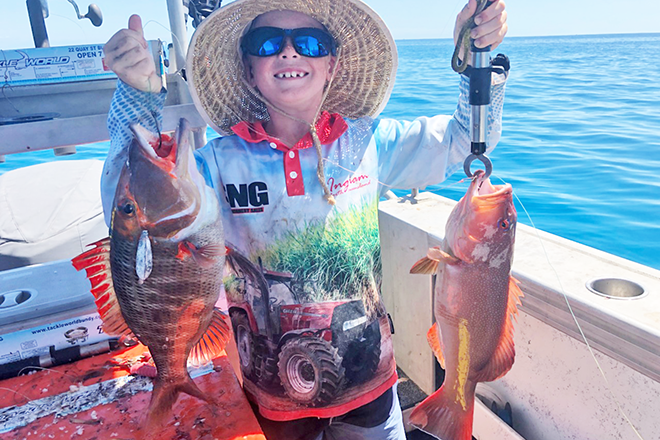 BUNDABERG OFFSHORE
As the days roll around to the weekend, the current forecast for the Bundaberg area is looking great. However, it pays to check the up-to-date weather forecast or even check with the local VMR before heading out. We have perfect tides for the weekend, so if the weather permits, places like the gutters will be well worth a look for the smaller boats, or the Warregoes or Herald Patches if you have a bigger boat.

THE BURNETT RIVER
The Burnett River still continues to produce some of the best fishing our area has to offer, with plenty of school mackerel being caught down around the river mouth. Trolling small diving Minnows such as the Bagley’s Rumble B has been deadly on the schoolies. All of the rocky areas continue to produce plenty of bream and a few mangrove jacks. The sand bars are still producing plenty of flathead and whiting. Some of the channel drop-offs are producing some big grunter and still the odd salmon. Some of the deeper holes have produced a few big jack and jew fish with most of these being caught on soft vibes lures. The past week has seen a few mud crabs getting about and could be well worth your efforts as the tides build.

ELLIOTT RIVER
The trusty Elliott River has also been fishing well with plenty of bread and butter species being caught. The Elliott always fishes well on the run-in tides and plenty of large sand whiting and gar fish have been caught. There is also plenty of flathead, jacks, cod and a few grunter being caught further upstream. Coonarr Beach has been producing plenty of whiting and dart off the beach front, so this is a great option if you’re keen for a beach outing.

BAFFLE CREEK AND KOLAN RIVER
Both the Baffle and the Kolan systems have really turned it on in the past few weeks with some quality fish being caught. Mangrove jacks and big grunter have been caught in good numbers with live-baiting working well, with live poddy mullet or prawns being favoured. Both river mouths have produced plenty of sand whiting and flathead with the run-in tide over the sand flats just inside the mouth as the place to be.

LAKE GREGORY
There has been plenty of bass caught out in the lake this past week. Although most have been small, to 30cm there has been a few over 50cm caught with some persistence. Larger bass lures such as the Jackall TN70 or Squirrel have been the best on the bigger bass.

LAKE MONDURAN
The past few weeks the barra in Lake Monduran have really been on the chew and this week saw plenty more barra caught. If you have a change of plans, how about trying Lake Monduran for the $15,000 barra? You can register to enter the Bundaberg Toyota Golden Barra competition and try your luck at landing either the Golden, White or Silver barra. The competition runs until the 31st January, 2019 and you can find all the info and registration form on the website at https://www.goldenbarra.com.au/