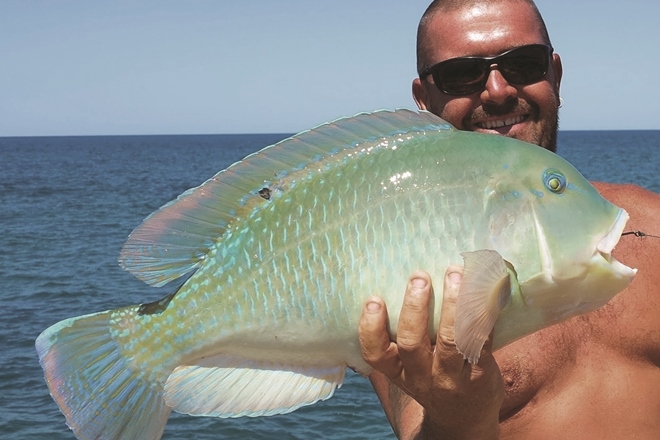 Target tuskfish with the right bait.

PEEL Island is inhabited by a variety of sea life including dugongs, turtles and dolphins, jellyfish following the currents and, of course, plenty of fish and the odd shark.

The island is a popular overnight and weekend anchorage for vessels, and Horseshoe Bay on the southern side is a great spot for sheltering from northerly wind, particularly during summer. If you plan to camp on Peel Island, now Teerk Roo Ra National Park, you will need to contact and book with the National Parks and Forests website.

In its early days Peel Island was a leper colony, and the remnants and old jetty in the western shallows are protected as part of the heritage site. From the Spit to the top northwest corner is a green zone.

I work on the principle that once you reach the 2m contour, the green zone commences. Another green zone is further north on the maze of sandbanks where the Amity Banks are located, as well as a couple of small ones in the Rainbow Channel. The island is fed by the channel, which stretches all the way up to Amity Point township and finishes near One Mile.

Peel Island and Harry Atkinson Artificial Reef are the two most-fished areas in Moreton Bay, and on weekends it’s often hard to find space to fish due to the number of boats. The Rous Channel also has an effect on currents around the northern side of Peel.

The Rous lies about 5km from Manly and 2km northwest of Amity. The reefs around Peel Island hold a variety of fish from snapper to grass sweetlip, spangled emperor, cod, tuskfish, trevally and squid.

Bream, the odd flathead and whiting can be found from the Platypus wreck across to Bird Island. Peel Island is also known to produce the occasional coral trout, nannygai, parrotfish and even juvenile red emperor. If you have time and are after a feed of whiting, head north along the banks to the mouth of the Rous and Fishermans Gutter or outside the green zone on Amity Banks. Fish the weed beds because a feed of diver whiting is usually available, along with good squid.

The deeper water around Goat Island is one of my favorite jewfish areas and, though it sporadically holds reef species, the current can get strong. While the Rainbow weed beds hold grassies, spangled, tuskfish and squid as well as pelagics off Amity Point, the waters north of Peel towards Harrys carry school mackerel (doggies), the odd spotted mackerel, mack tuna and quite often longtail tuna.

Myora Reef also holds spangled emperor at times. The houseboat wreck at 27.30.348; 153.19.303 lies southwest of Peel Island, and though it’s worth the effort, fishing on top of the wreck will end in a multitude of snags because a trawl net lies over the top of it, so it pays to fish to one side. This area, Hole in the Wall and around the beacon at South West Rocks fish best on the run-in tide.

If intending to fish Rainbow Channel, beware of the strong currents that inundate this channel. It is the highway from South Passage Bar for large sharks and pelagics moving back and forth. Birds give away most of the bait ball positions but trolling the edge of both sides of the channel with spoon lures, paravane boards or Halco Laser Pro 160/190 lures can result in a pelagic hook-up and occasionally kingfish.

At times, structure such as the rock walls near One Mile and Amity Point, and the pylons around Dunwich, will produce good-sized bream and grunter. The waters from Peel across to Green Island can get very rough, especially with a strong northerly or southerly blowing. The ramps at Raby Bay and Victoria Point offer the option of running with a northerly or punching into a southerly rather than travelling sideways across to Green.

Two popular ways of fishing Peel Island’s drop-offs are anchoring with a berley trail and casting soft plastics and lures toward the drop-offs while drifting. It’s not hard to catch a keeper if you put in the time and effort, and the weather and tides stay on-side. I predominantly target blackspot tuskfish at Peel. If these fish are not playing the game, I’ll chase squire and sweetlip.

Or I’ll head up the Rainbow Channel and target a catch along the eastern drop-offs. The only baits I use are rock crabs and legal size sand whiting on very heavy rigs. This is where a downrigger comes in handy for fighting the strong currents. Another option is to use a single paternoster rig.

The key to catching fish on bait around Peel Island, especially snapper, sweetlip and the occasional moses perch, is to fish as light as possible because these fish have seen plenty of boats and have had loads of bait thrown at them. Fishing with soft plastics at night generally works on two principles: silhouette and sound. First, use larger-sized plastics such as 7” in a dark colour because the bigger lures make better silhouettes against moon and starlight.

Second, noisy vibration lures similar to Jackall TN60s are easy for fish to find due to the sheer racket they generate. Both methods work to get the attention of snapper, especially the bigger variety on dark nights.

Care must be taken when fishing these shallow reefs at night, as a dropping tide and shallow reefs can catch you out. If anchoring for a night’s sleep, head to the relative safety of Myora or Horseshoe Bay. During winter, anchoring near the cross-channel marker at the bottom of Goat Island and floating a live bait in deeper water can attract reasonable-sized jewfish and tailor.

Fishing the shallows from the Bluff across to South West Rocks can entice good-sized flathead, and often whiting at quiet traffic times during summer when less boats are at anchor. The attraction of Peel Island is it produces a variety of species, often more than other islands in the bay. Sounding near the artificial reef, coffee rock and wrecks, you can find nannygai around 35-45cm in size.

When fishing for snapper, I recommend using berley. I’ve caught legal snapper and found my berley in their stomach numerous times, and the best berley is what you’re using for bait. People worry about overfeeding snapper, but with how much these fish can hold in their stomachs and the amount of small fish around, I don’t think it’s possible to overfeed your quarry.

Berley does attract unwanted species but I don’t mind this because it means the berley is working. For a successful trip, I recommend fishing this island during the week when fewer boats and jet skis are around. When considering where and what time to fish, remember it all comes down to wind and tides.

I prefer outgoing tides in the northern shallows and find afternoon tides best. The place to target is not on the top of the shallow grounds, but on the drop-offs, as that’s where the fish will end up as the tide recedes.

Trying to fish on top of the shallows with bait is too hard because you’ll end up losing loads of gear due to the number of snags. For night fishing, I prefer the waning crescent moon. My theory is the dish-shaped moon holds fish, but once it tips over it empties the fish out, making them harder to find.

So, what time of year is best? I have caught snapper all year round in the bay, big and small, and though catches improve in cooler conditions, summer produces some decent fish.