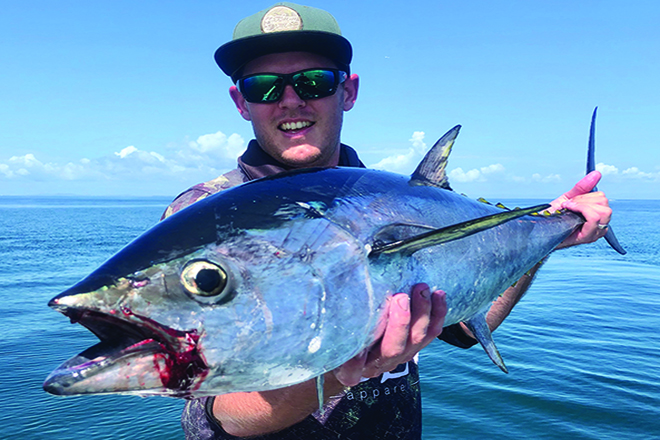 Gavin Springate with a solid longtail tuna from Moreton Bay.

The fresh flush has set up fishing for autumn

WELL I was talking about rain and pretty much every creek and river from Hervey Bay to the NSW border was running after the fresh flush in March.

It’s great news because the fresh flush was much needed to improve fishing, and the majority of dams have seen good increases or are overflowing.

In the short term, fishing options will be restricted to certain areas but this rain will be beneficial for the fishing in autumn and winter.

Hopefully they stay around for a couple of months because surface-feeding schools of spotted mackerel have been close to nonexistent.

While not regarded as highly as mackerel for their eating quality, they will scratch the itch of the Moreton Bay pelagic angler.

The middle bay areas have been the most productive, with reports from the Sandhills on Moreton Island, north of Mud Island, the four beacons and to the north along Moreton.

Moreton Bay anglers get to enjoy quality longtail tuna, with the majority of fish in the 10-15kg bracket.

At this size they are prized sportfish.

Early reports of mack tuna are of smaller fish in the 2-4kg range but larger fish are likely to emerge during autumn.the fresh flush

Plenty of bait schools are throughout the bay, most comprising small stuff that can make tempting tuna on lures difficult at times, especially mack tuna.

Longtails are often less picky and will crash a stickbait or soft plastic worked near the surface through surface-feeding schools.the fresh flush

Heavy spin gear of 30-50lb is the tackle you want to be holding when you hook a 15kg longtail, so you aren’t fighting them for over half an hour with your arms feeling like they are going to fall off.

Locating them, positioning the boat and getting the hook-up is one thing, but landing a tuna without being taxed by one of the many large bull sharks that follow boats around these days is another.

These bull sharks can stalk the boat and attack a hooked tuna in packs of up to six 2m-plus sharks.the fresh flush

My advice is: don’t fall in, use the heaviest gear possible and drive away from areas that have sharks in an attempt to find tuna schools that don’t have sharks nearby.

Jewies love a bit of run-off water and will be worth chasing this month.

As they clean up, areas like Harry Atkinson Artificial Reef, the mouth of the Brisbane River, Jumpinpin Bar and the Southport Seaway will be good places to start.

Once the water clears, jewfish will move further down Moreton Bay or back up the estuaries, but until then, open deeper structures will be worth focusing on.

Prawn-imitation plastics will be my first option for trying to tempt jewfish this month, because they can be pretty focused on this highly prevalent food source in autumn.the fresh flush

Try to get a tide change in your fishing session, especially on big tides, but don’t be locked into thinking jew will only bite on the change.

Expect to see sharks hanging around the jew as well, but if you’re lucky they will be more focused on tuna.

For this reason, shelve the light gear and get them in quick.

This combo can have a 90cm jew to the boat in less than a minute, where I can keep it for a feed or release it in good condition.

Snapper were pretty thin at the time of writing but sweetlip have made up for the lack of red fish.

The flush could certainly help those who like to target bay snapper.

Again, I would focus out wider when the weather allows and work back closer when the water clears.the fresh flush

Having said that, like most fish, snapper will feed in dirty water if the food and cover is there, so don’t rule out fishing shallow reefs that look too dirty.

Lures including hard-bodies will be worth a try if fishing dirty water because the vibration will be easier for the fish to home in on.

In deeper water, try the usual plastics, vibes and jigs up-current of structure.

Drifting down to the structure from well ahead will present the lure more naturally and ensure better success if the fish are being tricky.

That wraps things up, so I hope summer’s fresh flush has set up fishing for you this autumn. the fresh flush

Peter Herbst has 30 years of fishing experience around SE QLD. Everything from whiting to marlin has been a target at some stage but these days Peter enjoys nothing more than casting lures.
Previous Great conditions for catching a feed of fish on Gold Coast
Next Fishing Peel Island and surrounds