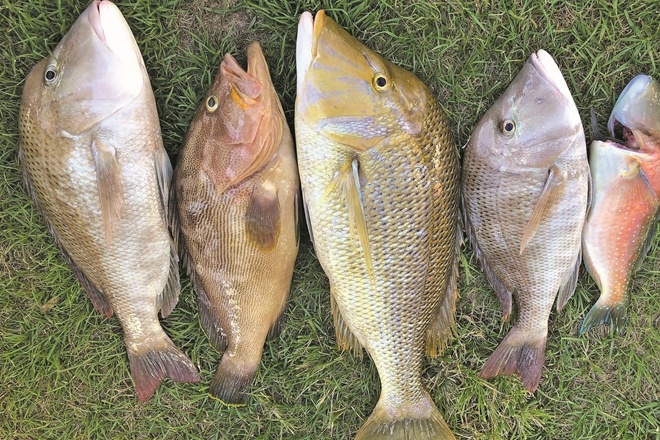 Mixed bags are available if you put the effort in.

March madness in the Bay

WELL, the spotted mackerel have shown up in reasonable numbers and have been found mainly in the paddock, with bird activity showing the way, especially from the sandhills across to the measured mile. While doggy mackerel are around in good numbers and a fair few were trolling up using paravanes in the Rous Channel and near the Amity Banks drop-offs, plus the occasional school in the Rainbow Channel. Madness Bay

The beacons are also producing doggies by jigging the base of the beacons, either with whole pillies or silver spoons, the best beacons are those holding bait in the eddies. The Pearl Channel has been producing doggies as well, using paravanes trolled along the drop-offs – there have even been schools of doggies south of Peel Island around Pelican Banks.Madness Bay

Plenty of mack tuna can be found from the bottom of the Pearl to the top of Peel, the odd school has also shown up in the mouth of the river. Once again birds are you best shot in locating them.

Longtails have been caught from the top of Peel up to the Four Beacons and across to the bottom entrance of the Pearl Channel or trolling the sides of the shipping channel. The top end of the Pearl to the bottom of Bribie Island has also seen the chance school show up. There have been plenty of threadfin salmon in the river, from the container terminals up to Breakfast Creek, along with the odd jewfish – mainly from the Sir Leo Hielscher Bridges to the mouth.Madness Bay

There have also been jew caught at the top of Macleay Island, especially at night. Copious gold spot and estuary cod have been in the shallow reefs in the bay, as well as the rock wall in the river, with the occasional trevally. Squire have shown up in the shallows, the reef drop-offs, artificial reefs and the container terminals, and a few 60cm plus models have been caught in these areas. The Scarborough Reef has produced squire and this species have even been caught in the Bribie Passage.

Ample grass sweetlip have been found around the drop-offs and the rubble areas on top of them, particularly the Wellington Point drop-offs and the inside and bay side of Green Island. The isolated coffee rock at the top end of the shipping channel has been producing good numbers of grassies, often better than the bay – if you sound around from Curtin Artificial Reef past Bulwer and further north where the shipping channel heads north to Caloundra.

With the hot humid days, we’ve had the best conditions to target this species, and fresh bait – especially squid heads – are producing the better catches. The odd spangled emperor has shown up when targeting grassies, along with moses perch. There have been a few unusual catches in the shipping channel lately, from red emperor – which aren’t legal – to chainman fish, and cobia off the beacons near Bulwer and around the four beacons isolated structure.Madness Bay

Isolated structure off the western side of Peel, not far from the West Peel Artificial Reef, has also produced red emperor and nannygai. You’ll find bream up in the shallows at high tide and in close around the eastern side of Mud Island, and flathead in close again around Mud, the creeks near south Wynnum, the Pine River and Macleay Island south around the mangroves.

Squid have been in abundance from the weed bed in the Rous and Fishermans Gutter, the front of the rock wall in the river and in close around Mud, or the boat harbour rock walls and shorelines for land-based fishos.

If you want to target blackspot tuskfish head north to the Bulwer drop-offs, using crab as bait and reasonably heavy gear – once you find a good drop, anchor up. The top of Peel and the eastern side of the Rainbow north of the Myora anchorage has also been producing the occasional blackspot.Madness Bay

The river has produced a diverse range of species, with snapper, threadies, jew, bream, mack tuna, squid on the rock wall and cod, and there’ve been nice mangrove jack caught too, particularly using live bait species. Just goes to show, you don’t have to travel far to catch a good feed.

Mud crabs are around in good numbers and once again the river and creeks south of Manly have held a feed. Remember to check your pots after an overnight soak, as too many bucks in the pot will start them fighting, and it pays to release anything not legal. The bay has good numbers of sand crabs – also known as blue swimmer crabs – especially from the Pearl Channel across to Shorncliffe.Madness Bay

Of course, the best times to fish the bay are sunup and in the evening with a good rising tide, as well as the few hours on the turn of the tide. Best of luck in your ventures as there are a lot of boats out there targeting pelagics – and why wouldn’t you, this is the best time of the year for both spotties and doggies. If targeting longtail tuna, you have to put in the miles and even then you could dip out.

Previous Fisher fined for hiding crabs
Next Prepare for Plan B