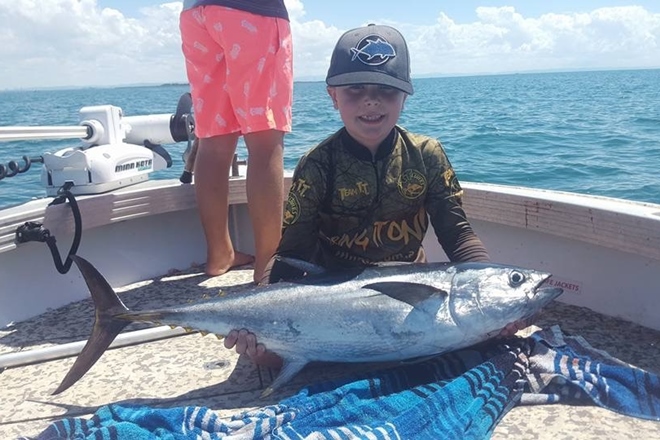 Corey with a longtail that smashed a soft plastic right at the boat. It’s great to see young kids getting into the action.

WOW, what a tuna season we are having so far.

We’ve enjoyed some of the craziest fishing I have ever witnessed. Monster schools of longtail tuna have swarmed into Moreton Bay and a number of the schools need to be seen to be believed. There is nothing quite like the sight of over 100 tuna smashing the surface simultaneously. I would not want to be a baitfish in Moreton Bay right now! The one downside to so many fish is sharks.
Some days there seems to be just as many sharks as tuna. During one recent session we were sharked on eight out of 13 hook-ups. Not good odds! If you are finding sharks a problem, it’s best to look for another tuna school and try your luck there, hopefully without the taxmen present.

The fish are spread from Hope Banks across to Goat Island and as far north as Cowan Cowan on Moreton Island. They may go further north but there’s been so many fish I haven’t bothered looking any further. Because we are right in the middle of a cracking season, in this edition I will give you a full run-through on what I do, from trip preparation to hooking and landing a Moreton Bay longtail tuna.

First, the night before a trip I will organise what gear I’m going to take the following day. I go over every reel to ensure everything is as it should be – it’s very important to inspect those line roller bearings. You will burn through braid very quickly if one fails and a good size tuna is ripping line off the reel.

I replace my leaders every trip without fail. Casting stickbaits will take quite a bit of the stretch out of your leader. A lot of force is involved in every cast, let alone once you hook up. It doesn’t take long to tie on a new leader before each trip to give yourself the best chance of landing that fish of a lifetime. I always use the FG knot when tying braid to leader. I have found it quick and easy to tie with excellent holding strength. Multiple videos can be found on YouTube showing several ways of tying the FG knot.


I have seen so many different versions – some involving tying spider web-like setups around your fingers to hold the braid steady. I’ve found instead of placing the braid in your mouth to hold it, simply tie a hook onto the braid and hook it to your shirt pocket. The most important part of tying this knot is keeping steady pressure on the braid while wrapping the leader. My method allows for good tension and two hands to work with.

Running single hooks on my stickbaits has considerably reduced the numbers of dropped fish. I’ve found trebles tend to wear a large hole in the fish’s mouth, causing a premature release. Singles not only stay in the fish better, they make handling and releasing the fish a lot simpler and safer for all involved. With this in mind, I go over my stickbaits to ensure all hooks are sharp and replaced as required and any new lures have the trebles removed and singles fitted. I then simply tie my lure on with a loop knot and pre-set my reels’ drags.

To set the drag, I connect the lure to the front of the boat and then tighten the drag to a suitable level for the rod and line being used. I then give it a good test with some hard and sharp pulls on the rod to make sure my knots are up to scratch. Once on the water, you’ll know all your gear is ready to go and it’s time to find the fish.

Reports from magazines including the one you’re reading and online forums, Facebook and so on are very helpful resources to peruse before heading out. If you’re lucky enough to have a few mates who are on the water frequently, even if they are chasing other species, it’s good to ask them to keep their eyes open for any tuna. The more up to date your information is, the easier and more successful your trip will be.

Keep one eye on the sky and one on your sounder at all times because the birds will nearly always point you in the right direction and your sounder will confirm if you are on the bait schools. Once you have both birds in the sky and bait on the sounder, you know you’re two-thirds of the way to catching tuna. So now you have found the tuna, how do you get close enough without spooking them? A few key points will help here.

Constant noise is better than variable noise. At times, driving in and switching off your outboard will send the fish deep quicker than a faster, slightly noisier approach. The right approach speed will be different for every boat and outboard combination; there’s no one key fits all. Trial and error will be required.

The next question is, which way to approach the school? I see so many people get overexcited and drive right over the top of the tuna school or approach quietly from the rear of the school. Tuna will have spent a lot of time and energy balling the bait up and they will rarely turn around to eat the fake baitfish we’re throwing if it’s swimming in the opposite direction to the rest of the bait. If your two favourite, identical coffee shops were across the street from each other, would you cross to the shop on the other side of the road?

As a general rule, tuna will feed into the strongest opposing force. This will either be the wind or on those magical glassed-out days, the tide. Both can be used to your advantage. The wind will aid in longer casts and the tide will allow you to drift into the school. Trying to land your lure just behind a feeding school – not on top of it – will help you get a hit sooner. Lures make a lot of noise when they land on the water, so if the fish are in a spooky mood, this is the best method.

I use multiple retrieve types and the one that is by far the most successful is a slow twitch, twitch, pause. While skipping your stickbait flat-out across the surface may look amazing, you will get more hook-ups by keeping the lure in the fish’s face longer. Once a tuna smashes your stickbait off the surface and the drag starts screaming, all the fun begins. In all the excitement, don’t forget to set the hook.

Give a good strike after hook-up to really sink the hook and then allow the fish to have a decent first run and burn up energy. After the fish has taken a solid run, get back on top of it by driving the boat to chase it if you have a second person on board. If you’re fishing solo, you’ll have to work it back with the rod. The fish will soon go deep as it tires, doing those back-breaking tuna circles. If you can upset the fish’s rhythm by pulling it back in the opposite direction to its circle, you can shorten the fight time considerably.

Because I tend to release most of my fish, I use a large barra net rather than a gaff once I have the fish at the boat. This works well with another person on board, but if I’m on my own I tend to grab the tail and a handful of leader and lift the tuna over the side. If you keep a tuna for a feed, it will need to be bled correctly and iced quickly. Tuna are very good eating and always enjoyed in our household. The smaller 10kg and under fish are a lot easier to look after correctly and you won’t end up wasting so much meat. This season is really firing and turning out to be one of the best in a long time.

Grab some stickbaits and a suitable rod and reel combo and get out on beautiful Moreton Bay to catch one of the best sportfish going around. There’s nothing better than catching big fish on surface lures. It’s awesome to watch and very addictive.