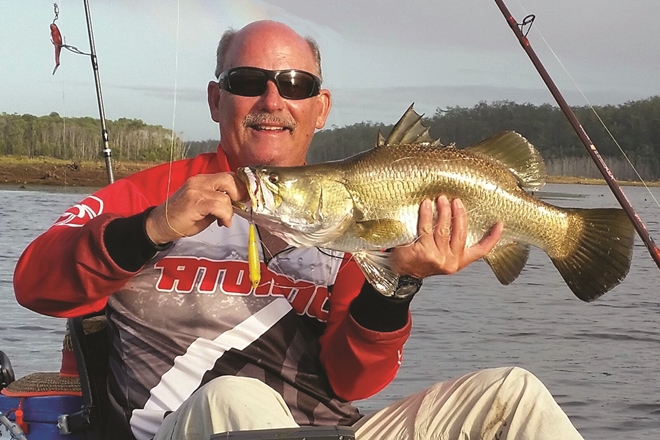 The author with a topwater-caught barra.

DURING the recent warm weather, three mates and I camped at Lake Lenthall near Maryborough for a few days to chase the stocked barramundi and bass.

The lake is an easy three-hour drive up the Bruce Highway from Brisbane. Our camping setup consists of a gazebo, swags and basic cooking gear, which is all you need for an enjoyable couple of days. The camping ground is quite spacious, with easy access to the water’s edge, clean toilets and cold shower amenities. You can camp right on the water’s edge and leave your boat or kayak on the shore and ready for quick access whenever you want to go fishing. Because it was midweek, only one other campsite was occupied, so we basically had the dam to ourselves.

We arrived late morning with two Hobie kayaks and one 4.3m tinnie and had our camp set up by 1pm, giving us time to sit down and have some quick refreshments while discussing our plans for the afternoon fishing session. The wind was blowing from the southeast – the opposite to the month previous when we’d visited the dam on the build-up to a full moon. So it was a new ballgame to find the bait and where the fish were biting.

By mid-afternoon I launched my Hobie Outback and started making my way up one of the feeder creeks, working a soft plastic. I was rewarded with a small Lake Lenthall barra late in the day. It was only 55cm long, which is about the average size for barra in the dam, though bigger fish are there to be found if you’re lucky. This fish put up a good fight on 20lb Unitika braid and 40lb leader. Using 40lb leader may seem like overkill but even a small barra can make short work of anything less with its rough mouth and especially if it jumps throughout the fight. 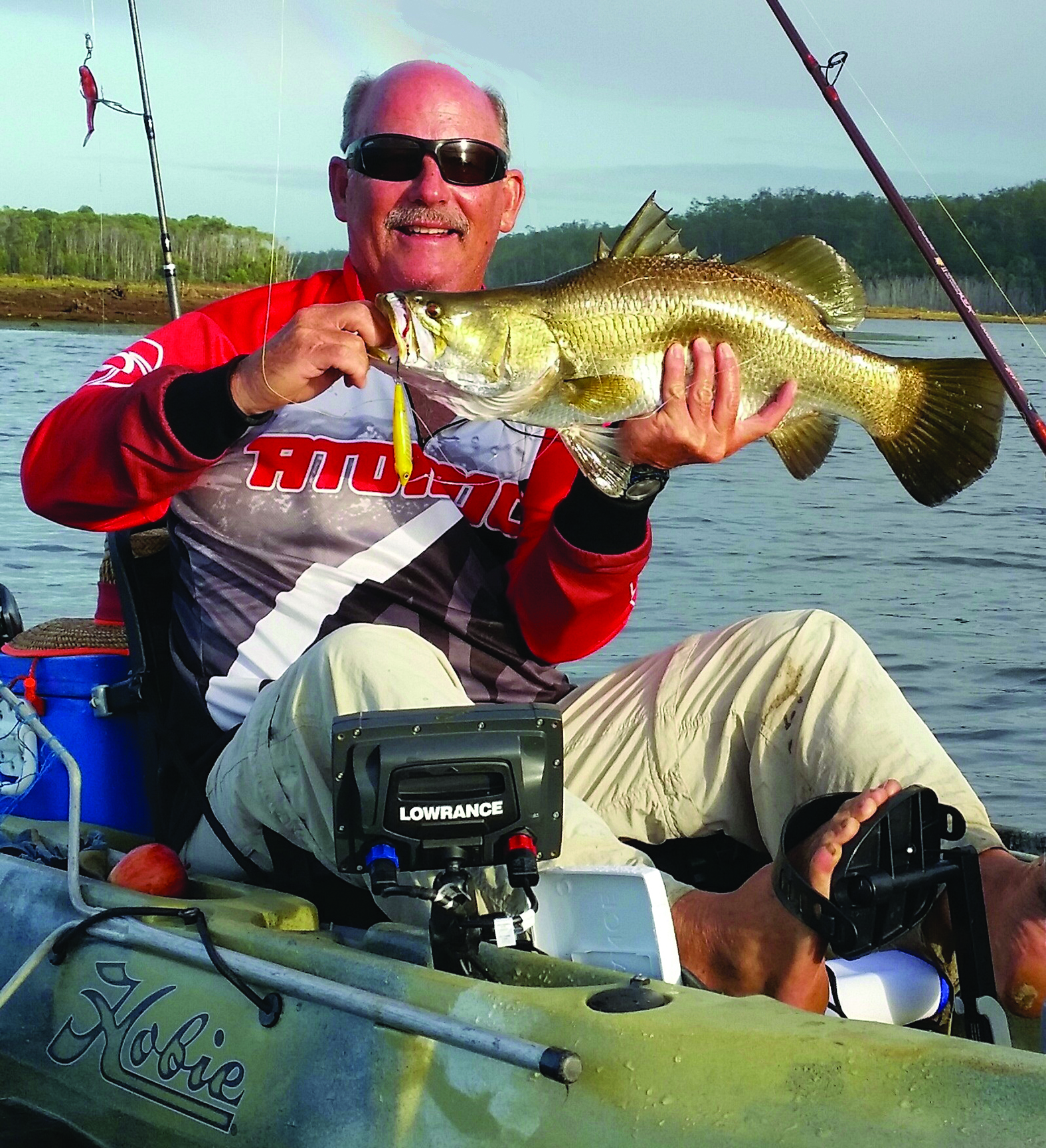 I worked my way back to camp just after dark using a topwater approach but failed to entice any further interest. The others didn’t have any luck in the afternoon session but we were all keen to chase them early the next morning. Everyone was up and on the water pre-dawn the next morning. We were keen to make the most of the low-light period because this had proven to be the best bite time during the previous trip.

After 30 minutes of fruitless casting for me and only one fish for Alex (who was in the boat), I was a little disheartened and reassessed my plan. I decided to ‘follow the wind’ and headed to an area where the slight breeze was pushing onto the shoreline of two small islands. I was immediately rewarded with a 61cm Lake Lenthall barra. A quick photo and release saw me fishing again in short time and I had another three hits and two hook-ups but both fish jumped off.

Fishing topwater quite often results in many dropped fish because barra are able to throw the hooks when they jump. Fishing soft plastics usually results in a higher percentage of landed fish. It was amazing how a change in area had made such a difference. After the bite quietened, I decided to make a small move to another area of windy shoreline. Again, it didn’t take long to get a hit on a Megabass Dog-X surface lure, but this time it was from a small 27cm bass, which was certainly a bit different to the take of the barra.

Quickly released, on the next cast I hooked a 60cm barra that put up a good fight. I eventually got it into the kayak after it had become tangled in the weed. I was lucky to land this fish because I’d neglected to change my hooks to Gamakatsu trebles and the smaller standard trebles were all bent out of shape – lesson learnt! Once the barra was released, I quickly changed over to a 95mm Bassday Sugapen (with upgraded Gamakatsu hooks) and was lucky enough to land another 58cm barra, making it three fish in three casts. Unfortunately, after that burst they again went quiet.

I kept working along the shallow edge with the wind, which was very easy in my new Hobie Outback equipped with the MirageDrive 180-degree system. The new MirageDrive makes it easy to drift the banks and weed edges when chasing fish. I was rewarded with a 46cm bass on the surface presentation. It was getting late in the morning but I decided before I went in I’d work further with the wind to where another small island had the breeze blowing onto its shoreline. As I arrived it looked very ‘fishy’, with bait flicking the surface. It wasn’t long before I had a missed boof followed quickly by another missed boof.

I then hooked up to a bigger barra, only to lose it when it jumped. Soon after, I hooked and landed another 58cm fish. The barra seemed to be travelling in groups and if I could get a hit, most times I was rewarded with multiple strikes. Back at camp, the others had tales of mixed fortunes, with all but Steve landing barra for a total of eight captured. It had been a successful morning. The breeze strengthened to a howling southeaster at 25-30 knots throughout the day and it was looking like being more and more difficult to fish in the kayaks. However, late in the day Steve and I decided to give it a go straight across from camp.

It was extremely difficult to fish in the wind and it was blowing the kayaks too fast. Our only option was to work into the wind but it was difficult to get any distance with our casts. I kept working soft plastics deep along the edge of the weed and was rewarded with another small barra. A quick photo and release and I’d still been blown about 60m from where I’d caught the fish. I peddled back to the weed edge and landed a barra first cast – the fish were definitely working in schools.  The wind, however, was making it far too difficult, so we gave it away until the next morning.

Our last morning dawned a lot calmer and I started by again following the breeze and worked the surface with topwater lures in the low-light period. Three surface hits with one hook-up for the one fish is an exhilarating way to start the day, especially when some of the hits were only 3-4m from the kayak. I worked my way back to see if Steve had broken his duck on barra. He’d only had two missed surface strikes but was keen to keep persevering and had decided to change to a soft plastic. Finally, I heard him yelling and looked up to see a Lake Lenthall barra dancing across the surface in a solid hook-up. It was a long few minutes but eventually he had it in the kayak – his first barra and as it turned out, the biggest for the trip at 78cm.

We continued to fish to the end and as luck would have it, Steve landed another smaller barra. He was a very happy angler. The others in the boat had captured a couple of fish too, so everyone was happy and had smiles on their faces. It had been a great couple of days with everyone catching fish and enjoying good times that we’ll be able to talk about for a long while.

To book a campsite at Lake Lenthall, contact the Lake Lenthall Ranger Office on 07 4129 4833. It only costs about $7 a night for each person. Short-stay camping of up to three days/two nights is available and the maximum number of campers at any one time is 18 as well as up to six self-contained camper vehicles that have waste-storage facilities. The number of campers is limited to provide a balance between community access for recreation and to protect the reservoir and catchment environment as the main drinking water source for Hervey Bay.