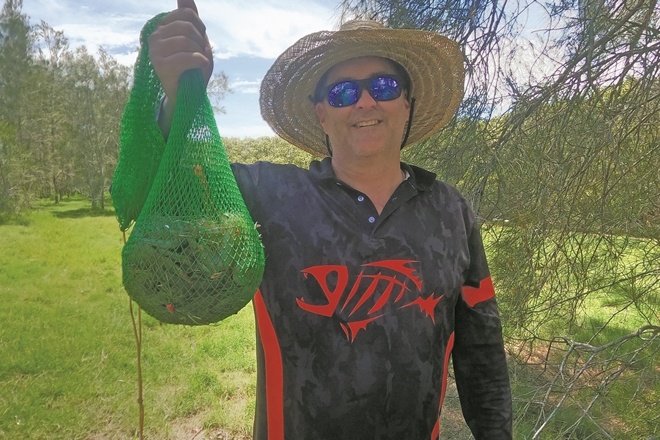 Well short of the bag limit but still a nice feed of banana prawns in early February.

Prawning time from the boat or on foot

IT’s fair to say that March is one of the peak months for prawns in southeast Queensland. Hopefully by then the catches will be a bit more consistent.

Speaking to a few regular banana prawn fishers from the northside of Brisbane, this season started very late and, at the time of writing which was the end of first week of February, occasionally prawns had been in the rivers in numbers, while on other days it had been much harder to put together a feed.  Let’s hope we have more rain to concentrate the prawns in the deepest holes and to push them out into the bays. Prawns boat foot

For first timers to catching banana prawns, top pocket nets are your best bet because the prawns try to escape upwards in the net when caught. The trick is once your net is on the bottom – which you can tell by it going slack – hold the rope on your net firmly and give it a few short pulls, this will scare any prawns the net may have landed on upwards and into the top pocket of the net.

Top pocket nets are easily emptied, with a draw string at the top to open the net from above and empty into your Esky or bucket. Also, get a good quality net with heavy chains on the bottom, this helps to minimise tangles and allows it to sink faster. Bottom pocket nets are better for catching baitfish for fishing.Prawns boat foot

Top and bottom pockets can be a nuisance when prawning due to the time it takes to empty the bottom net, as well as catching a lot of twigs and unwanted by-catch. The best time for prawning can be the hour or so either side of the tide change when prawns concentrate in deeper holes. Usually, banana prawns are considered the domain of boat-based prawn fishos with cast nets.

However, land-based anglers can try their luck for banana prawns at this time of year in deep holes close to riverbanks and boat ramps or off jetties and wharves. Finally, when it comes to eating these yummy critters one of my favourite meals is white French loaf bread, prawns and my home-made thousand-island sauce – I’ve included a picture with the three ingredients.Prawns boat foot

Tiger and Bay prawns – on foot!

One of the lesser-known tactics for land-based prawn fishers is catching bay and tiger prawns on foot in the shallows of Moreton Bay. These prawns can be located in very shallow water – often less than 60cm deep – at low tide at night around areas of mud, sand and ribbon weed. During the higher stages of the tide prawns are a much more difficult target, becoming spread out and the shore-based areas become too deep.

Prawns also move around much more in deeper water, rather than sitting stationary on the bottom around low tide. As a result, the best time to target them is two hours before to two hours after low tide. This is because you get less water movement – that is only one twelfth of the total tidal movement in the first hour after a tide change – for a six-hour cycle – and two twelfths of the tide in the second hour.

The other thing to be aware of is that access to these prawns is not dependent on a new moon. So, rather than being able to only chase them a few nights either side of a new moon once a month, as it is for NSW estuaries, the right tide – with low tide around or after dark – comes around every second week. One of the bonuses to this type of prawning is that you will also come across the occasional mud crab wading the shallows at night, particularly after a bit of rain.Prawns boat foot

In fact, on good nights I have caught three! Yes, scooping these mud crabs up with prawn nets is legal. I don’t go by hearsay with these things and have confirmed this directly with the Queensland Department of Agriculture and Fisheries. Apart from tide, the other key influence on prawn numbers is weather.

The best conditions for bringing them into the shallows to spot their red beady eyes is a hot still day and a calm night. The less wind chop on the water, the clearer the water is and therefore the further away you can spot them. You want to be looking for wind less than 10 knots. Before you head out, check your local area for the latest localised wind readings and be sure to get forecasts that are for on the water – not the land as per a few popular wind apps.Prawns boat foot

As the tiger and bay prawns in Moreton Bay are in shallow water and are quite spread out, underwater lights used in NSW estuaries are less effective here. Rather, a do-it-yourself headlamp is a better option. The light from the headlamp is what’s used to spot the red eyes of prawns at night.

I use a 7-watt LED lamp which is connected permanently though the peak of my cap. I run the wires between the light and a switch under the peak of my cap and then connect it to a 12V 9-amp battery in my backpack. This is very effective and much brighter than even the best headlamp on the market.Prawns boat foot

The other equipment I carry are two prawning scoop nets and a cooler bag over my shoulder to transfer the prawns after I have a few in the bottom of the nets. The key with this method of prawning is using the two nets in tandem to maximise your success rate.

Note, both Queensland’s Department of Agriculture and Fisheries and Parks and Wildlife Service – responsible for the Moreton Bay Marine Park – confirmed it is legal to use two scoop nets. Though the nets need to be in your control and not staked, plus their size must conform to the current regulations.Prawns boat foot

Before you go trudging out at night in Moreton Bay, beware – there are a few risks. You will see a lot of sting rays, crabs and a range of other ooglies. Thick sole reef shoes are a must for protection. Also, I never wade much further than knee-deep due to the risk of sharks.Prawns boat foot

This sort of prawning is not for everyone but gets you away from the crowds and under the stars, plus it’s great exercise! So good luck if you give land or boat-based prawning a go this month. For more tips, advice and giveaways, follow my Facebook page, Ontour Fishing Australia or my new YouTube account of the same name.