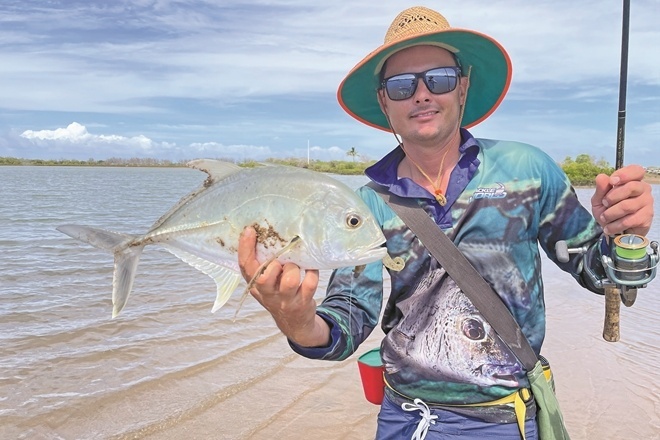 This little GT scoffed a plastic.

IF you’re anything like me, you spend far too much time monitoring weather websites waiting for the perfect opportunity to head offshore. Of course, when the weather comes good, that thing called ‘work’ often gets in the way. Then there are current conditions, swell and a stack of other variables to consider if you’re running with a smaller boat as I am. Land-based CQ

Anyway, while there’s nothing better than when an epic offshore session comes together, there can be a lot said about getting back to basics and hitting the estuaries on foot. When the weather didn’t play fair on a recent trip to Central Queensland, we did just that and it turned into an awesome few days. When prospecting for great land-based locations, Google Earth is your best friend!

It always pays to check out the area you’re keen to fish and locate the best places to access it on foot or by car. By using Google Earth, you can also assess the biggest stretches that you’re thinking of accessing by foot as well as locate deeper holes, sandbanks and other structure where you expect fish to hold. On a trip recently, we identified about 2km of estuary that we thought we’d have a good chance of covering during the bottom half of the tide.Land-based CQ

The plan was to load up with light spin gear and soft plastics and walk the creek, flicking the mangrove and sandbank edges for flathead and anything else we could entice. Arriving at half tide allowed us to get a good view of the area and assess where the water level got to at high tide. Flathead lies were identified immediately, which certainly piqued our interest and suggested that we’d have a good chance of nailing a few as the tide receded and the water drained into deeper holes.Land-based CQ

I’ve always been a strong advocate of a low tide when fishing for flathead because I feel it’s common sense that with less water coverage there are less areas for the fish to be and hence they can be targeted more easily. Others swear by fishing the shallow flats on a peak tide as flatties get up on the sand banks to feed. Each to their own I suppose. We were almost at the first stretch of river and there was a nice deep hole with a little tidal flow through a deeper drain and a few tree branches scattered around – the perfect looking scenario for a flathead.Land-based CQ

Sure enough, it didn’t take long to hook and land one in the mid-50cm range – we were off to a good start. There was an absolute abundance of bait present as well, which made for more excitement. A group of us were fishing and we all went our own way, so we covered quite a bit of ground by chipping away, with a few nice flatties caught. While fishing, we also scouted a couple of nice areas we thought would hold good whiting at night.

I persisted with a 5” Z-Man StreakZ curl tail in Bad Shad, convinced it might be the lure that enticed a bigger fish and I wasn’t disappointed! As I slowly skipped my plastic back over the edge of a deeper drain, it was greeted with the customary clunk of nice flathead engulfing it gleefully. The strong initial run into the shallow water followed and a few minutes later, after a nice fight on the light gear, I was sliding a nice 73cm flathead up the bank. A few pics and off she swam to have a sulk before harassing more bait.Land-based CQ

With the flathead ticked off, we returned the next night just on dark with whiting gear and yabbies in tow. My plan for the evening was to rely on the fishos catching a few legal whiting, which I would use as live bait in the deepest part of the creek. The whiting weren’t prolific but there were certainly enough around to keep us busy and to scratch my ‘live bait’ itch. I rigged up a legal whiting on a set of snelled 4/0 BKK hooks and deployed it in the deepest part of the creek.

There were several massive surface ‘boofs’ in the vicinity of my bait and within seconds, the 20lb braid was screaming. A massive queenfish got aerial straight away and made a beeline for the sticks as I held on for the ride. I managed to gain a bit of control of the fight and after a great battle, I was holding up a beautiful queenie just shy of the 1m mark. Apart from a few nice whiting, that was the only real highlight for the night, but we had certainly uncovered a great little land-based spot, which will no doubt be visited again in future!Land-based CQ

So much can be said for prospecting new areas and simply getting bait and lures in the water! Only a couple of weeks before this trip, my friend Kane was drowning a few yabbies along a surfside rock wall chasing whiting when his Alvey was sent spinning by what he initially suspected was a stingray. After a fair battle on 8lb line, he was guiding a 60cm plus mangrove jack onto the sand – a capture of epic proportions. Morale of the story is… if it’s blowing a gale offshore, think outside the square and get a lure in the water, because it’s certainly harder to catch a good fish from your lounge room!

Chris grew up in southeast Queensland and chases everything from whiting and flathead to red emperor and snapper. Over the past few years Chris’s keenness for offshore reef fishing has grown into a passion. You might also catch Chris gracing your TV screens as a regular on Channel Seven’s Creek to Coast program.
Previous March joy on jacks
Next Prawning time from the boat or on foot