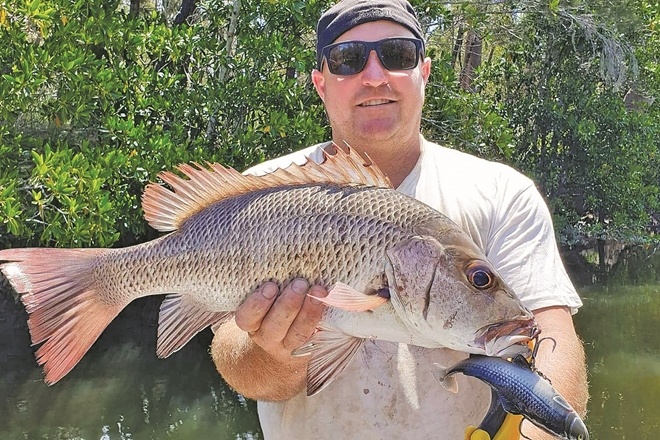 The author with a nice mangrove jack.

WELCOME to 2021 and a happy new year to all Bush ‘n Beach readers. Last year was a pretty wild ride, but thankfully the fishing side of things wasn’t affected as much as other activities. Summer started with a bang and a nasty heat wave ripped across the eastern side of Australia and pushed the temperature gauge over 40C in quite a few areas.

Constant heat can push water temperature right up and can make fishing quite difficult, especially for bread and butter species such as bream and flathead. The water in several of the smaller systems can get up to around 30C, which can shut the fish down. Warm jack

A couple of years ago, my mate Phil and I spent a bit of time targeting the creeks around Tin Can Bay for mangrove jack. On the first trip we landed 10 jack in an hour by floating pilchard halves into the mangroves. We went back on the same tide two weeks later, but a heat wave had flogged the area and the water temperature was up to 33C.

We only landed one small jack and a big cod in three hours. We could see jack swimming up the middle of the creek in crystal clear water. It looked like they were in a daze – just swimming around in circles. They certainly didn’t want a bar of anything we put in front of them. Warm jack

During extended periods of hot weather, it can be a good idea to target larger creeks and rivers, with good tidal flow to keep the water temperature slightly lower and more stable. As well as being one of the hottest months, January is also the busiest month on the water.

The borders opened up to our southern friends at the start of December, so we can expect huge numbers of holiday makers on the water in all the popular places. If I’m chasing a jack at this time of year, I prefer to be on the water before first light and off the water before the hordes try to reverse their trailers down the ramp.Warm jack

Night fishing is also a great time to target jack, whether bait fishing or casting and trolling lures. Jack have no problem finding a well-placed lure in the dark. A bit of light on the water is a good place to start looking for this species, as the light attracts baitfish. If you find good numbers of bait hanging around a light, it’s worth giving it a good flogging before moving to the next spot.

Surface lures are very addictive and species such as trevally and tarpon will also get in on the action. If a surface presentation isn’t working, try a shallow-diving hard body that gets down to around 1m. Occasionally this is enough to get a bite from fish that are hanging a bit deeper. Trolling deep-diving hard bodies among the rocks and bridge pylons at night is also an excellent way to get hooked up to a rampaging jack.Warm jack

It’s a good idea to check out areas late in the afternoon and troll into the first couple of hours of night. I prefer a run-out tide for targeting jack, so a low tide around 8-9pm is ideal for me. The by-catch tends to be good when trolling for mangrove jack with deep divers. Cod are high on the list, with trevally, tarpon, grunter, jewfish and flatties all keen to have a crack at them.

The Atomic Hardz Shiner 85mm Double Deep is an excellent lure for trolling. These lures get down to over 6m and swim perfectly out of the box. I change my trebles over to VMC Fishfigher 6X, which allow the lures to still float. A floating lure is very important to help avoid snags.Warm jack

I’ve used these lures many times on big barramundi and mangrove jack and have never had the rings split or lure failure – they just keep going, and the more scratches and bite marks on them, the more fish they catch. That’s it from me this month.