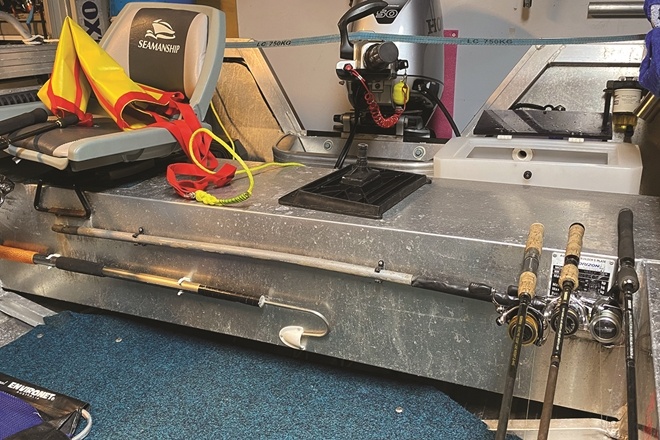 Store your items securely and within easy reach.

SUMMER is here and that means it’s mackerel time! It’s been a long year and I haven’t spent nearly as much time on the water as I’d liked in the Aquaholic. But after doing the full brake service on her, I thought I’d show off the baby of the fleet Banter.

Banter is a 435 Horizon EasyFisher that terrorises creeks and offshore reefs, usually with my young son Mitch aboard. The boat was bought as a bare hull, with a few minor modifications that the team from Horizon were only too happy to accommodate. Horizon Boats offshore

We had the hatch up the front made to a specific size, allowing us to get a 40L fuel tank in there and ensuring that the weight would help in balancing the boat. There was also an additional step and handrail put on the rear and an electric motor mount on the front.

The boat is full plate, so for a 4.35m she is heavy – about 100kg heavier than the Quintrex 4.2m Dory and significantly wider. With the wide beam you get a solid, sure-footed ride and the slapping is significantly reduced with the extra weight.Horizon Boats offshore

The boat was originally fitted with a 30hp Honda and while this pushed the boat along fine, once you loaded it up with an Esky, ice and another body, it soon become apparent it was under powered. The team at Silver Service Marine at Burleigh Heads set us up with a 50hp Honda, and wow, does it hook now!

Fitted with a SOLAS stainless-steel propeller, the boat leaps to life when the throttle is put down.

We made a modification to the tiler handle setup, with a 60hp handle being fitted so the trim and tilt were on the end of the handle, making single-hand operation simple. This is in contrast to the trim being on the side of handle, requiring you to use your other hand or release the throttle.Horizon Boats offshore

Neither are ideal when crossing bars. The battery for the electric is also up the front and wired in, so it can be totally isolated from the main battery with a flick of a switch when using the electric. Again, the extra weight up the front balances the boat.

The 30L live well is fitted to the passenger side in the aft and provides ample space to keep big live bait alive. The water pickup and pump are external to the boat, mounted on the transom. In an open tinnie, if you cop water over the front, you want to be able to get rid of it quickly.Horizon Boats offshore

The Rule LoPro 900 GPH automatic pump in the bilge does the job nicely, with a 1” outlet hose carrying any water quickly out of the boat. The boat is fitted with good quality electronics, with a Garmin sounder, VHF radio and waterproof switches fitted. I cannot stress enough the flogging your gear gets in an open boat, so it’s better to step up a bit for better quality than trying to penny pinch.

As they say, “a poor man pays twice.” On the transom, there are two LED blue squid lights fitted and these serve two purposes. The first is obviously for squidding at night, and the second is so boats can see you when you’re under way – especially when they’re right behind you, as the navigation lights become harder to see.Horizon Boats offshore

Speaking of which, LED is the only way to go. The boat has lighting under the gunwales and the pockets, and these can be individually switched to give either full lighting or a nice glow, so you can see what you are doing without being blinded. Also up the front, we have the anchor light socket fitted along with the VHF antenna.

I opted for the stubby antenna, so it wouldn’t be in the way when casting. The anchor well is big enough to fit the anchor and plenty of rope, and the bow sprit roller makes life easy for the drop and retrieve. Rod holders fitted on the both sides of the boat give many options, and the Scotty rod holders have every configuration imaginable.

One of the best additions is a Scotty cutting board. If there was ever an accessory that is a ‘must-have’, this is it. With deep pockets, they are big enough to store your tackle and tools such as pliers and knives. The gaffs are mounted for easy access on the rear seat and the points are protected with caps.Horizon Boats offshore

The boat is big enough to fish three people, but two would be preferable – particularly when carrying a 100L Esky and ice. Mitch has started to lean towards a fish bag because this can be folded to save space and when it’s full of fish, it doesn’t take up as much room as an Esky. The boat is extremely economical, with 40L giving more than enough reserve for big days on the water.Horizon Boats offshore

It can be a bit daunting going from a 20’ offshore rig to an open tinnie, but once you get used to it the thrill of the ride and the bigger thrill of a huge fish from a small boat keeps you going back for more.

Until next time, screaming reels to you all!

Heath has been fishing since the age of three and grew up fishing the mighty Georges and Hawkesbury rivers.
Previous Topwater tips and techniques
Next Warmer water for mangrove jack