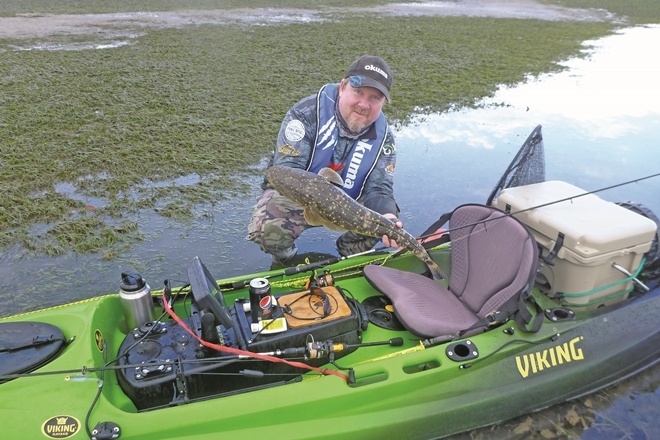 Three casts into Sheri's Plan B and a 70cm plus flathead was landed.

Prepare for Plan B

IT has often been said “It’s called fishing, not catching,” especially after a session that wasn’t overly productive… or even worse, a dreaded donut, zilch, zip, nothing. Over the years, I’ve managed to avoid donut days by having a Plan B – and often even a C, D and E – just in case the chosen technique, location or species doesn’t fire. Plan B

These backup plans have produced personal bests, hot bites, new species and a feed of fish on more than one occasion, so remember to keep other options and backup plans in mind when preparing your adventure, and spend a little time researching these backup options. I’ll share a recent adventure with you soon, but let’s look at a few variables beforehand that you may wish to consider when planning your adventure and B, C or D options.Plan B

We often head out with our heart set on catching a particular species, maybe threadfin salmon, barramundi or longtail tuna. However, it is worth carrying a selection of gear to suit a variety of other species, just in case your chosen species is not on the job. I’ve had tailor sessions turn into hot spinning queenfish and trevally sessions, bay tuna sorties turn into snapper battles and flathead expectations turn into blistering bream bites.

You could keep grinding things out for your target species, but don’t forget there may be another species there keen to feed. Pay attention to what is going on around you and adapt to what’s feeding on the day. If you’re fishing deep and there’s action on the surface, try spinning lures or drifting bait closer to the surface.

If you’re throwing larger lures for flathead with no luck and getting plenty of smaller taps, try downsizing and you may score bream or grunter. Carrying a selection of jig head weights and soft plastic sizes is a great way to cover many bases – I also carry at least a light, medium and heavier spin combination in the boat. You may even get away with the same combo, but simply switch the leader size to target a different species.

I have been guilty of leaving home before with a single technique in my head and all the rods pre-rigged for this method, only to find it’s not happening on the day and I need to make the call to change things up. My mind may have been fixed on blading deep structure, picking the pockets in the weed with lightly weighted plastics or swimming heavily weighted plastics down deep drops.Plan B

By the end of the session, I’ve changed techniques, re-rigged rods and managed to land plenty of the target species using a completely different method. A few examples would include switching from metal lures to soft plastics in the surf when the tailor were finicky, changing from paddle tails to soft plastic surface frogs when chasing barramundi, and switching from jigging to throwing stickbaits or poppers offshore.

It’s amazing how a change of presentation or technique can be like flicking a switch between a quiet session and absolute mayhem.Plan B

When selecting a location, when making a plan and when pondering backup options, consider the tide and weather. This will give you an idea of windblown backs and sheltered spots, along with possible fish holding structure within range of your vessel, and viable access points and accessible waters in the area. Consider what other locations and species are available in the region also.

A northern adventure to chase giant trevally and reef fish could be a complete write off due to wind, or it could be your best trip ever on impoundment barramundi, so pack accordingly. Occasionally it’s just about making the call and knowing when to hold them and when to fold them. Do you keep grinding it out or switch things up?

Time on the water and fishing experience often make these decisions easier, however there’s always the ‘what if’ in the back of your mind. So, whether you choose plan A, B, C or D, it’s important to stay confident, stay pumped and if you’re fishing with friends, keep a positive vibe, enjoy the adventure and take in the surroundings.\Plan B

My wife Sheri and I planned a short morning kayak session recently, with the plan to fish a shallow drain on the backside of a large sand and weed bank. On that occasion, we had no real backup plan because we were only heading out for an hour of run-out and an hour of run-in tide.

It turned out that we missed the tide and didn’t have enough water to sneak through into the drain, at which point I threw my toys out of the cot and made the call to just drift down the outside of the bank to see if we could find flathead.Plan B

After half an hour of no bites, no bait activity and negative vibes, Sheri made the call to go to Plan B, which she decided was a 10-minute paddle to a completely different bank where we had caught fish in in the past. I mentioned that we would only have half an hour of run-out left and maybe we should just grind it out, to which she started paddling off towards the other bank.

Well, the move to go to Sheri’s Plan B was a good one and within three casts my rod was bent, drag peeling and I soon had a hefty 70cm plus flathead in the net. Sheri had a big smile on her face – knowing it had been the right call and stoked to see a quality fish landed.

We continued to drift the edge and 15 minutes later a cast into a drain had the little Z-Man 2.5” Slim SwimZ collected by a fish that hit the afterburners, raced out of the gutter and took to the air. I had hooked my first queenfish in my local waters!Plan B

After a dozen jumps and runs the 70cm plus beast of a queenfish was photographed and released to join the flathead released earlier. Whether the moral of the story is to always listen to your wife or to change things up if they’re not working, remember to always have a Plan B – along with the gear and confidence to execute that plan.

Be flexible with your fishing, whether that means a switch of location, a different target species or employing a different technique.

See you on the water…