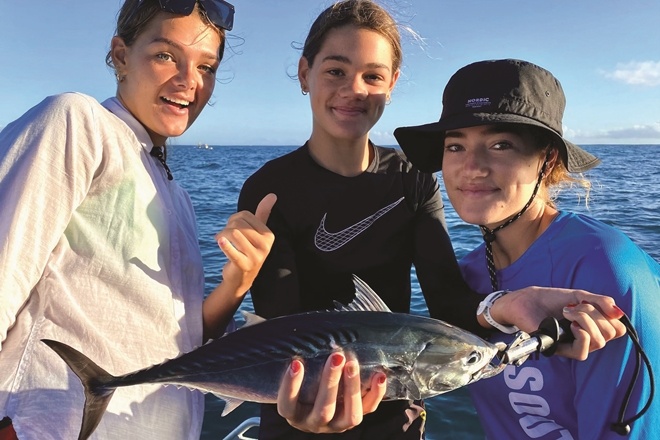 Fleur, Georgia and Giselle with a mack tuna.

HOW many of you have ever taken your fishing outside of your comfort zone and done something a little different? We’re quite comfortable taking out the regular crew for a regular fish in the same old spot for the same result, yes? Well, that’s what I thought too but then with everything going on over the past year and so many of us having to make big changes to our lives including our fishing life, the comfort zone wasn’t quite so comfy. Offshore different

With fishing being a way of life for many of us, I thought it was time to do things a little different and ask a few young female anglers if they wanted to try fishing offshore. Well, I didn’t need to ask twice. In fact, they had been asking me for years. We met up at 4:00am, which for teenagers may as well be the middle of the night but that’s just the way it is.

Our first target was for jewfish, so we collected bait on close reefs outside the Gold Coast Seaway. These bait reefs are well known and there are plenty of GPS marks for them all over the internet. We headed out and filled the live bait tank in the back of my Bar Crusher with medium size yellowtail scad. Once we had enough bait onboard, we headed back to a spot near the Seaway where I had marked fish on the sounder during the drive out.\Offshore different

We used a rig that was just 2 x 5/0 octopus-pattern J-hooks snelled 8cm apart with 60lb ANDE leader and a running 2oz limo egg sinker from United Tackle Australia. The bait needs to be rigged with the head of the yakka in near the sinker so that the bait swims correctly. Don’t put live bait on backwards. You’ll kill it and probably won’t catch a fish.

The fishos were totally pumped by this stage and having three of them onboard was a bit of a social media photo overload. Fortunately, within a few minutes Fleur had baited up and we were drifting a livey into the zone. As we drifted, I watched the sounder and started to see the jewies on the bottom. Within a few seconds she got absolutely drilled. The rod folded under the boat and it was all on.Offshore different

The drag is almost locked up with this type of fishing because the bait is fished on the bottom and very close to structure. For her first ever big fish, she fought it better than a few of my friends could and a few minutes later we had it boat side. The excitement on the boat was unbelievable and as we brought the big silver slab onboard, all three anglers were cheering and reaching for their phones for a photo.

We released it safely and started the procedure again. Gisele was next and for each drift over the next hour we scored fish after fish. Everyone got a turn on the rod and I’d be surprised if the whole Gold Coast didn’t hear the screams of joy that day. We took a couple for a feed and decided that we should go back to fillet up our catch. We hadn’t long been home and another angler turned up at my place.Offshore different

She had seen the photos we had sent and wanted a piece of the action. I couldn’t say no, so said we would do something very special in the near future. I had planned something even many of my closest friends hadn’t experienced – the fishos were in for a trip of a lifetime. I told them to meet me at 3:30am at the same place the following week and with big smiles on their faces they all willingly agreed

A week later we met again, this time taking my son Bailey. Two eager faces were awaiting beside the boat that I had prepared the night before. We launched and I proceeded to tell them to get comfortable because we were in for a 30km trip out to sea. It was still dark, so I took extra caution crossing the bar. We set on 24 knots for the run out and by the time it was first light, the anglers were asking what we were going to be targeting.Offshore different

I told them the target for the day was snapper. The spot we had travelled to was only small and extremely fishy. I visit it only occasionally, simply out of respect for what it has provided for me over the decades. We baited up using the left over yakkas I had frozen from the trip the previous week. We used the same rigs as we did for jewfish basically though dropped the sinker size down to a 3/4oz pink limo egg sinker from Full Scale Tackle.

The rods were Daiwa Saltist BW 64BJB-AO PE2-4 rods matched with Saltist LW20H-C reels. First light was on us and I knew the fish were probably on the southern side of the mark, and we were able to confirm this by doing a test drift over the spot. That allowed us to not only set up a drift line but also to see where we needed to start deploying, so that the snapper and bait would end up in the hot zone.

Big snapper will swim almost halfway up to nail bait, so don’t rush to get it to the bottom. We circled back around and started the session, with Fleur going first. I knocked the motor in and out of gear to keep a good angle on the line, and we could see her offerings slowly wafting down on the Lowrance HDS LIVE. The Airmar TM185M 1kW transducer I use picks up everything and we were watched the fish come up off the bottom at about 15m to smash the bait on the drop.Offshore different

Boom! As anticipated, she was on to a big fish. This was the fishers first big snapper and once again the excitement grew as it was reeled in. It pulled drag and resisted with those big head bumps typical of a big knobby and within a few minutes, excitement once again erupted onboard. A big pink monster blew its bubbles a few metres down and proceeded to float belly up to the surface.

Bailey leaned in with the net – we knew then it was going to be a good size because it hardly fit in the net. We placed it on the floor of the boat and the fishos’ joy was overwhelming. Thinking this was going to be their only fish, they proceeded to take pictures. I told them we needed to keep fishing because the fish were on the bite and the window of opportunity was short.Offshore different

Bailey got that one on ice while I drove us back to the top of the drift. At this drift we dropped two down and as expected, a double hook-up. We continued float lining for a few more drifts and within 45 minutes we had two over 70cm and the rest from 56cm up. What a memorable experience for the fishers, it was an adventure they will never forget. It’s like this… try to think of fishing as a big jigsaw puzzle.

I can give you all the pieces – the bait, the tide, the moon phases, the GPS marks, all the rigs to use, everything – but it’s up to you to work out how it all fits together. If you’re missing just one piece, it won’t work so well. Do your homework and you will have plenty of success and enjoyment. Enjoy your fishing during March, it’s certainly started off way better than 2020, and if you see me out there come say hello.

Click here for the GPS marks of the new artificial reef off the Tweed.

Previous Prepare for Plan B
Next Avoid a fine this Easter