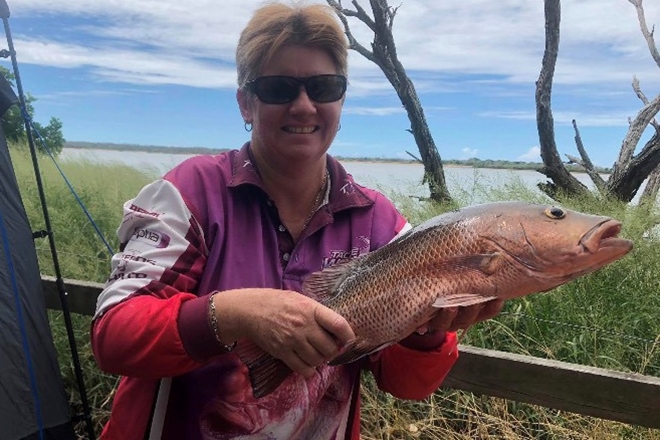 Sandi Holzel with her first mangrove jack at 42cm. Caught in the Kolan River recently.

This weekend, it looks like we’ll see the fishing restricted to the local Bundaberg estuaries and impoundments due to the wind that has been generated from the low pressure system that has slipped down the Queensland coast during the week.  Remember, if you plan on going fishing, always check the latest weather forecast before heading out as conditions can change very quickly.

With the offshore fishing restricted by wind, it is great to see the Burnett River starting to clean up and plenty of fish on the chew.  Good numbers of flathead have been caught between Rubyanna and the mouth of the Burnett, with the Berkley Powerbait 4” Nemesis accounting for heaps of nice flatties.  Estuary cod up to 60cm are still along the North Wall, so make sure your gear is up to scratch so they don’t bust you off.  There are heaps of under-sized trumpeter in the Burnett at the moment but anglers putting in the effort have been rewarded with a few crackers over 50cm.

Both the Kolan and the Baffle have been crabbing very well over the past week with the bigger tides.  Some massive whiting were caught on yabbies and beach worms on the shallow sand bars towards the mouth of both systems as well.  Mangrove jack have slowed a bit but should improve as the Kolan and Baffle both clean up.

If you’re keen for some surface action, the Isis Impoundment (Lake Gregory) has been producing some quality bass and saratoga early morning.  Once the sun rises you can target the weed edges with Spinnerbaits.  Some nice bass have also been caught on small blades and soft plastics in the main basin.  This small impoundment is an excellent place to refine your skills and to try different techniques.

Last Friday, the Monduran Anglers and Stocking Association released another 73,000 barramundi fingerlings into Lake Monduran.  Most of the boats were fitted with oxygen bottles to keep the baby barra healthy and run them a lot further up this fantastic impoundment.  March, April and May are my favourite months to fish Lake Monduran and with the average size of the barra being caught better than 80-100cm, it promises to be an exciting next couple of months.  For the latest information on Lake Monduran drop in store or give me a call at Tackle World Bundaberg.