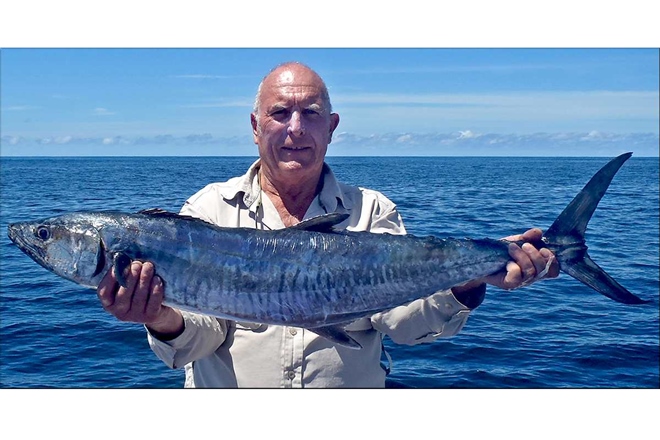 It appears that all things that start off great come to an abrupt end from a weather point of view. We finally had some cracking weather days which saw light winds, light swell and a clearing of the sea from dark brown. With the start of the weekend there was a great weather window that soon faded away to 20 knot winds and rains, but there is a positive so read on…

Offshore those who went out picked up some standout reefies including snapper, pearl perch, venus tusk fish and sweetlip from the local reefs. Sunshine, Halls, Chardon’s and North Reef all played their parts. The main species on the chew were medium sized Spanish mackerel around 12-17KG which were all along the inshore reef line. They appeared to be from Noosa all the way toward Coolum.

Often fussy these medium sized spanish mackerel were not, and on Saturday morning before the weather turned many an angler hooked into quality mackerel with the odd tuna and spotty thrown in for good measure. These fish were taking trolled baits and literally coming out of the water for them! They were also hitting stickbaits like the Shimano Rockslide, Slugs like the Halco twisty in 20-30 gram sizes as well as deeper diving lures like the ever faithful Qantas coloured laser pro.

With the offshore scene now on hold the Noosa river is still featuring good sized flathead in solid numbers around the rock wall and the drop offs in this area. These fish are a great target for anyone starting out on soft plastics so be sure to come in and ask us how to get started. Mangrove jacks are still present but a little harder to get a bite from. The weekend for those who braved it did see a stronger pre full moon bite, but mainly during lower light times. The fresh mullet we have has been working great with smaller 3/0-4/0 octopus hooks.

Much the same as flatties the jacks have been found in the lower estuary. Further up the waters are still quite fresh and there are a few schools of undersized jewies getting around as well as bream and various trevally. Try fishing from the public jetties along Gympie terrace for bream and even whiting as they love the sand flats that are part of this area. During cooler dirtier waters the whiting will be taking beach worms more readily so be sure to grab a pack on your next visit.

One great part of the rains is that the mud crab march will continue to run. Many fisho’s have come back with decent crabs from all systems so be sure to laod up on fresh mullet and get your pots in. Don’t forget to tie them down and keep them away from the main flow of current as we see the full moon in a few days.

The freshwater scene remains quiet and with the Annual Tag a Toga comp on this weekend at Borumba we should have a better idea on what has been biting and where. The recent rise on water is seeing a lot of grass floating on the surface which can ruin well placed surface lures. This is a great time to fish diving lures and slow rolled soft plastics in the 3” paddle tail size. For a lure that has a great swim take a look at Berkley Nemesis in bloodworm. This has a great action when jigged and is sure to get the attention of any passing or schooled up bass or yellow belly. The Chasebaits mudbug is also another great option for those looking to mimic a small red claw. Lake MacDonald has been over flowing for weeks now and is also rather quiet. It is a case of having a few lures out the back like the Rapala Jerkbait shallow and Ecogear SX48 and running sounders while trying to find the fish. The usual spots of the bubble trail and 3 ways appear to hold fish but they are definitely on the move so good luck.