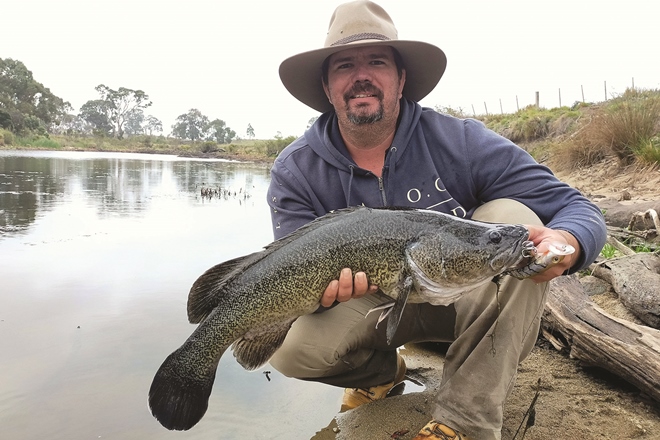 Tony with a decent fish taken on a paddler during light rain as a storm approached. At normal levels, the water would be over his head standing there.

WHILE penning this piece relating to fishing the western watershed streams during the grip of one of the most prolonged droughts in living memory, just for contrast, rain is falling across the region concerned.

Here too in the southeastern corner of the sunshine state we’ve been blessed with liquid sunshine, albeit in lesser amounts than those of us in rural areas would like. Winding the clock back just two weeks saw number two son Tony and I arrive in a cloud of dust at our destination in northern NSW.

Catalyst for the trip away on this occasion was to celebrate my birthday in my chosen style: a fishing/hunting trip spent in the swags away from civilisation. Conversations with the landowner in previous weeks had advised of exceptionally low river levels and cautioned us to expect very little in the way of fish on these western watershed streams. We were both fine with that possibility and on previous outings to drought-affected localities had ceased fishing if the cod showed any signs of stress due to low water levels.

Even if the fish weren’t biting, we had the option of chasing a few bunnies, which we figured would be easy to see in the short, sparse grass of the grazing paddocks. After a quick hello and handshake, we were pointed to a track though a paddock where we could access the downstream part of the river on the property. At the river, we were greeted by the sight of disappearing waterholes where I’d previously enjoyed great fishing.

Even the pool where I’d caught my largest cod on this property was completely dry, leaving no doubt to what had become of a significant percentage of the river’s resident fish. I mentioned to Tony that there would be some very fat white-bellied sea eagles in the area, so all was not totally wasted. After pushing through rough tea tree and boulder-strewn scrub we at last found a plunge pool below a high set of cascades that held water.

As Tony sent a few casts along the length of the pool, I sat on a rock in the shade watching, confident he had a very good chance of a strike or two. Several boils beneath his shallow-running lure proved at least one cod in the pool was interested in feeding. Almost inevitably, the aggressive little cod made good its assault and found a barbless hook instead of lunch. That fish’s activity must have grabbed the attention of the other fish in the pool because two others were hooked and released in the next 15 minutes.

No more fishable water was to be found at that end of the property, so we bush bashed our way uphill to a couple of larger pools I hoped would still be fishable. Though it hadn’t rained in weeks, as we walked to the first of these pools left of the western watershed streams, thunder was booming from a dark cloud beyond a nearby mountain. Pool number one was unfishable, with little depth remaining and copious amounts of floating green filamentous algae on the surface.

By the time we reached the next waterhole upstream, the dark clouds were overhead and a few drops of rain dimpled the water’s surface. Here there was at least enough depth that we couldn’t see the bottom, and pockets of water were clear of algae. Shallow-running lures were a must, so I clipped on a Creek Cobra while Tony chose a surface paddler.

Precision casting allowed lures to be sent into those clear pockets and fished slowly back before becoming loaded with green slime close to our feet. With the lower light levels, the cod decided to come out to play and it wasn’t long before we were both encountering fish.

I landed a few average fish for shallow rivers and was pleasantly surprised to see that while very lean, the cod looked remarkably healthy. Tony performed his usual act of landing the fish of the day on his paddler, a dark-coloured animal well over legal length. Shortly after releasing that fish, the heavens opened, so we high-tailed it back to the ute, not wanting to become lightning rods via the graphite conductors in our hands.

The storm turned out to be a bit of a fizzer, with just enough rain to get us soaked on the way back to the vehicle. We spent the evening chasing foxes, which seems to be a never-ending task on sheep properties and managed to take three out of the ecosystem before turning in after midnight. First light saw us out in the paddock again, this time doing some pest animal management on the local rabbit population.

Tony was on the trigger and soon had enough plump bunnies to fill the Esky, so we were able to head back to camp and pack ready for our departure. Being my birthday, I just had to land a fish on the western watershed streams, so after our gear was loaded and we’d said farewell to the farmer, we drove down to the river for ‘one last cast’. Unintentionally we swapped tackle boxes, so I clipped on one of Tony’s little StumpJumpers while he chose a red Creek Cobra from mine.

Midday under bright sunshine was not the best time to be trying to lure a cod, but we persevered and I got my birthday fish from the submerged stones at the tail end of the pool – mission accomplished. That colourful fish was quickly followed by another smaller but equally aggressive little cod. True to form, Tony pulled a lump of a fish from the same pool, just metres away from me to score the fish of the day yet again.

Postscript: 10 days after we visited, the river had a fresh running through it, topping up pools and giving the resident cod an 11th-hour reprieve from the drought.