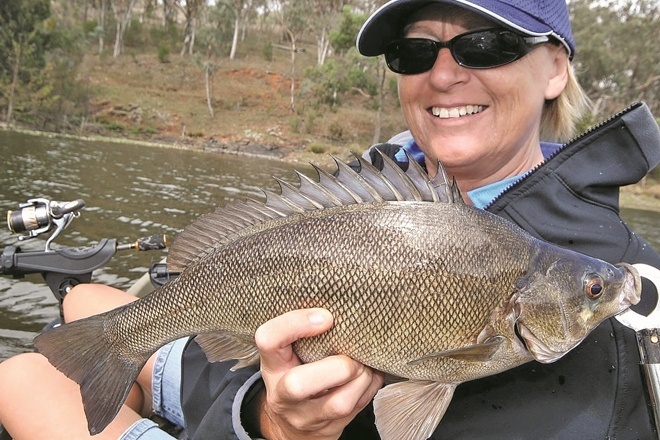 Christine Arnold picked up this solid silver perch on a sinking bib-less rattler in Connolly Dam.

IF you were designing an ideal freshwater sportfish, what qualities would be prerequisite? It would obviously have to be a tenacious fighter capable of dogged resistance and long hard runs. It would need to be responsive to a range of angling methods including lure and fly, but not be so easy to catch that it becomes boring. silver perch

It should be at home in swiftly flowing streams, quiet pools, expansive lakes and farm dams. It would need to be pleasing to look at, firmly muscled with a bright eye, handle well and be readily hatchery bred. Its diet would need to be greatly varied to allow it to thrive in a wide range of habitats.

That fish is not on a genetic engineer’s drawing board. It is alive and well, and living in most of the temperate freshwaters of eastern Australia. Its name? The enigmatic silver perch or bidyanus bidyanus. Silver perch became available to the angling masses after hatchery reared fingerlings were released into public lakes, beginning in the mid-1970s. The 1980s – prior to the advent of bass stocking – were really the halcyon years for silver perch in sub-tropical Queensland, with many hundreds of thousands of them stocked and growing in man-made lakes.silver perch